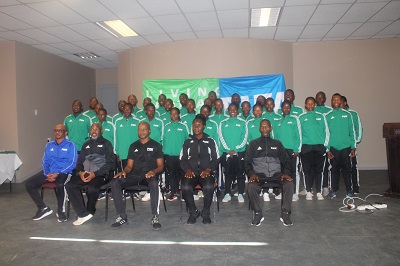 The course had attracted 30 participants coming from across the ten districts of the Mountain Kingdom and were facilitated by FIFA instructors; Mrs. Gladys Lengwe (Technical Instructor) from Zambia, working alongside Mr. Bento Navessee (Physical Instructor) from Mozambique.

This was the first international training course for referees, aimed at improving the play of both male and female footballers in Lesotho.

The training commenced with fitness tests last Monday morning, targeting referees that are between the ages of 17 to 28 years, followed by the official opening the same day.

Speaking at the official opening, Lengwe disclosed that it was FIFA’s goal to develop refereeing in all member associations. She said refereeing is for both males and females, adding that FIFA had resolved to include three female referees for the upcoming 2022 World Cup in November in effort to allow equality.

“If they can do it, you also can! So the honor is yours to take up this mentorship and work on it so as to improve yourselves,” stated Lengwe while addressing female participants.

LeFA Technical Director Letsie Notsi urged the referees to take the course seriously and use the acquired information to boost their skills and improve football in the country.

On the other hand, LeFA Deputy Secretary General (SG) Chris Bullock also advised them to embrace the opportunity and use it to learn from one another.

The participants were awarded certificates of completion at the end of the training course on Friday.

In an interview with Informative Sport, a 23 years old female referee Nkhobe Makhetha from Quthing, who commenced assistant refereeing in 2017 and now a Premier League assistant referee, revealed that she was delighted to have received the golden opportunity together with other young referees.

Makhetha further promised that they will implement the acquired skills during the training sessions and classes to their games for fairness and proper regulation of the games. “We are going to share the information with our fellows who did not make it for the training course, but above all, we are going to share them with players and the teams for betterment of football, she said.