Flames returned at BNS since 2019 when they played Morocco. It was a game which they started well in the first half looking for early goals. 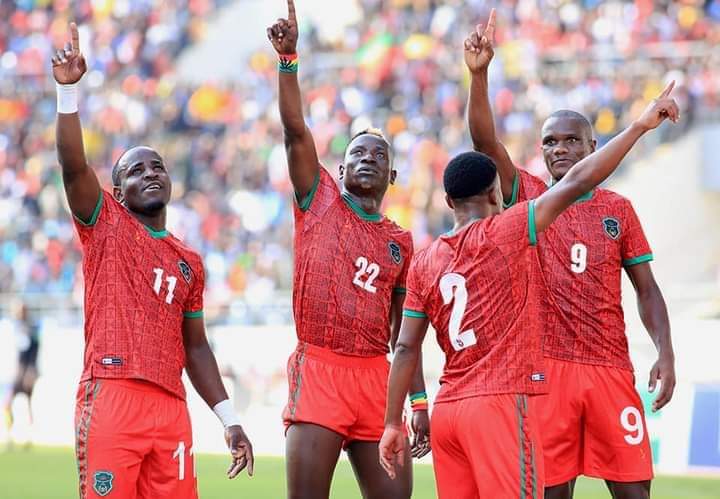 Coach Mario Mariana Marinica fielded three Strikers Khuda Muyaba, Stain Davie and Frank Hellings Mhango who seem to have coordinated well as they kept on feeding one another beautiful balls.

At 9th minute Stain Davie was fouled as he launched dangerous attack with Amazulu FC’s new catch Frank Mhango and the South African referee blew on a spot for a penalty.Gabadihno made no mistake but sending Wallias goalie Fasil Gebremichael of Bahir Dar City FC to the wrong direction. 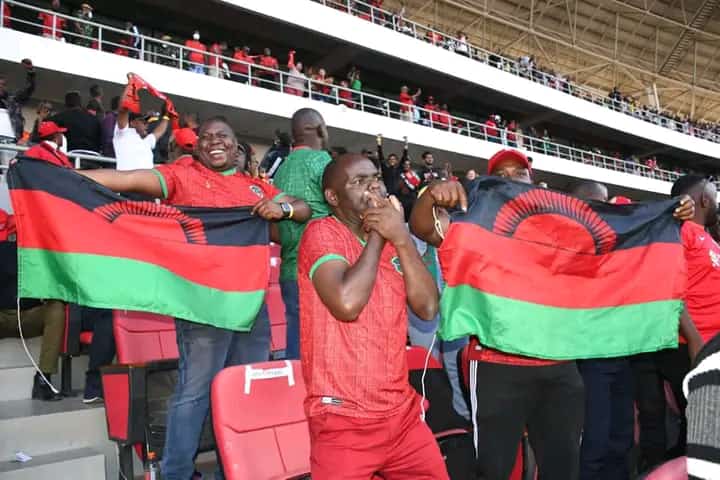 This time Ethiopians were paralyzed with the Flames style of play but managed to keep ball possession than the host.

Mhango’s 35 metre drive went over the cross bar at 25th minute. It was from almost the same position he scored against Zimbabwe in 2021 continental Showpiece in Cameroon YAOUNDÉ, he thought he would do the same at BNS but it wasn’t to be.

The Ethiopians came so closer to score through their danger man Abubaker Nassir of Ethiopian Coffee FC who saw his effort being cleared by Lawrence Chaziya who plays his trade in Jordan at 31st minute.

Soon after missing this chance, the Wallias conceded another penalty after a foul on Frank Gabadihno Mhango who received beautiful ball from Davie, he quickly converted it at 33nd minute to put Marinica’s side ahead with two goals despite leading Flames had problems in the midfield where Gerald Phiri Jnr, John Banda played. Phiri Jnr was too slow contrary to Marinica’s philosophy, which is Play Fast.

The back four for Flames consisting of Lawrence Chaziya,Dennis Chembezi,Stanley Sanudi and Gomezgani Chirwa was so solid denying the lethal strikers of Ethiopians chances to shoot on Charles Thom’s goal.

The game produced two yellow cards one to Binyam Belay at 35th minute for a foul on Stain Davie, second yellow went to Stanley Sanudi for a foul on another deadly man to the Ethiopian side Shemeles Bekele the only professional player who play his trade in Egypt with El Gouna at 38th minute.

Charles Thom made a great save at 41st minute from the same suspect Shemeles Bekele.Abongire Thom blew for recess and the visitors were down by 2-0.Second half Ethiopia came hard looking to level the matters and force a draw.

They pressurized Malawi through out, with good passes and possession as the host kept on running up and down for the ball.

The Ethiopians made their first substitution taking out Amanuel Yohannes for Gatosh Panom trying to freeze Flames, the change paid dividend as they got a penalty at 69th minute which Abubaker Nassir converted to reduce the deficit.

Before this spot kick the Ethiopians had another golden opportunity through the same guy only to be denied by the upright pole of Thom at 62 minute.

The overworking Frank Gabadihno Mhango had his goal being disallowed at 67 for offside. Despite scoring two goals Malawi didn’t play it’s traditional football of passing and supporting but their counterparts did hence they were pinned in their own half in this half, thanks, they managed to contain the boys from Addis Ababa.

Abongire Thom blew the whistle signalling end of the match and yes,let it be known to the world, that the Flames have started the 2023 Abidjan Ivory Coast AFCON finals qualifiers by defeating resilient Ethiopia at home before President Lazarus Chakwera and his vice Saulosi Chilima with Bingu National Stadium filled to it’s capacity for the first time.

Malawi now top group D with 3 points and they travel to Conakry, Guinea to play their second game on Thursday while Ethiopia will host Pharaoh’s of Egypt on Thursday, June 9, 2022 at the same venue BNS.

Aftter the game Malawi Coach Mario Marinica said they will rectify the weakness they have discovered against Ethiopia as they will be heading to face Guinea who defeated them 1-0 in Cameroon YAOUNDÉ.

Captain of the side John CJ Banda acknowledged they did not play well but hailed his friends for the vital victory at home before the state President Chakwera hence appealed to all Malawians to continue giving the team moral support saying there is that possibility to qualify in the next year’s AFCON finals in Ivory Coast.