PARIS-(MaraviPost)-Real Madrid has been crowned king of Europe once again.

For a record 14th time, Real Madrid is the continental champion after holding Liverpool goalless at the Stade de France stadium in a 1–0 victory on Saturday May 28, 2022. 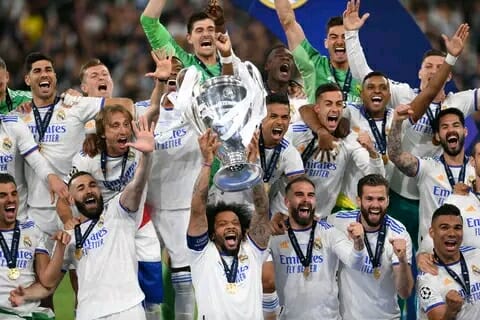 Vinícius Júnior’s 59th minute goal proved to be the difference for the Spanish giants, while goalkeeper Thibaut Courtois earned himself Man of the Match honors with nine saves on the night (a Champions League final record), including multiple spectacular efforts to deny Sadio Mané and Mohamed Salah.

Real Madrid’s Champions League run was nothing short of legendary. Real overcame aggregate deficits in stunning fashion in each of the knockout stages against powerhouses like Paris Saint-Germain, Chelsea and Manchester City before defeating Liverpool in the final.

Although he didn’t score in the final, forward Karim Benzema stole the show with 10 goals in seven knockout games, including two hat tricks to jump to the forefront of the Ballon d’Or conversation and win the Champions League Golden Boot for this season.

With the win, Carlo Ancelotti becomes the most decorated manager in Champions League history with four titles as a manager, which includes eight years in between wins with Real.

Things got off to a delayed start at the Stade de France as kickoff was pushed back by 15 minutes due to crowd congestion issues with fans still filing into the stadium.

That delay was then extended to over 30 minutes as reports were confirmed saying that police also used pepper spray to control the crowds.

But after a 37-minute delay, the game finally got underway in Paris as fans continued to file in. No shots came from either side in the first 15 minutes, but things started to kick off in the 16th minute with Liverpool pushing the pace.

Pouncing on a couple of quick chances, Salah saw two separate chances saved by Courtois, including one reaction shot directly in front of goal.

Liverpool continued to put the pressure on with a seemingly perfect chance in the 21st minute courtesy of Mané. The winger cut in past two defenders and ripped a low shot that seemed destined for goal.

But Courtois came up with a strong fingertip save that sent the ball off the post and back to the keeper to keep things scoreless.

The chances continued to fall in Liverpool’s favor with Salah getting another quality shot at goal. In the center of the penalty area, the Egyptian star had a dangerous header from a sharp cross but sent the chance directly at Courtois.

Real Madrid appeared to take the lead in the 43rd minute when a scramble in front of goal ended with Benzema sending the ball into the back of net.

After Benzema was played in on goal by a long cross, the French international played the ball back across goal.

The ensuing deflections ended back at Benzema’s feet as he appeared to score. But a lengthy VAR review determined that the forward was offside prior to the deflections from Liverpool’s defenders.

But Real Madrid would be the first to strike in the 59th minute courtesy of Vinícius. The Brazilian winger perfectly timed a back-post run behind Trent Alexander-Arnold and latched onto a low cross from Federico Valverde for the 1–0 lead.

The goal led to a raucous response at the Real Madrid watch party in the Santiago Bernabéu.

Salah came close to equalizing in the 64th minute, but Liverpool was thwarted once again by Courtois as the Egyptian’s curling shot was parried wide.

Just moments later, Courtois cut short another Salah chance after a deflected pass lobbed to Salah at the back post.

Liverpool continued to furiously attack after conceding, adding to its tally of 20 shots to Real Madrid’s three. In the 80th minute, Salah’s shot was deflected by second-half substitute Diogo Jota, but the chance was pushed out for a corner by Courtois.

In the 82nd minute, Courtois came up with another incredible reaction save on yet another Salah chance.

The Premier League Golden Boot winner had an opportune chance at goal, cutting past his defender and sending a shot goal-bound until Courtois’s arm glanced the shot and directed it wide.

In the end, Liverpool’s hopes for a three-trophy haul were ended less than a week after a series of late goals from Man City saw Liverpool miss out on a Premier League title.