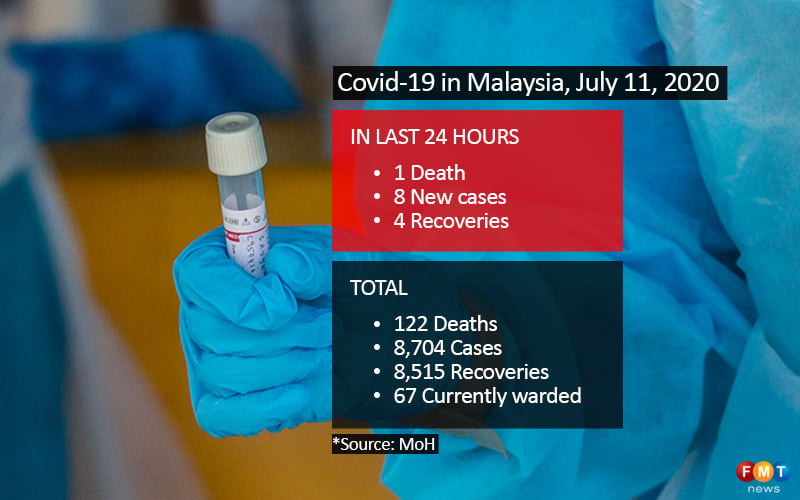 PUTRAJAYA: The health ministry today announced eight new Covid-19 cases, with one death, raising the total number of deaths to 122.

This brings the infection tally to 8,704, with 67 active cases still receiving treatment as of noon today.

Out of the eight new cases, four were imported cases. Two infections were within Malaysians, with one in Sabah and the other in Sarawak, and the remaining two recorded within foreigners. The two foreigners were from the Sepang detention depot.

Three patients are in the intensive care unit (ICU), with two more in need of respiratory assistance.

Noor Hisham said the patient who died was a 72-year-old Malaysian who had high blood pressure and was also suffering from diabetes.

“He had sought traditional treatment several times from July 3 before being admitted to a private hospital on July 9,” he said.

“He was then shifted to Sarawak General Hospital after he was suspected of being infected with the virus,” he said.

The patient was admitted to ICU after he was tested positive for Covid-19.

Noor Hisham said government hospitals take samples before carrying out any surgery so that precautions can be taken before the surgery.

Ferdinand on Barca breeding: Bad. They still rely on old-timers
Inter wants Perisic back, even if Conte remains in the team. Bayern hopes to buy the player for less than 20 million euros
Rudi Garcia on Lyon's chances against city: the quarter-Finals showed that the favourites can also be beaten
CSKA agreed a 5-year contract with Fuchs. The transfer is estimated at 7-10 million euros
Ferdinand on Messi at Barca: Will he want to stay, given the results and the team's performance? Does he have time to wait?
I would not be surprised if Pochettino is appointed in less than 3 days. Ex-Barca winger Carrasco on the club's new coach
Alaba about Mueller: we are Glad that Bayern have such a player
Source https://www.freemalaysiatoday.com/category/nation/2020/07/11/8-new-covid-19-cases-with-1-death-reported/

Two obscure genre nuggets you might want to check out

How bad is the retrenchment situation in Singapore, and how much worse it will get?

Anglican churches in Sarawak to resume services on Aug 16

Philippine security forces on ‘alert’ for reprisals after militant held

China ramps up US oil purchases ahead of trade deal review, say sources

Iran hails UN arms vote, saying US has ‘never been so isolated’

Dr Noor Hisham: Malaysia is against any form of organ trafficking

Muhyiddin has audience with Johor sultan at Istana Bukit Serene

California encouraged by trends even as it passes 600,000 coronavirus cases, most in US

In lawsuit, ‘Fortnite’ maker to test idea of iPhone as market unto itself

Australia commemorates end of WW2 with message of unity

Israel-UAE deal a Trump coup, but his sights are set on Iran

Ringgit likely to trade between 4.16-4.23 against US dollar next week

Bursa Malaysia to stay in consolidation mode next week

Europa League no longer a consolation prize for European giants

Miami's Jones stretchered off in NBA loss to Pacers

Why was Fortnite kicked out from Apple App Store and Google Play Store? (VIDEO)

No fiesta in Spain as public drinking banned, clubs closed due to coronavirus surge