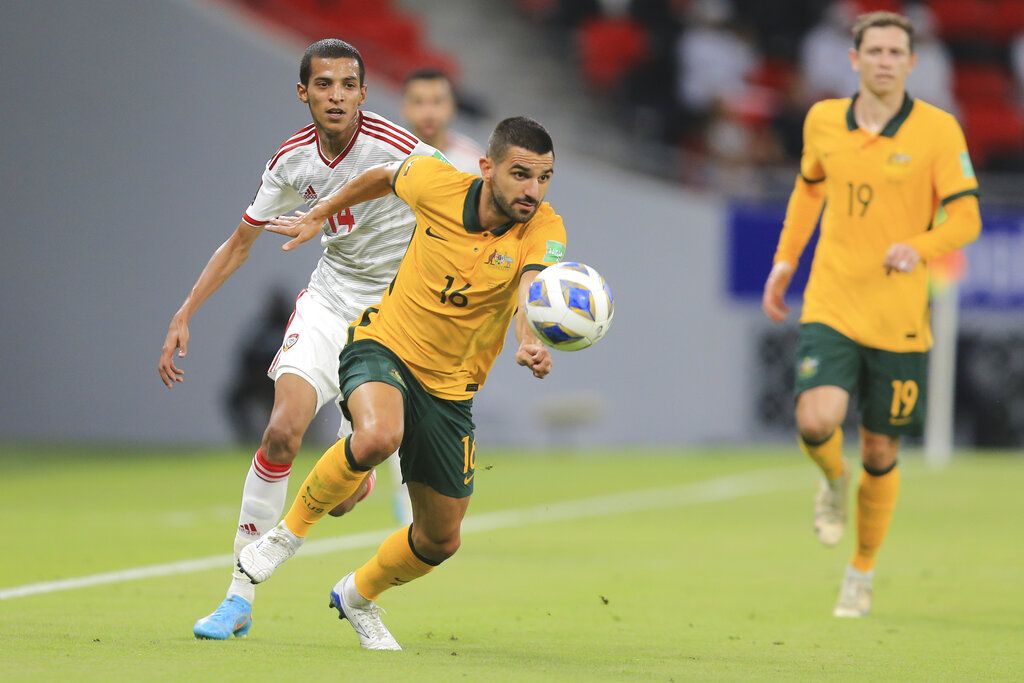 Australia’s Aziz Behich beats Abdulla Hamad of the UAE to the ball in Al-Rayyan. (AP pic)

AL-RAYYAN: Ajdin Hrustic fired a late winner to see Australia to a nerve-wracking 2-1 victory over the UAE today and into a last showdown for a place in this year’s World Cup in Qatar.

Eintracht Frankfurt midfielder Hrustic’s deflected volley in the 84th minute decided the feverish Asian zone clash in the Ahmad bin Ali Stadium that will host seven games in the World Cup in November.

More than 4,000 Emirates fans made up more than half the crowd in the 40,000 capacity stadium in the Doha suburbs where the players were blasted with air conditioning to keep the evening temperatures down.

Australia, who will take on Peru in the same stadium on June 13 in their quest to qualify for a fifth straight finals, struggled to gain the upper hand and coach Graham Arnold said he expected more from his players in the next fixture.

“I am 50% happy with the team. I think there is still a lot of improvement to come,” Arnold said.

The coach, who said before the game that “Aussie mental strength” would get them through, added when he challenges the players back in the dressing room on whether they could give more “all of them will agree”.

Nineteen-year-old forward Harib Al-Maazmi, who scored the winner in UAE’s surprising 1-0 win over South Korea that got them into this playoff, was a constant nuisance to the Australian defence in the first half.

After 18 minutes his left wing run took him to within 3m of goal but he could not get a shot away and was smothered by the Australian defence.

The Shabab Al Ahli winger beat the Australian defence again 10 minutes before the break but Socceroos goalkeeper Mathew Ryan somehow got an arm to his effort.

Four minutes into the second half, Al-Maazmi again forced Ryan into a low save before Jackson Irvine put Australia ahead.

Martin Boyle stole the ball on the right wing, took it into the penalty area and Irvine, who plays for German second-division side St Pauli, tapped in at the near post.

Australia barely had time to savour their goal when Al-Maazmi again found space.

His cross broke to Caio Canedo, a Brazilian who first got an East Timor passport and then qualified for the UAE in 2020, who blasted home from close range.

The game seemed headed for extra-time when Hrustic met the ball from a corner that was only half cleared and his left-footed strike took a big deflection to find the net.

UAE had been looking to qualify for the World Cup for only the second time since their debut in 1990.

Their Argentine coach, Rodolfo Arruabarrena, said the UAE players “lacked the stamina in the last 15 minutes” to keep up their fight.

New Zealand will take on Costa Rica in Doha on June 14 to decide the final qualifier for the tournament that starts Nov 21.