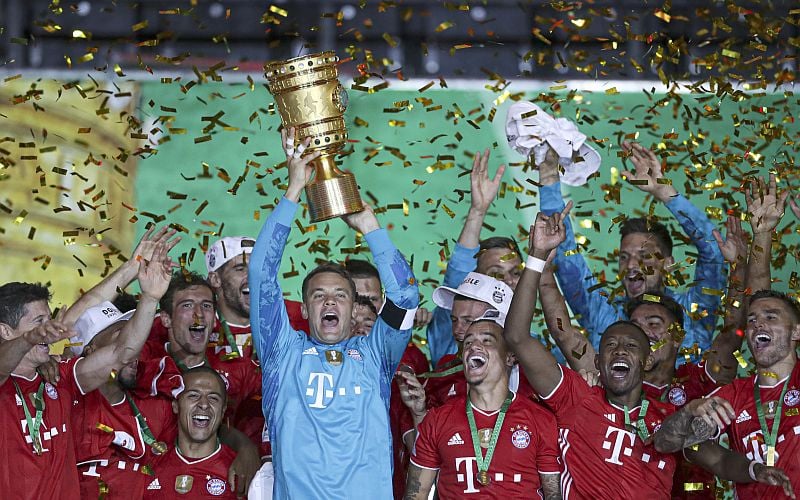 Bayern Munich players celebrate after winning the trophy in the match against Leverkusen in Berlin on Saturday. (AP pic)

BERLIN: Bundesliga champions Bayern Munich kept their hopes of a treble alive after a dominant 4-2 win over Bayer Leverkusen to lift the German Cup for a record-extending 20th time at the Olympiastadion on Saturday.

Bayern sealed their 13th domestic double as Hansi Flick, who took over as interim boss when they sacked Niko Kovac in November, repaid the Bavarian club’s faith in him by winning his first final as permanent manager.

Flick also became the first German to win the country’s league and cup double as a player and manager.

David Alaba gave Bayern the lead with a free kick in the 16th minute after Robert Lewandowski was fouled at the edge of the box, with the defender’s effort sailing over the wall and beating the outstretched arm of Lukas Hradecky in goal.

Bayern doubled the lead when Joshua Kimmich released Serge Gnabry down the right channel and the winger’s uncontested shot nestled into the bottom corner for the 24-year-old’s 20th goal of the season in all competitions.

Lewandowski then pounced on Manuel Neuer’s long ball and let fly a thunderous strike from range at Hradecky and the Finnish goalkeeper fumbled, allowing the ball to creep over the line to give the Polish striker his 50th goal of the season.

Leverkusen opened their account when Sven Bender headed home at the far post from a corner kick but it was too little, too late as Lewandowski grabbed a second with a chip over the keeper in the 89th minute from Ivan Perisic’s cutback.

There was late drama when VAR spotted a handball in the box in stoppage time to award Leverkusen a penalty. Kai Havertz’s consolation strike into the top corner proved to be the final kick of the game as Bayern defended their title.

Bayern have now won 17 games in a row in all competitions and are also unbeaten in their last 26 games stretching back to December. They lead Chelsea 3-0 on aggregate in the Champions League last-16, with the second leg to be played next month.

Leverkusen, who missed out on Champions League qualification after finishing fifth in the Bundesliga, can still qualify for Europe’s elite competition if they win the Europa League where they lead Rangers 3-1 on aggregate in the last-16.

City are ready to give Coulibaly a 5-year contract with a salary of 10 million euros. Napoli wants 80 million for him^. Manchester City are working on the transfer of defender Kalidou Coulibaly from Napoli
PSG have a lot of injuries before the Champions League (even Tuchel!). Kerer broke his ear, but Mbappe is recovering furiously
Manchester City can join the fight for Tiago. Liverpool are still Interested in the player
Fomin about career abroad: I don't plan so: in 20 — FNL, in 22 — RPL, in 24 — Europe. I move step by step
Mendes suggested Manchester United's Fati as an alternative to Sancho. Barcelona will not sell the midfielder and will extend his contract
Sevilla goalkeeper bunu about the 11-meter shot: he Coached a penalty with Ocampos. He is hitting the same way as Jimenez
Coach Porto conceição can change Conte at the head of Inter
Source https://www.freemalaysiatoday.com/category/sports/2020/07/05/bayern-thrash-leverkusen-to-win-20th-german-cup-title/

Apple must pay US$500m over patent violations, US court rules

Fifa, AFC postpone World Cup qualifiers to next year due to Covid-19

42 new Covid-19 infections in Singapore, including 11 imported cases and one in the community

Fired up by HK activists, Thailand’s youth take on the establishment

182 arrested under RMCO, including for karaoke activities

Bolsonaro denies Amazon rainforest is on fire despite govt data

Political environment muddied with so many coalitions — Jamari Mohtar

Ismail Sabri: 182 nabbed for RMCO violations including 17 for not wearing masks

‘We must fight’: Thailand’s youth take on the establishment

S. Korea, US scale down military drills due to coronavirus