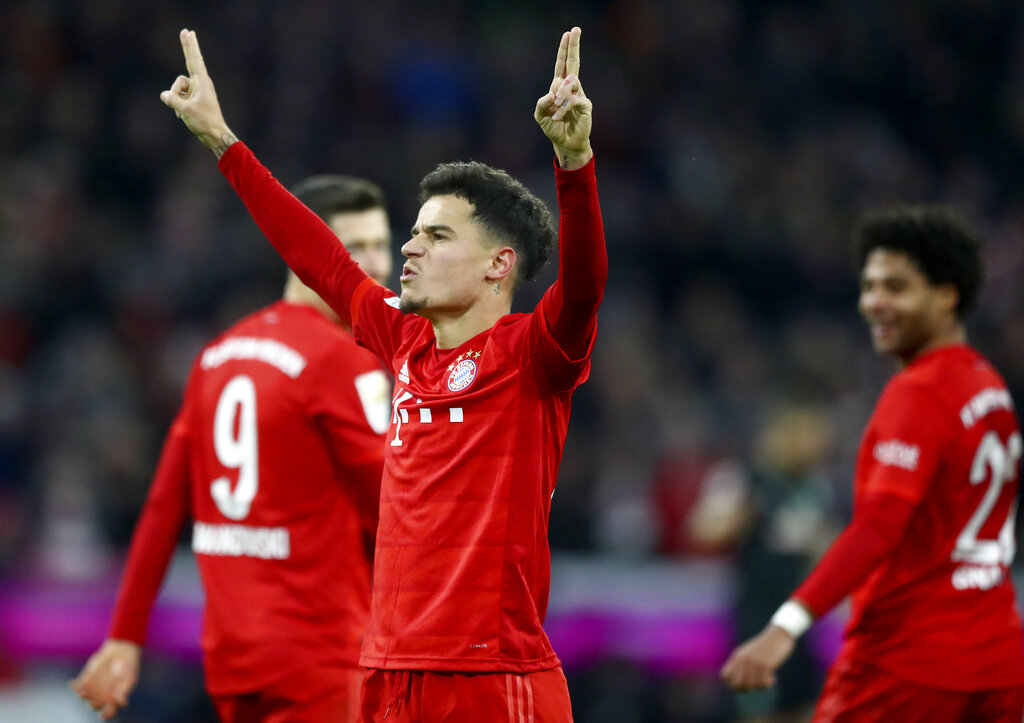 Coutinho has 8 goals and 6 assists to his name this season. (AP pic)

The option expired and “we haven’t activated it”, said Rummenigge.

“Now we’re going to draw up squad planning internally (for next season) and we’ll see if he still has a role to play with us or not.”

Coutinho joined Bayern last August but has failed to shine on a consistent basis.

He featured in 23 of 25 league games before the season was halted in March due to the coronavirus but started just 15 times.

Coutinho, who has eight goals and six assists to his name, sat out last weekend’s resumption of the season having undergone ankle surgery in April.

Rummenigge also said there will be a tightening of belts in the transfer market once the crisis had passed.

So much so that paying a club record fee for a player would not be an option.

Kike Setien: the five-substitution Rule will hurt Barcelona
Riyad Marez: Now is the time for Manchester City to win the Champions League. We have everything for this
Havertz became The Bundesliga's all-time leading under-21 goalscorer
Crvena Zvezda became the champion of Serbia for the third time in a row
PSG will buy Icardi from Inter for 50+7 million euros. The clubs have agreed
Inter Milan are Interested in forward of Hertha Cunha. Transfers of Cavani and Vidal are no longer a priority
Havertz has 7 goals in his last 6 matches
Source https://www.freemalaysiatoday.com/category/sports/2020/05/23/bayern-wont-be-activating-e120-mil-option-for-coutinho/

No need to wear face mask while jogging, driving alone

La Liga to restart on June 11, kicking off with Sevilla vs Real Betis

‘Sonic the Hedgehog’ sequel already in the works

Besides ‘home and away’ venues, neutral sites lined up for EPL matches

Uefa to fast-track competitions in one venue, says Getafe president

Dortmund’s Haaland to miss Paderborn game, Dahoud out for the season

Japan to restart football without spectators on July 4

The return of Serie A: What’s at stake

We thought too big, Renault says as it axes 15,000 jobs in cost-cutting reboot

Uggah: Dog that bit Sarawak boy, 5, confirmed to have rabies

Brazil GDP contracts 1.5pc in Q1 due to pandemic

Covid-19: Still too early to decide whether to lift CMCO, says Noor Hisham

China accuses US of taking UN hostage over Hong Kong

‘Wild Rift’: See the first official gameplay for ‘League of Legends’ on mobile and console

Ringgit higher against US dollar on improved global sentiment

Report: Britain pushing US to form 5G club to cut out Huawei

Hamzah: Dr Mahathir told me to find a way for Bersatu to leave Pakatan, erode confidence in DAP