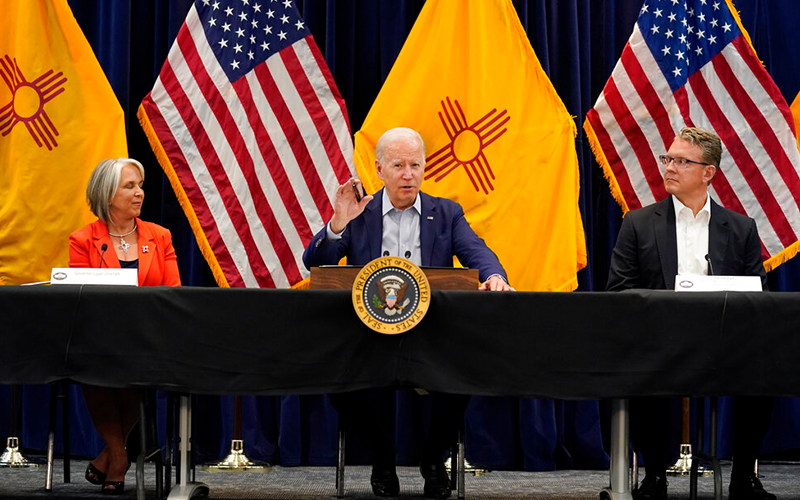 President Joe Biden (centre) speaks during a briefing on the New Mexico wildfires in Santa Fe on Saturday. (AP pic)

SANTA FE: The US government will fund New Mexico’s full wildfire response, President Joe Biden said on Saturday, speaking from Santa Fe amid anger from survivors over the blaze that was started by federal officials.

“We have a responsibility to help the state recover,” Biden told elected officials and emergency responders at an afternoon briefing in New Mexico’s capital, where he was reviewing efforts to fight the Southwestern state’s biggest blaze in recorded history.

“Today I’m announcing the federal government’s covering 100% of the cost,” the president said, though earlier in the day he had said he would need congressional approval for some funding.

“We will be here for you in response and recovery as long as it takes,” he said, adding that he saw an “astounding” amount of the perimeter of the territory that had burned while flying to Santa Fe.

A senior administration official, speaking on condition of anonymity, said Biden’s pledge was to authorise 100% funding over the next 90 days for debris removal and emergency protective measures.

Biden told staff at an emergency operations centre shortly before he was expected to meet families who had lost homes that he would support any congressional bill to allow people to completely rebuild.

Driven by drought and wind, the fire has destroyed hundreds of homes in mountains northeast of Santa Fe since two prescribed burns by the US Forest Service (USFS) went out of control in April.

Air Force One banked and circled around fire damage in New Mexico, allowing Biden to see burned forest and plumes of smoke from the sky before he landed and greeted Governor Michelle Lujan Grisham and other elected officials who have called for more financial support from the federal government.

Local officials told Biden that they did not have sufficient resources to predict the weather or assist affected residents.

“Our citizens are tired, angry, and afraid of the future they are facing,” said David Dye, New Mexico secretary of the Department of Homeland Security and Emergency Management.

The fire forced thousands of residents to evacuate Indo-Hispano farming villages with twice the national poverty rate. The blaze has upended these fragile economies where residents cut firewood and raise hay to get by.

“This is not a natural disaster, this was man-made by a government entity,” said Ella Arellano, whose family lost hundreds of acres of forest around the village of Holman. “It’s a mess, just a big mess that will take generations to recover from.”

With over 320,000 acres of mountains blackened by the Hermits Peak Calf Canyon Fire – an area about the size of Los Angeles – communities are preparing for mudslides, ash flows and flooding in areas where extreme fire gave forest floors the water absorbency equivalent to asphalt.

So far the Federal Emergency Management Agency (Fema) has given over US$3 million to more than 900 households.

But maximum Fema payouts of around US$40,000 for destroyed houses are in some cases not enough to cover the loss of farm equipment that burned alongside homes, which at one house was likely worth hundreds of thousands of dollars.

The blaze is burning along with another in southwestern New Mexico that is the second largest in state history, underlining concerns that climate change is intensifying fires that overwhelm firefighters and threaten to eventually destroy most forests in the US Southwest.

Investigators found that a Forest Service controlled burn jumped out of bounds on April 6 to start the Hermits Peak Fire. The Calf Canyon Fire was caused by a USFS burn pile of logs and branches on April 19. The two fires merged on April 22.

To prevent fires from spreading, land managers sometimes use controlled burns to reduce small trees, shrubs and other materials that fuel wildfires.

The Forest Service has since called for a temporary nationwide halt to the practice while it reviews procedures.