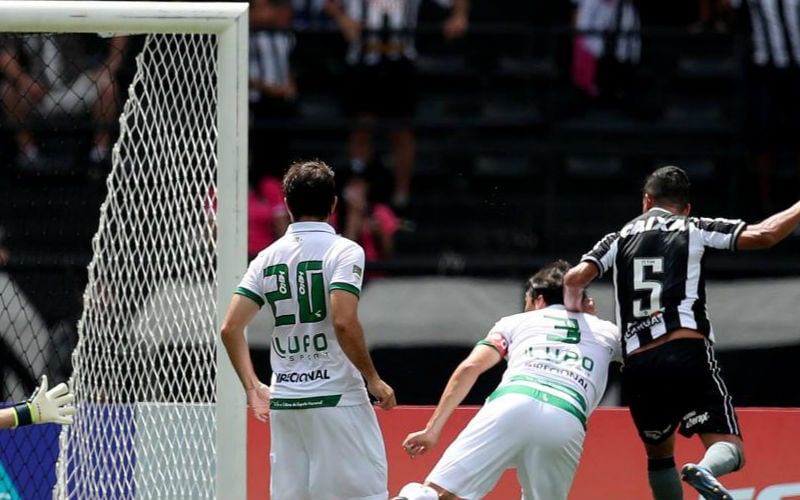 RIO DE JANEIRO: A first-half header from Rodrigo Lindoso was enough to snap a three-game winless run for Botafogo on Sunday and give the Rio de Janeiro side a 1-0 win over América-MG.

The home team took the lead midway through the first half when Lindoso got on the end of a front post cross from Marcinho to glance a header past goalkeeper João Ricardo.

Luan was sent off for the visitors a few minutes from time after a heated discussion with Gilson, one of Botafogo’s substitutes, who was also sent to the stands.

The win, Botafogo’s first league victory since August 25, lifted them into 13th spot in the 20-team Série A, just one point behind América-MG who are two places above them.

Napoli will extend the contract with Gattuso until 2023
Henri knelt for more than 8 minutes in the first match in charge of Montreal, honoring the memory of George Floyd
Kalu moved from Herta to Botafogo
Goalie of the banner of Labor, who was hit by lightning: everything is good at the moment. Back soon
Ole Gunnar Solskjaer: I Think it was a penalty against Aston Villa
Philadelphia played in t-shirts with the names of black people who died at the hands of the police
Kompany tries everything at Anderlecht: he coached without a license (terrible), played 15 matches and invested 3 million euros in the club
Source https://www.freemalaysiatoday.com/category/sports/2018/09/17/botafogo-snap-three-game-winless-run-with-1-0-win/

In show of commitment, US signs ‘strategic vision’ pact with Thailand

Covid-19: Nepal’s envoy thanks Malaysian govt for treatment, recovery of its migrant workers

With one year to go, experts warn of high-risk Tokyo Olympics amid pandemic

US approves sale of 105 F-35 stealth fighters to Japan

Hong Kong to suspend schools after spike in virus cases

Income inequality in Malaysia widened even while median household income rose to RM5,873 in 2019, according to latest statistics

Klang man transforms living room into Milo gallery with over 1,000 items, including mug from 1950s

Hundreds to gather on Malaysia’s beaches, here’s why

Australia to halve numbers of returning citizens as virus surges

N. Korea says US summit unlikely but a surprise ‘may still happen’

Birthday wishes from friends and foe as Mahathir turns 95

‘Get a noose’: FBI probes US lynching attempt on BLM organiser

Ousted US prosecutor says Barr pressed him to resign

US sets highest daily increase with more than 60,500 Covid-19 cases

Sexual harassment in the workplace: More than 30 Malaysian civil societies call for zero tolerance in wake of allegations against IRF activist

Remodelling your home? These apps can help

Tokyo stocks open lower on falls in US indices

Rio de Janeiro will reopen beaches when there is a Covid-19 vaccine, says mayor

US approves US$620 mil missile upgrade package for Taiwan