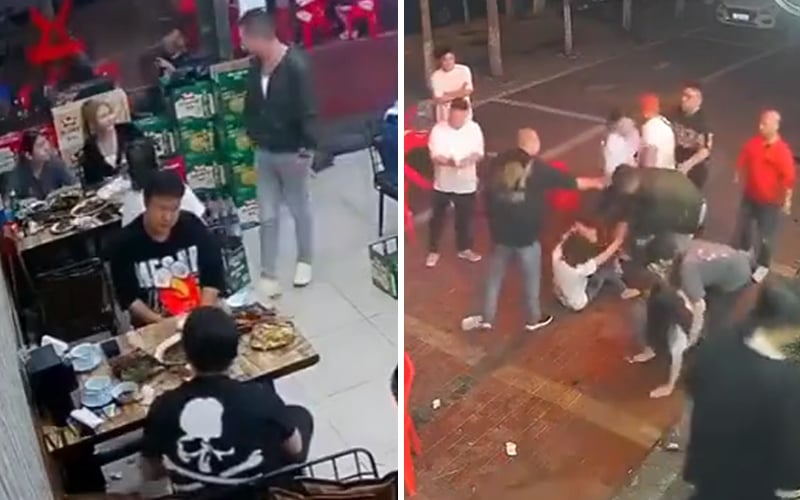 Footage circulated online shows a man striking a woman before others drag her outside. (Twitter pic/Badiucao)

BEIJING: Eight people have been arrested for a vicious attack on a group of women at a restaurant in China, police said Saturday, in a case that has sparked outrage over predatory sexual behaviour.

Footage of the incident widely circulated online shows a man placing his hand on a woman’s back as she shares a meal with two companions at a barbecue restaurant in northern China’s Hebei province.

After the woman pushes him away, the man strikes her before others drag her outside and deal a barrage of blows as she lies on the ground. Another woman is also knocked to the floor.

The video renewed an online debate about sexual harassment and gender-based violence in China where the conversation around women’s rights has grown in recent years despite pressure from a patriarchal society, internet censorship and patchy legal support.

Web censors blocked keywords linked to the #MeToo movement after a wave of women accused university professors of sexual harassment in 2018.

Police in Tangshan city on Saturday said they had arrested eight people on suspicion of violent assault and “provoking trouble”, while a search for one other suspect was ongoing.

Two women treated at hospital following the incident were “in stable conditions and not in mortal danger”, while two others sustained minor injuries, authorities said Friday.

“How is this sort of thing still happening in 2022?” wrote another. “Please give them criminal sentences, and don’t let any of them get away.”

Last year, a Chinese man was sentenced to death for murdering his ex-wife as she live-streamed on social media, in a case that shocked the nation.