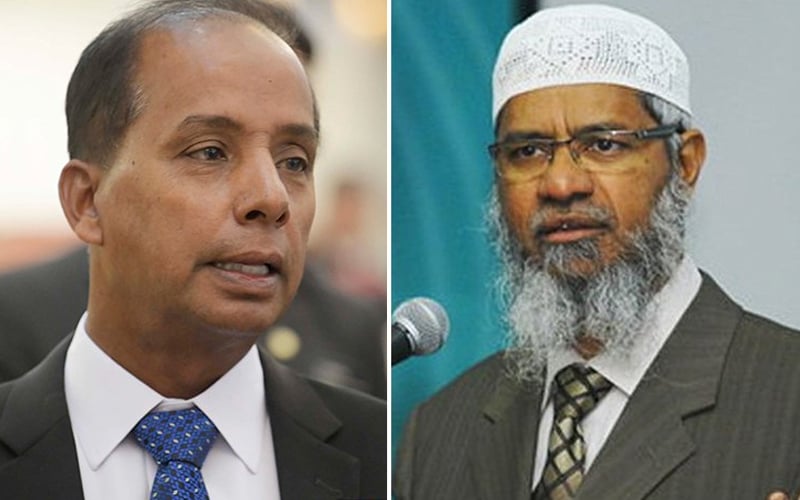 Kula, who is the party’s national vice-chairman, had sought in June for Naik to deposit RM100,000 with his lawyer or the court as security for costs.

Such an application is made when the plaintiff resides abroad. The defendant would request security for costs, where the money would be paid should the court dismiss the suit.

“He is ordinarily a resident and domiciled by virtue of him being a permanent resident,” the judge said.

Naik, who was represented by Sulaiman Abdullah and Akberdin Abdul Kader, was also awarded RM5,000 in costs.

Sulaiman submitted that the application was oppressive and aimed at discouraging Naik from continuing with his action.

Case management was fixed on Sept 4.

K Shanmuga, who represented Kula, said he would obtain instructions from his client on whether to appeal against the decision.

Naik, who is demanding compensation and exemplary damages, accused the defendants of ridiculing him and depicting him in a bad light and as a threat to the country’s security.

He also described himself as a renowned preacher and orator on comparative religion, saying he had received numerous awards including the Tokoh Maal Hijrah International Personality Award in 2013.

Naik previously lodged a police report in Shah Alam against Kula, Ramasamy, Santiago, Satees and former ambassador Dennis Ignatius, claiming they had made defamatory statements against him.

This followed reports in which Naik was said to have claimed that Malaysians of Indian origin were more loyal to the Narendra Modi government than to Prime Minister Dr Mahathir Mohamad, while Chinese Malaysians were “old guests” who should go back to their ancestral land.

Lewandowski scored for Schalke in their 10th Bundesliga game in a row. This is a League record
Gnabry scored the fastest goal in 18 years in the opening match of the Bundesliga
Manchester United have agreed a 5-year contract with Telles. It remains to be agreed with Porto
Sane made his debut for Bayern
Ronaldo posted a photo with the award for the best scorer from IFFHS: Happy to win 🇵 🇹 🇮 🇹 😀 💪 🏼
Godin will terminate his contract with Inter and move to Cagliari (Fabrizio Romano)
Wolverhampton made red and green uniforms to make the 12 Portuguese players at the club feel good. New level of care 🔴 🟢
Source https://www.freemalaysiatoday.com/category/nation/2020/08/14/court-throws-out-kulas-demand-for-security-for-costs-from-zakir-naik/

US House to consider bills on Chinese goods made with forced labour, says Pelosi

Germany to take on debt again in 2021 in virus fightback

Bale arrives in UK ahead of Tottenham move

Arteta says he had fears Aubameyang would leave Arsenal

Road bully arrested after harassing cop who made U-turn

Only Messi knows if he’s coming to City, says Guardiola

Find a way for Covid-19 patients to vote, says Azalina

Most Singaporeans too reliant on cleaners, unwilling to pick up trash from the ground, study shows

US to ban TikTok, WeChat downloads from Sunday

Swab tests on Kedah MB and 55 others

Anifah says Shafie off the mark about Philippines issue

JKR confirms officer with Covid-19 was at Senate meeting

S’porean admits supplying luxury goods to N. Korea worth US$200,000

Trump to block US downloads of TikTok, WeChat on Sunday, say officials

Colourless, odourless, tasteless: Why carbon monoxide can kill you even before you know what’s happening

No official announcement on permission to perform umrah, says minister

After Petronas settles Sarawak’s SST, Shafie says Sabah’s tax must be paid too

Nerve agent on Navalny’s water bottle could have been evidence, but was removed

SDMC: All entering Sarawak through Sabah or Labuan to use EnterSarawak app, undergo Covid-19 tests three days before travel date

Sarawak’s first international school to be operational by 2023, says minister