A collection of master tapes of performances from the 1969 Woodstock festival is seen in an undated handout photo ahead of an auction to be held November 28, 2020, in Los Angeles, California. — GWS Auctions handout pic via Reuters
LOS ANGELES, Nov 12 — A gold and diamond “TCB” ring worn by Elvis Presley is expected to fetch more than US$500,000 (RM2.1 million) at a memorabilia auction in Los Angeles that ranges from rock guitars to a set of master tapes from the Woodstock festival.

The Elvis Presley ring is described as the first in a series of rings with the TCB (Taking Care of Business) letters and lightning bolt motif that the singer adopted as his mantra in 1969 when he returned to performing concerts after focusing on movies.

“It’s the quintessential Elvis jewellery piece,” said Brigitte Kruse, founder of GWS Auctions. Kruse said she thought the ring could fetch anything between US$500,000 and US$1 million at the 300-item auction on November 28. 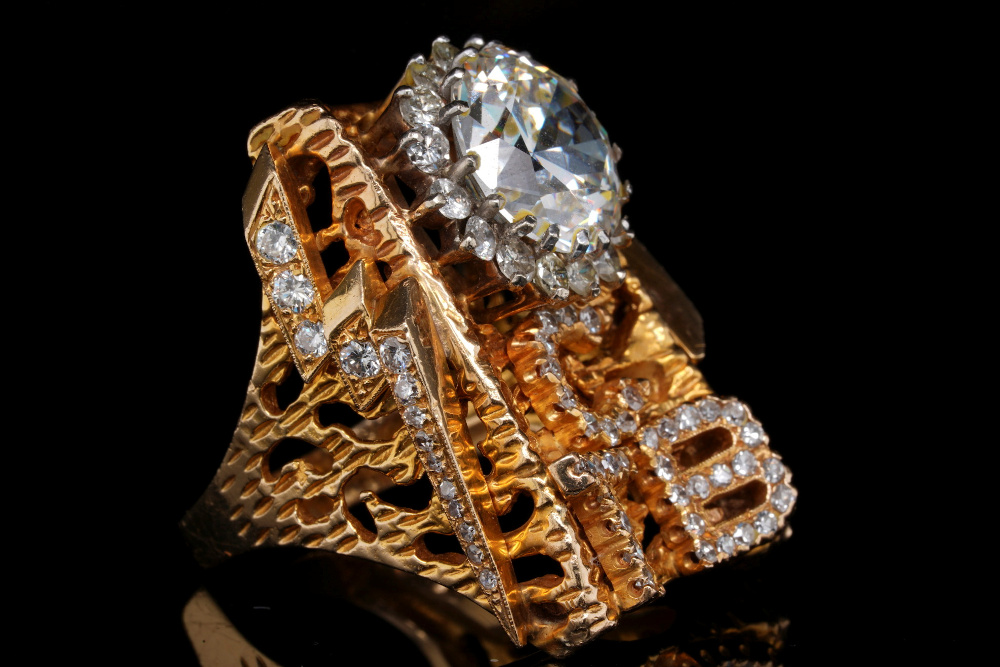 A gold and diamond TCB (Taking Care of Business) ring worn by the late Elvis Presley is seen in an undated handout photo ahead of an auction to be held November 28, 2020, in Los Angeles, California. — GWS Auctions handout pic via Reuters
Presley gave the ring, which has a total 2.25 carats of diamonds and which he designed himself, to his opening band singer J.D. Sumner in 1975.

The most expensive lot could be a collection of master tapes from the 1969 Woodstock festival that sat in a producer’s storage locker for more than 10 years and have never been available for sale before.

The 700 plus hours of tapes, independently valued at US$1.6 million, include performances by Jimi Hendrix, Janis Joplin, The Who and dozens more artists who took part in what is seen as a cornerstone of hippie culture.

Kruse said it was difficult to estimate how much the Woodstock tapes might sell for. “There’s just nothing to compare it to,” she said. “Every now and then we bump into those pieces that are truly exceptional and things you wouldn’t even think still existed.” — Reuters  pic

Investing in solar energy, healthy food, and Weddings: A guide to Levandowski's immense business empire
Paul Scholes: Tiago doesn't look like a player fit for Klopp. He would be more suitable for Manchester United
Salah may be called up to the Egyptian national team to participate in the Olympics
Fosu-Mensah tore up the crosses and was out for a few months. Manchester United sold him to Bayer Leverkusen in January
Antonio Cassano: Does Conte understand that he is not Guardiola? Inter were just ridiculous in the Champions League
Juve will win again if Ronaldo is not in the starting line-up. They need a quality centre-forward, they don't grow as a team. Ventola about Cristiano
The head of the LGBT group of City fans: Burst into tears after scoring a goal in the match for the exit to the Premier League. I felt that after so many years of longing, we are rising

Putrajaya to lift MCO for KL, Selangor, Johor and Penang

MetMalaysia: Open burning during hot weather cause of local haze

Another twist in Sabah as Hassan submits an SD

Iraq receives first Covid vaccines as a gift from China

Australia releases dozens of refugees after years of detention

GPs, dentists must be first in line for vaccines, MMA tells govt

Former construction worker is richest man in China and Asia

Govt fails to transfer challenge against Emergency to KL

Twitter to boot users who persist with Covid-19 lies

China aims to vaccinate 40% of population by end July

Company director charged with cheating lawyer out of RM9m in 2014

No rift in PAS, and no plot to topple Hadi, says Khairuddin

Mida: Nearly RM70b more potential investments in pipeline for this year and next

Warisan rubbishes Hassan’s claim he was forced to swear allegiance

If deputy minister wants to be in NZ, let him but find another in Malaysia to work, PKR MP tells PM

‘The next national sprinter!’ Social media users amused by boy’s speedy escape on his first day of school (VIDEO)

Mida: Manufacturing sector leads investments within country in 2020 with RM91.3b

Top 4 finish would be a dream for Everton, says Ancelotti

US readies sanctions on Russia over Navalny poisoning