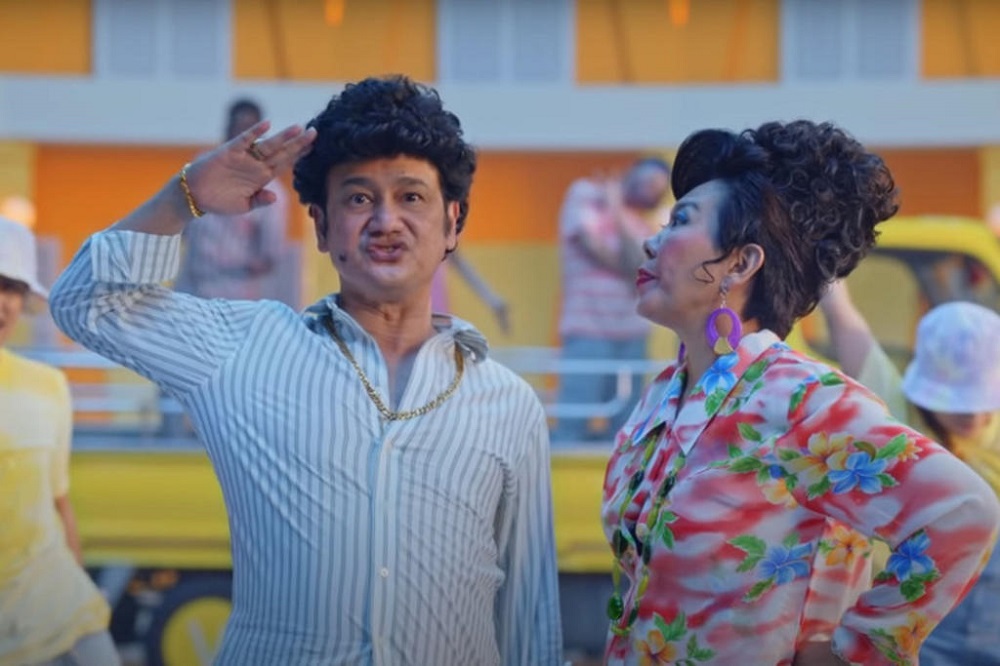 This time, the unlikely public health ambassador’s latest song in support of the vaccination campaign has been making waves overseas despite his heavy use of Singlish phrases, earning him mentions on news outlets in Australia and the United Kingdom.

In a YouTube music video on the Government’s gov.sg channel that has garnered nearly 35,000 views as of Tuesday evening after its release on Sunday, Phua — played by comedian Gurmit Singh — advises the public not to be complacent and to “faster go and vaccinate”.

He convinces his wife Rosie — played by actress Irene Ang — to get her shot, dishing out facts about Covid-19 vaccines in between flashy dance moves and catchy lyrics.

“Chronic illnesses, mild allergies, all these can take, there you see. If not sure, relax, don’t panic. Ask your doctor at the clinic,” Phua advises in the two-minute pop song entitled Get Your Shot, Steady Pom Pi Pi. The latter phrase broadly means to “stay calm”.

“It’s safe for most, including elderly, because the Government got check properly,” he adds.

The music video was featured in a news article by Australia’s ABC News on Tuesday, as well as a report in British daily The Guardian which described the song as giving “surprisingly detailed medical advice” in the form of “informative disco”.

So far, the video has been met with amusement and largely received positively online, while also sparking comment about the Singlish expressions used.

One Twitter user based in Toronto, Canada, wrote: “Great. Now I want to get my shot in Singapore.”

At home, however, the video seems to have split opinions, with some questioning the release of a comedic video amid a recent uptick in community cases, from 10 cases in the week before to 60 cases in the past week.

“Ngl (Not gonna lie), wrong timing,” one user wrote on YouTube. Another commented: “Why y’all upload this now when the cases are going up?”

Others cheered at seeing their favourite contractor bringing smiles amid difficult times.

Get vaccinated! Otherwise we will have to keep playing this video ad nauseum 🤣 https://t.co/yKuYHoXtXT

Phua Chu Kang Pte Ltd, the sitcom about an endearingly nouveau riche contractor and his family, ran from 1997 to 2007 on Channel 5, winning Best Comedy Programme at the Asian Television Awards for six consecutive years.

It also won Gurmit the award for Best Comedy Actor five times. In 2009, the series was resurrected by Malaysia’s NTV7 in the spin-off series, Phua Chu Kang Sdn Bhd.

Back in 2003 during the severe acute respiratory syndrome (Sars) outbreak, the eccentric contractor rapped about taking precautions and practising good hygiene in the famous Sar-Vivor rap song.

Since the Covid-19 pandemic, Gurmit has reprised his role for two other public service videos on the gov.sg channel — a song called Singapore Be Steady and a video where he speaks about how Singaporeans can protect themselves from the coronavirus.

Speaker of Parliament Tan Chuan-Jin, reacting to the buzz over Phua’s latest track, wrote on Twitter: “Get vaccinated! Otherwise we will have to keep playing this video ad nauseum” followed by a laughing emoji. — TODAY

Covid-19 proving to be a harsh lesson for all teachers

Malaysians in Guantanamo: Don’t use Covid-19 to delay trial, expert tells US

Situation at MAEPS ‘challenging’ due to high number of cases, say authorities

Myanmar anti-coup fighters retreat from town as US makes appeal

Cops must not become part of the problem

PM Muhyiddin calls on MoE to be nimble-footed, make sure no student is left behind in new normal

India confirms Covid-19 corpses among those dumped in Ganges river

Made in Malaysia: ‘Footy’, contactless-football in the new norm

Scores evacuated as fire breaks out at Philippines Covid hospital

Back to the future: Locking down again in Singapore

Benghazi bikers rev up to show another side of Libya

UK to treble tree planting by 2024 in climate change fight

30 sentenced to death over anti-police clashes in DR Congo

Sarawak to receive 500,000 doses of Sinovac vaccine in a week

Why parents must understand child psychology

Thousands in US call for end to Israeli ‘genocide’ on Palestinians

This is probably the clearest look at the Huawei P50

Palestinian cause needs support from all Muslim countries, says Hadi

Why it’s important to ‘talk money’ before marriage

All about the money honey: Australia, NZ clash over manuka label

CDC recommends US schools continue to use masks

Republic of Korea: 2 women send note of love to nurses

Registration for second round of AZ jabs to start soon

The terrific art of terrarium

OIC to be asked to help protect Palestinians

Youths to be included in shaping govt policies

On horseback and in helicopter, Bolsonaro rallies base

US pipeline hit by massive cyberattack fully back to ‘normal’

Malaysia’s ‘Father of physical education’ powers on at 95

Mammals can breathe through anus in emergencies, study shows

All Islamic nations should support the Palestinian cause, says Abdul Hadi

5 tips on how to choose the perfect retail lot