DIRIYAH, Saudi Arabia: Sliding behind the wheel of a sleek electric SUV, Reema Juffali is set to blaze a trail in male-dominated motor sports as the first Saudi woman to race in the kingdom.

Such adrenalin rushes were unimaginable for women in the ultra-conservative Islamic kingdom until June last year, when it overturned the world's only ban on female motorists as part of Crown Prince Mohammed bin Salman's wide-ranging liberalisation drive.

Juffali, a 27-year-old who made her motoring debut just months after the decades-old ban ended, will compete Friday and Saturday in the Jaguar I-PACE eTROPHY, an all-electric race in Diriyah, close to the capital Riyadh.

"The ban was lifted last year and I never expected to race professionally," said Juffali, sitting in her black-and-green Jaguar I-Pace, an electric sports utility vehicle.

"The fact that I am doing it... is amazing," Juffali, clad in a racing suit, told AFP in an interview close to the racing circuit in Diriyah.

Juffali, who hails from the western city of Jeddah and was educated in the United States, will participate as what organisers call a "VIP" guest driver, becoming the first Saudi woman to race on home soil. Saudi Arabia's first female race driver Reema al-Juffali adjusts her helmet in front of her car during an interview with AFP in Diriyah district in Riyadh on November 20, 2019, ahead of the international Jaguar I-PACE eTROPHY series for electric zero-emission cars set for the weekend. -photo by AFP

Prince Abdulaziz bin Turki al-Faisal, Saudi Arabia's sports authority chief, has touted it as a "watershed" moment for the kingdom.

"Reema will have thousands cheering her on, as a professional racing driver," the prince told AFP.

Juffali, who made one of her first appearances in competitive racing at the F4 British Championship at Brands Hatch in April, has only about a year of professional racing experience under her belt.

But she has had a passion for fast cars since her teenage years and grew up watching Formula One.

She passed her driving test after she moved to the United States to study some years ago, and is now one of only a handful of Saudi woman to have obtained a "racing licence" in her home country, a mandatory requirement to race professionally.

Even outside the Kingdom, only a few Saudi women have raced professionally.

"For a lot of women who haven't had the opportunity to learn how to drive, to get behind the wheel is definitely something scary," explained Juffali.

"For a lot of women in Saudi it's something so far away."

Juffali said her dream is to one day race at Le Mans -- a 24 hour competition in France that is one of the world's most prestigious and gruelling competitions.

In Riyadh she will be racing against the season's veterans but will not score any points. Saudi Arabia's first female race driver Reema al-Juffali adjusts her helmet inside her car during an interview with AFP in Diriyah district in Riyadh on November 20, 2019, ahead of the international Jaguar I-PACE eTROPHY series for electric zero-emission cars set for the weekend. --photo by AFP

Prince Mohammed has sought to shake off his country's ultra-conservative image by allowing greater freedoms for women, including easing so-called "guardianship" rules that give men arbitrary authority over female relatives.

But alongside reforms he has also overseen a sweeping crackdown on dissent.

Around a dozen women activists who long campaigned for the right to drive are on trial after being arrested last year, sparking widespread condemnation.

Some allege they were tortured and sexually harassed by interrogators; Saudi authorities deny the allegations.

The driving reform has been transformative for many Saudi women, freeing them from dependence on private chauffeurs or male relatives. 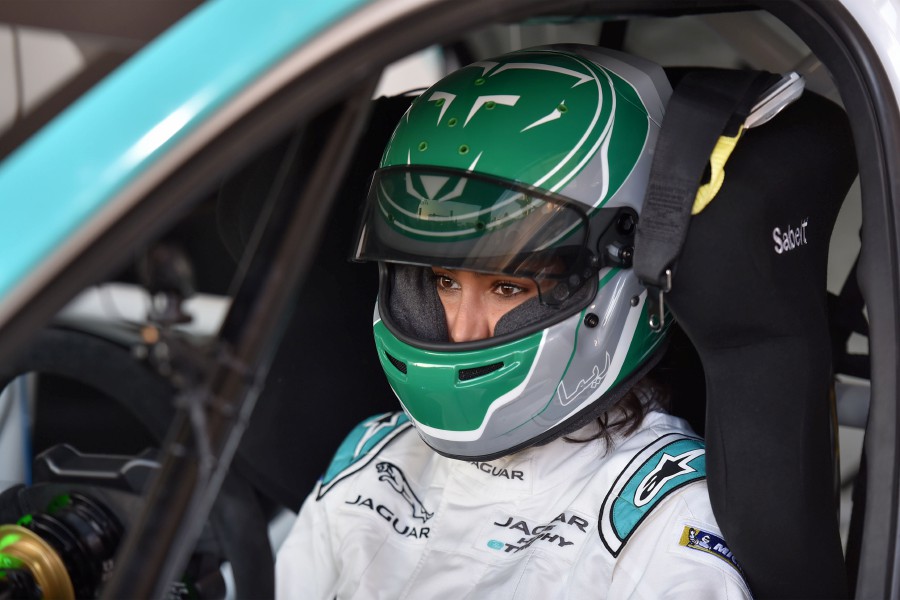 Saudi Arabia's first female race driver Reema al-Juffali is pictured inside her car during an interview with AFP in Diriyah district in Riyadh on November 20, 2019, ahead of the international Jaguar I-PACE eTROPHY series for electric zero-emission cars set for the weekend. --photo by AFP

Many are defying the perception that only dainty cars in bright colours are popular with women drivers.

Auto showrooms tapping women clients have rolled out a line-up of cherry red Mini Coopers, but sales professionals say many exhibit an appetite for muscle cars like the Chevrolet Camaro or the Mustang convertible.

Some women are taking up drifting -- oversteering the car to slip and skid or even spin, and other high-speed daredevilry -- which is illegal in public but tolerated in the controlled environment of some theme parks.

Clad in skinny jeans and Harley-Davidson T-shirts, some women are also training to ride motorbikes at a Riyadh driving school, a scene that is still a stunning a

nomaly in the conservative petro-state.

"Many (people) are surprised by all the changes happening in Saudi," said Juffali.

"Seeing me in a car, racing... For a lot of people it's a surprise, but I am happy to surprise people." -- AFP

Let's reflect on how we treat our elderly

The end is not nigh: It is up to you!

How to ensure no one is left out

Biden: US Democratic convention may be ‘virtual’ due to virus

Thumbs up for Health D-G’s creative shot and message

Morocco to free over 5,000 prisoners to slow virus spread

Man City says will not ask government to pay staff

Singer Pink has Covid-19, pledges US$1 mil to relief efforts

Prihatin aid a shot in the arm for Sabah farmers

Sabah urged to resolve vegetable dumping in Kundasang during MCO

Tech firms want RM250mil aid set aside for them

Good for all to wear masks, but frontliners come first, says expert

EUMCCI proposes steps to ensure businesses survive during and after MCO

Economist: Confidence in ringgit to return

No parties, no problem: Introverts happy with quarantine

No indication Covid-19 can spread through food, says Health D-G

Rooney slams pay-cut pressure on players, calling it a ‘disgrace’

Boatload of Rohingya arrive in Langkawi, held in detention

Ventilators from China expected to arrive in Malaysia tonight

Prisons Dept: All staff and inmates free of Covid-19

Those blacklisted, bankrupt can also apply for Prihatin aid

No going out to get your favourite food, says IGP

Starbucks competitor Luckin faked US$310 mil worth of sales

Health DG explains why no mass screening for Covid-19

Bankrupt, blacklisted individuals eligible for BPN can apply from tomorrow

Malaysia awaits WHO's guidelines on face mask use by the public

Covid-19 outbreak is fearful, but we’ll fight back yet! — Dr David Quek

From Covid-19 patient to plasma donor

Victim of drunk driver dies after 2 months in coma