Frida the rescued ‘pet’ tiger gets new home in Mexico 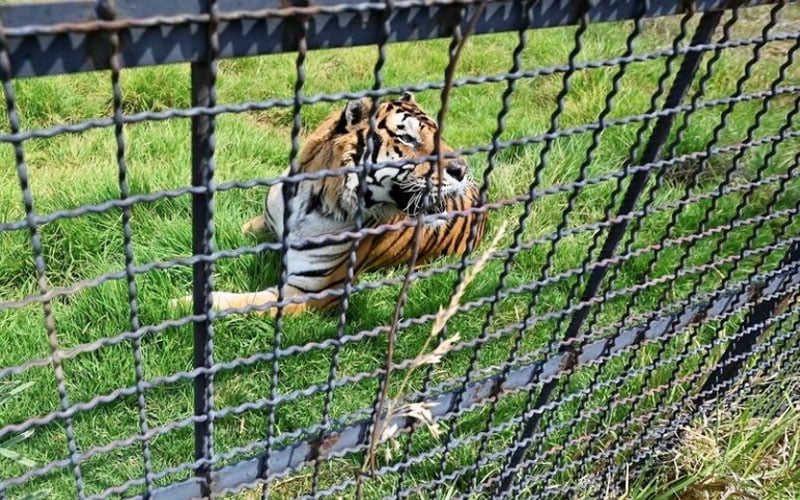 Frida the Bengal tiger is one of six rescued big cats at the Animal Kingdom park outside Mexico City. (AFP pic)

OTUMBA: As a tiny cub four years ago, Frida the Bengal tiger was found chained up in a restaurant parking lot in Mexico City, dirty, emaciated and unable to walk.

Rescued and rehabilitated, she is now a popular attraction at the Reino Animal (Animal Kingdom) park along with hundreds of other exotic creatures taken from misguided Mexican “pet” owners — including showy drug traffickers.

Far from the Asian forests where she belongs, Frida has made a full recovery and “no longer suffers,” said park employee Agustin Bastida as the tigress gave a big yawn.

Lying on a grassy patch she looked disinterestedly at the humans ogling her from the other side of a fence.

Frida is one of six big cats among 1,100 animals – 40% of them rescued exotic creatures – at the park in Otumba, northeast of the Mexican capital.

Fellow residents include zebras, giraffes, wolves and a variety of birds.

According to authorities, some 150 to 200 exotic animals are seized in Mexico City every year, often after reports from neighbors.

Some of the worst culprits are drug lords such as Joaquin “El Chapo” Guzman, who had a pet monkey called “Boots.”

In one major rescue in 2007, officials busting a “narco-mansion” found two jaguars, two tigers, two lions and a macaque, according to Lucio Garcia Gil, head of the PROFEPA environmental crimes office for Mexico City.

“There are many exotic birds, such as macaws or parrots, reptiles, many primates and big cats; it is what we have most detected that people have,” he told AFP.

Two big cats were rescued in the megacity in 2021 and four – including a lion cub – so far this year.

Mexican law allows people to legally purchase exotic animals from registered dealers “as long as they keep them safe and provide the appropriate protection,” he told AFP.

“Unfortunately… hardly anybody complies with the conditions,” he said.

Illegal possession is punishable by up to nine years in prison or a fine of up to US$15,000, though Gil said he could not remember anyone ever going to jail.

Keeping a big cat is expensive – they can eat as much as 30 kilograms of meat per day, and many private owners abandon the animals in the end.

Like lions or jaguars, Bengals – which grow to stand over a meter tall and can weigh as much as 260 kilograms – are not easy housemates and many have their fangs and claws removed so that they do not destroy their surroundings, or owners.

‘They are not pets’

According to the UN Environment Programme, global wildlife trafficking generates as much as US$23 billion per year.

It is the seventh-most lucrative illicit business, according to the Washington-based Global Financial Integrity.

In Mexico City, the lucky trafficked animals that do get rescued are taken to zoos and parks such as the 53-hectare Animal Kingdom northeast of the capital.

In Frida’s case, she was brought in with a broken hip, which has since completely healed.

“She could not walk, it was very sad, very sad,” said Bastida.

“People buy these animals to keep them as pets, but they are not pets,” he added.

“They have to be in the wild or in open spaces where the conditions are adequate for a good quality of life.”