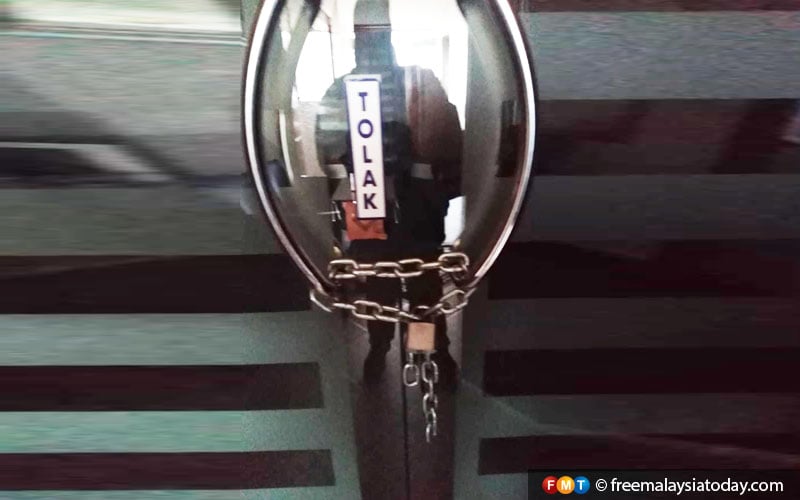 PETALING JAYA: Former Selangor executive councillor Haniza Talha’s office was found padlocked after her services were suspended yesterday, according to her officer.

The officer said he realised this when he went to the office this morning to take her personal belongings.

It is understood that the orders to shutter the office came from “higher-ups”.

“Her office was found padlocked.

“They did give her any time or access to take her things,” the officer, who declined to be named, told FMT.

Haniza, previously the housing and urban living committee chairman, when contacted by FMT said: “I am not sure who gave the orders (to padlock the door).”

In a statement yesterday, Amirudin, who had taken over Haniza’s portfolio, said July 10 would be her last day in office.

On June 29, the PKR Central Leadership Council agreed with the recommendation of the party’s disciplinary board to sack five members, including Haniza.

Haniza had her membership suspended on April 6 for holding a meeting with Mohamed Azmin Ali and former PKR vice-president Zuraida Kamarudin at a hotel in Kuala Lumpur last February.

Last month, Haniza launched a new NGO, Nation of Women (NOW), which she heads. It will serve as a new platform for PKR members who have been sacked.

Karl-Heinz Rummenigge: Neuer is world-class, and Ter Stegen is on the way to it
Chelsea are stepping up negotiations for Havertz after Bayer's relegation from the Europa League, Cech is involved in them
Messi bought a penthouse in Milan. It was reported that Inter is Interested in the player
Real advance refund the Youngster of rental Sociedade. Zidane is impressed with his performance
Barys 20 days before the start of the KHL: they do not know where to play, Legionnaires are cut off from the team
Areolaa returned to PSG after a loan spell at Real Madrid
Manchester United can lease Ousmane Dembele for a year with a buyout obligation
Source https://www.freemalaysiatoday.com/category/nation/2020/07/11/haniza-talhas-office-found-padlocked/

Adidas has seen no impact on sales from race row, says CEO

Zac Efron to star in Three Men and a Baby remake

Trump says his ‘great’ relationship with Xi soured after Covid-19

Sarawak bracing for haze as number of hotspots in Kalimantan rises

Water supply in Gombak to be fully restored tomorrow morning

Scientists ask: Without trial data, how can we trust Russia’s Covid-19 vaccine?

Boustead Holdings sues ex-chairman, five others for £6.4m for breach of fiduciary duty

Four months’ jail for Nepalese who beat up security guard

New Zealand locks down Auckland upon virus’ return after 102 days

Medical masks best against virus, not cotton or bandanas

TEMCO implementation by Perlis ahead of federal govt not an issue, says MB

Tengku Zafrul: Moratorium on loan repayments estimated at RM66b as of end-July

Putrajaya to limit additional allocations to govt ministries to once a year, Dewan Rakyat told

China reinstates tourist visas to Macau in boon for casinos