Height of irony? Banksy painting on consumerism to be sold at auction 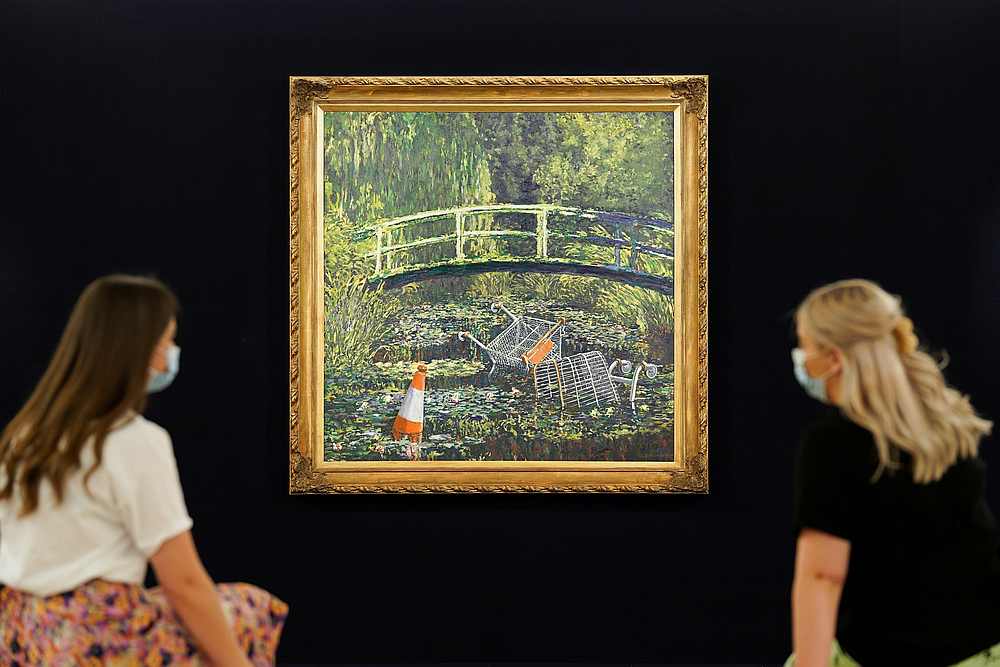 Banksy's 'Show Me the Monet' is expected to fetch between £3 million and £5 million at the Sotheby's 'Modernités / Contemporary' sale. — Picture courtesy of Banksy via AFP

LONDON, Sept 22 — The unlikely association of Banksy and Monet will soon be attracting the attention of art collectors from around the globe. Sotheby's is preparing to sell "Show Me the Monet" by the British street artist as part of its Modernités/Contemporary auction, which will be streamed live from Paris and London on October 21.

Ironic as it may seem, the canvas on the excesses of consumerism will likely be sold for several million pounds.

Dating from 2005, “Show Me the Monet” is one of a series of oil paintings entitled “Crude Oils,” in which Banksy reinterpreted several famous paintings by Van Gogh, Edward Hopper and Andy Warhol.

As the name suggests, “Show Me the Monet” is largely based on “The Water Lily Pond” by French impressionist Claude Monet, which the British street artist reworked by adding shopping carts and a traffic cone into the peaceful setting at Giverny.

“Recent years have seen a host of seminal Banksys come to auction, but this is one of his strongest, and most iconic, to appear yet,” points out Alex Branczik, Sotheby's European head of contemporary art.

However, the bidding may go much higher as it often does with works by Banksy. Last October, another painting by the artist, “Devolved Parliament,” finally sold for £9.9 million, which was five times the initial estimated sale price.

Will Banksy be forced to give up his anonymity?

The sale of “Show Me the Monet” may also benefit from a renewed enthusiasm for Banksy prompted by a recent ruling of the European Office for Intellectual Property (Euipo).

The British artist effectively lost a long-running trademark dispute with a greeting card company over his “Flower Thrower” graffiti, because the European authority judged that his anonymity prevented him from being formally identified as the author of the work.

“The predicament of Banksy's right to the work 'Flower Thrower' is clear. To protect the right under copyright law would require him to lose his anonymity, which would undermine his persona,” pointed out the Euipo ruling published on September 17. It follows that he”"cannot be identified as the unquestionable owner of such works as his identity is hidden.”

Many specialists are now wondering if in the light of this decision Banksy will ultimately be forced to reveal his identity to affirm his exclusive ownership of his works. — AFP-Relaxnews

Rashford with 4 goals led the race of scorers of the season Champions League
Holand scored the most goals (12) in the first 10 matches in the Champions League
Pirlo about 0:2 with Barca: this match will help Juventus grow
Griezmann did not make any effective actions in 6 matches under Koeman
Ole Gunnar Solskjaer: Leipzig made Manchester United work hard. Rashford had a big impact on the game
Roberto victory over Juventus: the Best response to the unrest in Barcelona - it's a game
Ronald Koeman: Barcelona played their best match of the season against Juventus. We had a lot of chances
Source https://www.malaymail.com/news/life/2020/09/22/height-of-irony-banksy-painting-on-consumerism-to-be-sold-at-auction/1905423

'Who the hell elected you?' US Senate tech hearing becomes political showdown

Tawfik Ismail: Malaysia needs moderation to have a future

Audible launching free podcasts: What difference does it make?

Staring at a screen all day? Tips for keeping dry eye at bay

Europe a sea of red: German shares plunge up to 5pc on emergency lockdown

US plays down China’s sanctions over Taiwan arms sales

Only 4.5 mil submit forms in e-Census

How a recruitment plan can save a small business

No more excuse for drink-driving

Demand for gadgets up due to WFH trend

MoE: All schools to close in Kuching from Oct 30 to Nov 13

Hospitals in Wisconsin, Texas under strain as Covid-19 cases surge

Make work-from-home work for you with these products

Well... the voters are to blame

Hafidz donates sushi to the needy every week

Five nabbed for allegedly stealing over four tonnes of steel