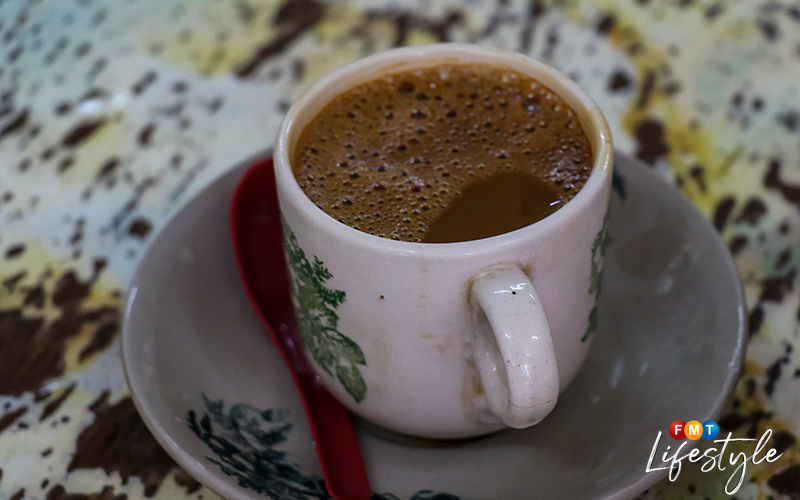 Kopi is poured repeatedly through muslin cloth to extract maximum flavour and was once the drink of choice for caffeine chasers and drug addicts.

Kopi is poured repeatedly through muslin cloth to extract maximum flavour and was once the drink of choice for caffeine chasers and drug addicts.

The unassuming cup of kopi, a daily staple for most everyday people, is spilling over with secrets.

Aside from the rich caramel taste of margarine-roasted beans, kopi used to be brewed with opium-infused water.

In order to understand how this practice came about, one has to look at the kopitiam’s sordid and somewhat fascinating history.

The very first kopitiams, or Malaysian-Chinese coffee shops, were born out of the classic combination of economic hardship and entrepreneurial grit.

Almost overnight the coffee-drinking culture boomed. And soon the control of the distribution of coffee beans meant this once humble bean suddenly had the power to make some men rich – very rich.

This was precisely the dream of many immigrants, none more than the Hainanese Chinese.

However, upon arriving to Malaya, small communities of Hainanese immigrants found themselves struggling to communicate with the locals, and so were often hired as cooks, servants, and cleaners for wealthy European and Peranakan households.

This was the reality for most until the economic downturn of 1920, when political instability caused civil unrest, and subsequently sparked bold ideas to combat the growing insecurity about the future.

Luckily, sentiments were not the only thing that was low during this time. Property prices had also dropped significantly.

Many Hainanese saw this as the perfect business opportunity, and they quickly set up small restaurants where they could utilise their existing culinary skills.

They were so successful, that in just over 30 years, kopitiams could be found on nearly every corner.

People loved their kopi. So strong was their desire for the drink, that love for this thick brew even endured through war.

During the Japanese occupation, coffee beans were purchased off the black market for anyone needing a caffein fix. 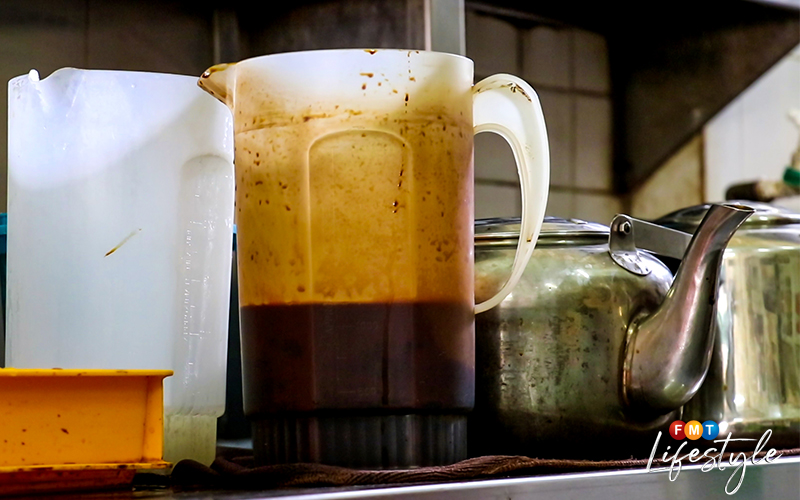 Today, the addictive effects of caffeine are well documented. Anyone who has had a caffeine withdrawal will understand how strong the pull to a cup of joe can be.

However, in the 1940s, with the economy recovering from the Japanese Occupation, shrewd business owners would take no chances.

Often, kopi would be prepared with opium-infused water in order to secure repeat customers.

Opium is a known highly addictive narcotic, very similar to heroin, and is one of the most addictive substances known to man.

Surprisingly, the effects of opium are short lived as the body quickly breaks the compound down.

In short, opium-infused kopi was the perfect beverage for winding down after a hard day’s work.

Unsurprisingly, the body builds up tolerance to the drug which resulted in customers ordering more kopi drinks to achieve the same familiar feeling of euphoria.

Despite its ethical implications, this recipe proved to be a sound business strategy and so it continued to spread. 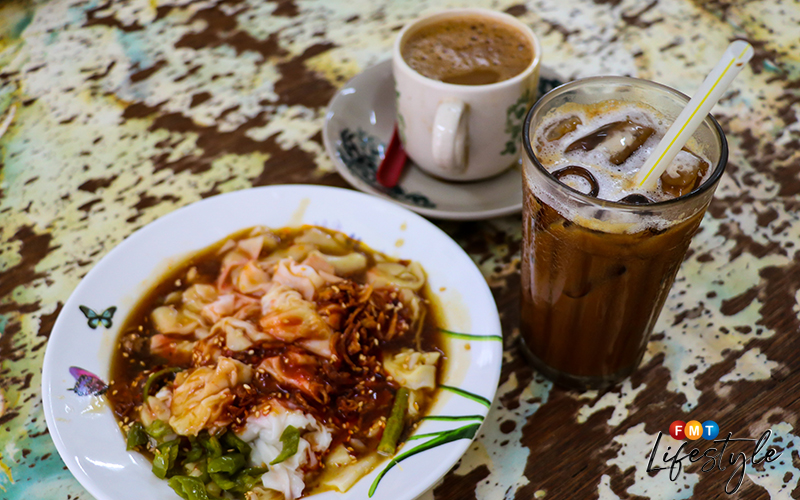 Kopi can be enjoyed hot or cold with a savoury meal.

It was so precious, that the practice of heating up old kopi in a ceramic cup on a charcoal burner in order to give it the appearance of being freshly made was also common, so as not to waste a single drop.

However, such unscrupulous practices did not go unnoticed. Local Malay and Indian communities often looked down on kopitiam operations and its culture.

To understand this better, it is worth noting that by the 1970s kopitiams had essentially become public gentlemen’s clubs.

The 1970s was a time when groups of men got together and were served opium-laced kopi, while happily gambling the night away.

Before long, kopitiam business owners wanted to capitalise on their audience and introduced escort girls and prostitutes to entertain their valued male patrons.

Burlesque shows and karaoke performances soon became a common, if not expected, sight.

Aside from providing an escape from everyday life, the very best of kopitiams were also used as venues for secret society meetings.

Cigarettes were also sold freely and smoking indoors was common. 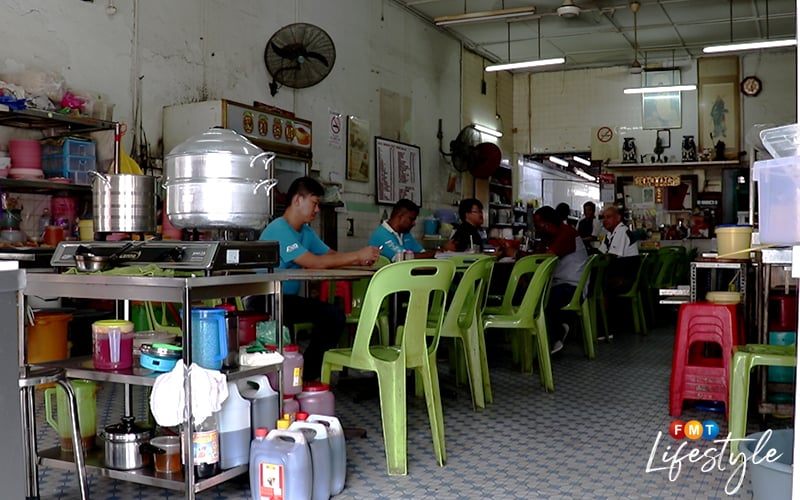 Open-spaced shop lots welcome customers from all walks of life.

The kopitiam was a lively, boisterous place for the common man and rich tycoon alike.

It is hard to imagine such fertile, creative public venues today except for in the hippest parts of London, or tucked away in New York’s West End, however such was the life of our common, unassuming kopitiam.

Today, kopi is safely enjoyed with condensed milk and sugar, and enjoyed with half-boiled eggs and kaya on toast.

The only “kick” you can get is knowing that it contains twice as much caffeine as the usual tall Starbuck’s brew.

UEFA will allow you to make 5 substitutions in European competitions. Of the top 5 leagues, only the Premier League will have 3 substitutions
Havertz scored the first hat-trick of his career
Alvaro Morata: Juventus is a real family. I couldn't say no to this club
Mourinho called the defeat to Bayern Munich in 2012 the worst in his career: Real Madrid was the best team in Europe
Actor Ryan Reynolds can buy the Wrexham club from the 5th English division
Suarez wept as he left the Barca base. He said goodbye to the team's players
Barcelona will try to hire defender Athletic Nunes if Garcia's transfer fails
Source https://www.freemalaysiatoday.com/category/leisure/2020/08/05/kopis-scandalous-history-and-secret-ingredient/

This is not the way, says Ku Li on Anwar's announcement of majority support

Use the census to make a difference, chief statistician urges M'sians

Foreign man arrested in PJ for trying to bribe cops

New Covid-19 cluster in Sabah: Udin is the eighth in the state

Shafie tightlipped over Anwar’s claim, wants to focus on Sabah

Vote Warisan to get the govt you want, Dr Mahathir tells Sabahans

Europe surges over 5 million cases as Paris, Madrid clamp down

Lampard urges Hudson-Odoi to seize his chance at Chelsea

Only King and Dewan Rakyat can determine who has majority support, says Ku Li

I am still your PM, says Muhyiddin during rally in Kota Kinabalu

Zynga out to cast spell with Harry Potter mobile game

Do we need a smartphone with a sliding flexible screen?

Weddings in Singapore can have 100 attendees from Oct 3, pilot to allow weddings at HDB common areas in Nov, says MOH

Singapore home-based workers may return to offices in cohorts, work-related events with up to 50 people allowed

World’s workers lost US$3.5 tril in wages amid pandemic

Ismail Sabri to ‘pink tag’ pranksters: This is not a joke (VIDEO)

After release from hospital, Navalny says he plans to have physiotherapy every day

Ringgit continues downtrend against US dollar at close

In heartfelt video, ex-CJ Malanjum says Opposition did little for Sabah in 55 years