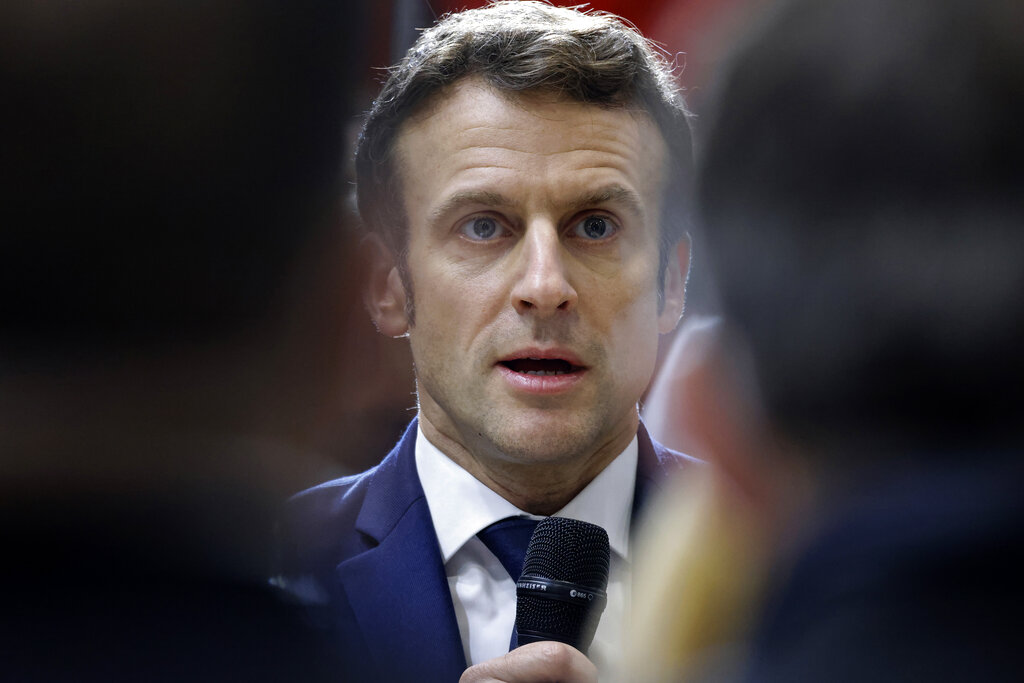 Emmanuel Macron has made his handling of the Ukraine crisis a major feature of his reelection campaign. (AP pic)

PARIS: French president Emmanuel Macron said today that he expects Russian forces to step up their attacks in the eastern Donbas region of Ukraine in the coming weeks, leading to further “difficult scenes” after the reported atrocities against civilians near Kyiv.

“This war is unfortunately not going to stop in the coming days,” Macron told RTL radio, adding that he saw little chance of “diplomatic concessions” from Russian president Vladimir Putin anytime soon.

Macron acknowledged like other western leaders that Putin’s retreat from areas near Kyiv could presage a focus on capturing areas in the east and south to create a land link between Crimea and the Moscow-backed separatist statelets of Donetsk and Lugansk in Donbas.

“May 9 is a national holiday for Russia, an important military event, and it’s almost certain that for Putin May 9 must be a day of victory,” Macron said, referring to the holiday marking Russia’s defeat of Nazi Germany in World War II.

“They are going to concentrate their efforts in the Donbas, and we’re going to experience very difficult scenes in the coming days and weeks,” he said.

Macron has held multiple telephone talks with Putin since he launched his invasion of Ukraine on Feb 24, in particular on humanitarian aid for residents in bombarded cities, but so far to little avail.

But he rejected claims from critics that his discussions with Putin were futile, saying the dialogue would prove essential for ensuring geopolitical stability once the fighting ends.

“There won’t be any peace in Europe if we are not able to prepare for the day after,” he said.

Macron has made his handling of the Ukraine crisis a major feature of his reelection campaign, which comes to a head Sunday as the French head to the polls for the first round of voting.

Polls suggest he will proceed to the April 24 run-off against far-right leader Marine Le Pen, whom Macron has accused of complacency with regard to Putin in the past.

“I note the complete absence of all National Front MPs in the European Parliament when it comes to sanctioning Russia, which shows you the ambiguities some people still have with this country despite the war,” Macron said, using the former name of Le Pen’s National Rally party.

The truth about TikTok’s ‘fresher for longer’ tips and tricks

Falling oil price and weak sentiment weigh down on the ringgit

Poor showing at Wall Street weighs down on Bursa

Apple Pay Malaysia: Here are two things you don’t get with Samsung Pay

At this university, students can take a well-being course to boost their mental health

How empathy and hypnotherapy go hand-in-hand

LTAT CEO explains that all six LCS ships must be built together, RM6b bulk order purchase to save cost

When not even the PM’s phone is safe

Does wine consumed on vacation taste the same at home?

Why have chicken prices increased in Malaysia?

One killed as blasts rock Russian air base in Crimea

Trump solicits donations after FBI search of his Florida home

Gymnast Joe Ee to focus on exam, with eye on Asian Games

Learn from Japan on dealing with ageing population, says envoy

Thai PM will stay in power another 2 years, says deputy

Law minister: Anti-hopping law expected to be enforced by mid-Sept

Serena says she is ‘evolving away’ from game with retirement talk