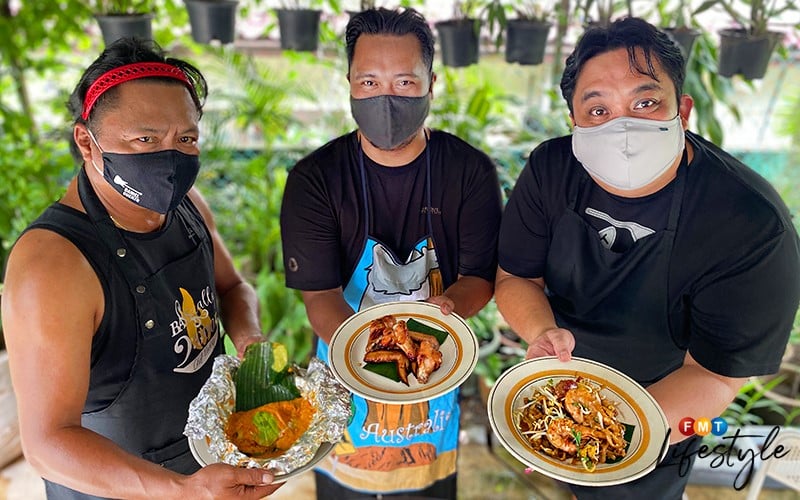 (L-R): The Soliano brothers, Daniel, Dado and Don each with their speciality – baked fish with chilli, chicken wings and char kway teow (non-halal).

KUALA LUMPUR: The musically-inclined Soliano family, household names among Malaysians for generations, are singing a different tune these days.

With most live performances grinding to a halt because of Covid-19, this talented family of singers and musicians are churning out another kind of music for the soul – food!

Operating from their home in Bangsar, brothers Daniel, Dado and Don are getting standing ovations for their charcoal-fired hawker fare that is leaving many a customer drooling for more.

A plate so good, there is barely any guilt in confessing it is better than what Penang has to offer. How could this be? 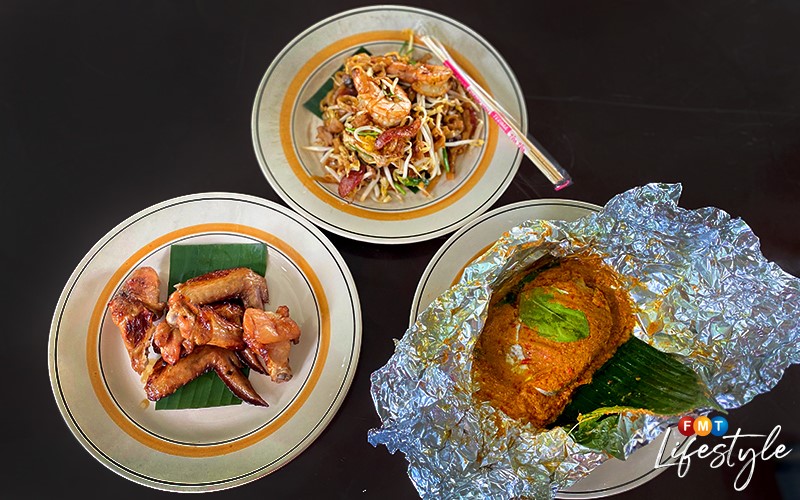 Don Char began humbly enough in Langkawi where Don, a full-time bass player then, used to unwind by indulging in his second love – cooking char kway teow. He was the official cook at family gatherings.

“It began with our first Christmas bazaar in 2008 when I cooked for my family and the Pulau Langkawi folk. It was called Perdana Char Kway Teow because I was living in an apartment called the Perdana Beach Resort,” Don says.

While he cooked up a storm, Joy and Vianne would bring the house down singing their own version of the Pussycat Dolls’s Don’t Cha: “Don’t cha wish your kway teow was hot like me” and the name Don Char stuck. 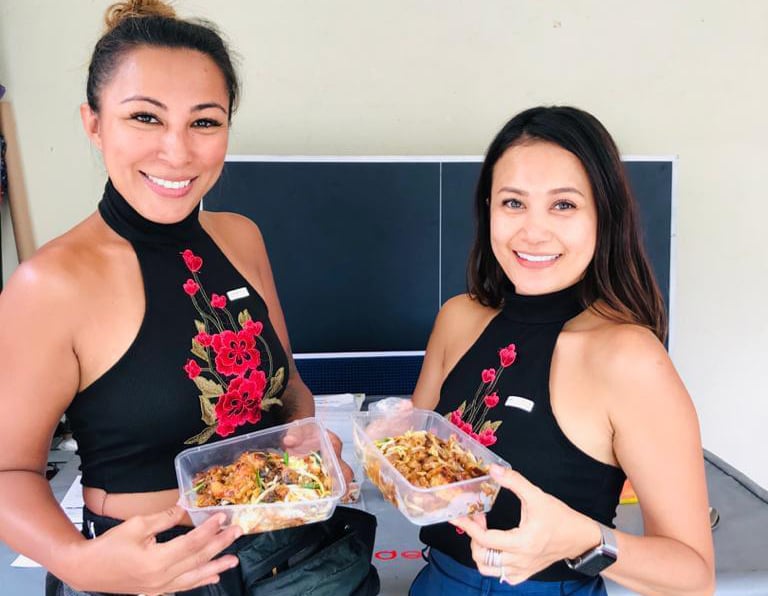 However, the Covid-19 pandemic put a somewhat nasty spin on things and when the Movement Control Order brought their daily jobs as musicians to an end, the family decided it was the time to revive Don Char.

“We began by selling it to our family because, after all, they are our biggest critics. Their response was encouraging so we branched out to our personal social media followers and from there we expanded to the mass market,” said Joy.

Don admits that the whole exercise was rather nerve-wracking at first because people knew them as performers, not cooks.

Cooked over a charcoal fire, the chicken wings are a definite must-try. Dado’s secret marinade checks all the boxes for taste and texture, and the tender meat just begs for a second bite. 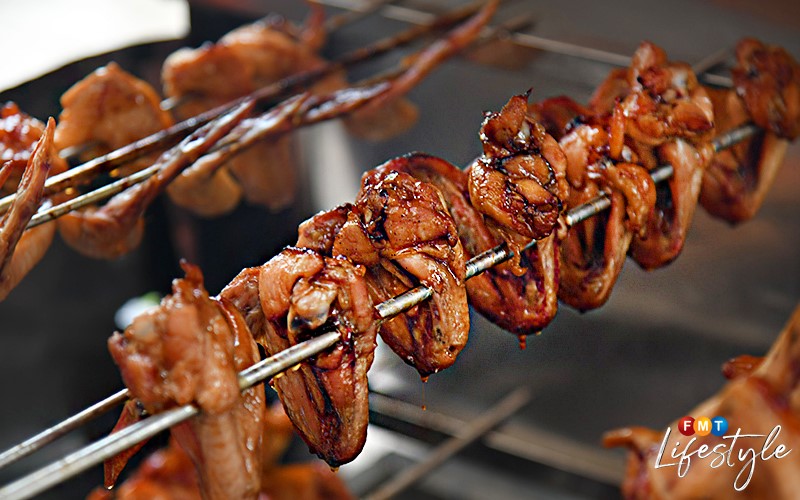 Don Char’s chicken wings are a must try with Dado’s secret marinade.

The baked fish is an equally big hit, and for those afraid of spice, don’t be. The chilli coating may seem menacing but looks can be deceiving. It’s actually not overpowering in the least but delivers a sweet-sour flavour that works so well with seafood.

Got your gastric juices churning? A word of caution – save your hunger for Fridays and Saturdays only as Don Char does not operate daily. Sometimes, not even weekly. But there’s a good reason why.

“It’s a pretty huge team and all of us have different schedules so we can only operate twice a month.

“We decided to sell on one working day, which is Friday, in order to give office folk the chance to enjoy our food during office hours or to have the food sent to their office,” Joy explains, adding that Saturdays are perfect for those who wish to eat in with the family.

The response to Don Char so far has been overwhelming, says a clearly elated Joy, who adds that music and food share one similarity – everything has to fall into place organically to achieve a memorable effect.

But what sets Don Char apart from other hawker fare? Hands down, the charcoal fire, which Joy believes lends a certain aroma to all three dishes.

Don Char can also be counted on for fresh ingredients as the Solianos regularly do their marketing for fresh seafood in Kuala Selangor. 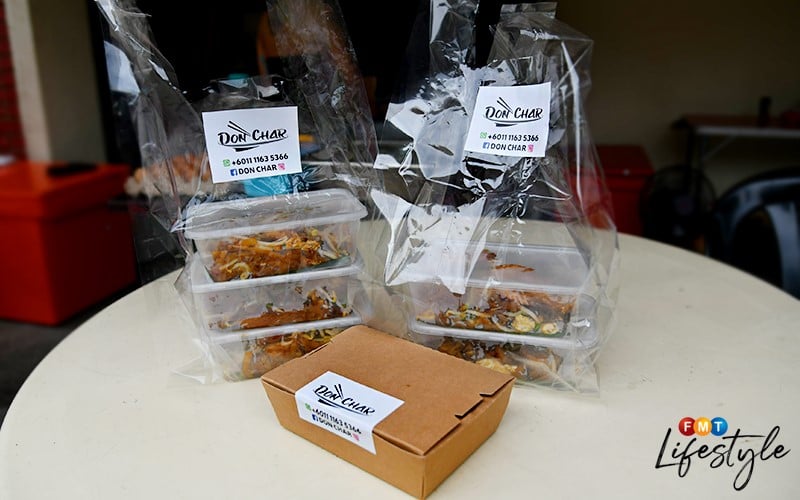 Boxes of char kway teow all packed and ready to be delivered to ravenous customers.

Laughter is loudest where the food is best and this couldn’t be any truer than at Don Char’s.

Along with the heady aroma of chicken wings roasting on the fire and the clink-clank of flat rice noodles being stir-fried in the wok, there’s a light-hearted stream of laughter and jokes traded among the Solianos, besides singing and strains of music in the air which truth be told, helps deliver that secret ingredient to any tasty dish – love.

The next time you have a craving for hawker fare, place your orders via WhatsApp at (011) 1163 5366 or check out Don Char’s Facebook page for updates.

You can either collect your orders yourself at the gate or have the food delivered to your address – the choice is yours. Happy eating, everyone!

Hans-Dieter flick: Bayern players had to overcome the pain threshold to beat Sevilla
Julen Lopetegui: Neuer is an incredible goalscorer. Sevilla didn't use their chances
You should see Goretzky's goal again. Muller's goal and levandowski's discount - the magic of mutual understanding 🤝
Ivan Rakitic: We saw how important Neuer is for Bayern
Mueller - the best player of the match for the UEFA super Cup between Bayern Munich and Sevilla
Sevilla have five defeats in matches for the European super Cup. This is an anti-record
Bayern won 4 trophies in a year. To repeat Barca's record, you need to take two more
Source https://www.freemalaysiatoday.com/category/leisure/2020/08/05/musical-family-solianos-are-now-char-kway-teow-maestros/

‘Enough is enough’: China slams US over virus at UN meet

My politics is different from Musa’s and voters know it, says Anifah

5 likely reasons why the air-cond is blowing hot air

Louisville braces for another curfew as racism protests erupt

What exactly is 'nouvelle cuisine'?

Pinterest's 400 million users to get access to Fashion Week shows

With polling in Sabah tomorrow, still no clear sign of a winner

10 ways to stop being your own worst enemy

It’s David vs Goliath in Moyog

Experts: It is the King’s prerogative

Experts foresee tight race between Warisan Plus and GRS

MCA candidates leaving it to voters

PM: We can help each other

Pinterest’s 400 mil users to get access to Fashion Week

UK car output falls by nearly half in August

70% of all cigarettes sold by end-2020 will be smuggled stuff, says tobacco firm

Electrified by Tesla, Chinese startups are on the charge

BMW fined US$18m in US over inflated sales data

If world handles climate like Covid-19, UN chief says 'I fear the worst'

Mary Trump, niece of Donald Trump, sues US president and family for fraud

As clock ticks down to Sabah election, a laser-focused Shafie Apdal keeps calm and campaigns on for Warisan

It’s not for Bung to say we can’t get 20% oil royalty, says Sarawak minister

What Disney’s Mulan got wrong about Chinese culture

Spurs move posts to win away, Milan survive without Ibra in Europa action

Dr Wee tests negative for Covid-19, back in Sabah to continue campaigning

Best to resign if members of current govt withdraw their support, says Hisham

Sabah polls: Health Ministry calls for strict adherence to Covid-19 guidelines due to rising cases in the state

Djokovic out to make amends in Paris for US Open fiasco

What exactly is ‘nouvelle cuisine’?

McConnell, other Republicans split with Trump on peaceful transfer of power

Anyone can meet the King, say constitutional lawyers

Woman in carbon monoxide poisoning case out of coma