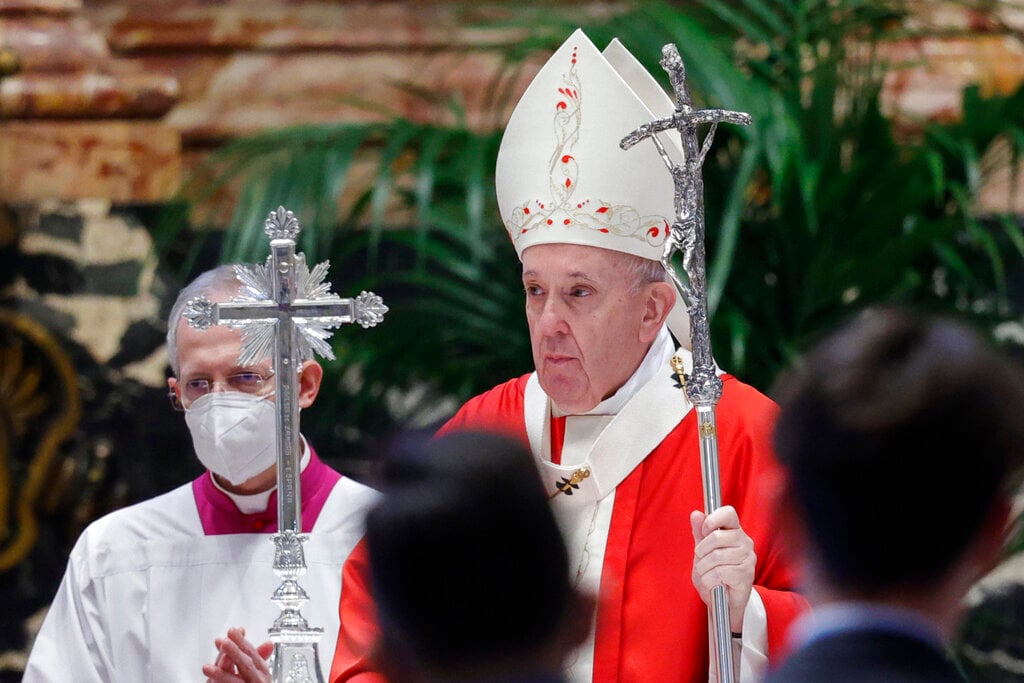 VATICAN CITY: Pope Francis led Palm Sunday services in an almost empty St Peter’s Basilica because of coronavirus restrictions for the second consecutive year and said the devil is taking advantage of the pandemic.

In pre-coronavirus times, Palm Sunday, which marks the start of Holy Week and leads to Easter, tens of thousands of people would pack St Peter’s Square holding olive branches and intricately woven palm fronds in an outdoor ceremony.

Instead, only about 120 members of the faithful participated in Sunday’s Mass, joining the pope and about 30 cardinals in a secondary wing of the huge basilica.

“Last year we were shocked. This year we are more under pressure and the economic crisis has become heavy,” Francis said in his traditional Sunday noon address after the Mass.

Italy is in the midst of another national lockdown, which is due to end after Easter. On Wednesday, the pope ordered cardinals and other clerics to take pay cuts to save the jobs of other employees.

“The Devil is taking advantage of the crisis to sow distrust, desperation and discord,” he said, adding that the pandemic had brought physical, psychological and spiritual suffering.

Since he was elected in 2013, Francis has made clear that he believes the devil to be real, saying in a 2018 document that it was mistaken to consider him a myth.

Nearly everyone who took part in the Mass, except the pope and the choir, wore masks.

In a small-scale version of a traditional Palm Sunday service, the 84-year-old pope and the cardinals processed to the altar holding palm fronds.

Palm Sunday commemorates the day the gospels say Jesus rode into Jerusalem and was hailed by the people, only to be crucified five days later.

During the Mass, the pope had a pronounced limp. He suffers from sciatica, which causes pain in his legs when it flares up.

The remainder of the pope’s Holy Week services – Holy Thursday, Good Friday, Holy Saturday and Easter next Sunday, will also take place with a limited number of participants.

Shut the door on banks like Citigroup that abandon Malaysia, says Nube

Trudeau presses Biden to prove US ‘serious’ about climate change

UK warships to sail for Black Sea in May as Ukraine-Russia tensions rise, reports Sunday Times

Used electronics trading platform Aihuishou to raise up to US$1b in US IPO, say sources

Earth Day summit a chance for Biden to show US serious about climate, says Trudeau

Minnesota police pledge not to threaten protest journos after clashes

Djokovic to host Serbia tournament a year after Covid fiasco

US, China vow to cooperate on climate crisis despite sky-high tensions

Oscars to be unlike it’s ever been before, says producer

Yam cake, a taro-ffic snack to devour and savour

US, China ‘committed to cooperating’ on climate crisis

Only the brave will survive – but who’ll be the one?

Cheering on Dogecoin to the moon

Singapore: In claim against AGC for compensation, Parti Liyani’s lawyer says prosecution made purposeless attacks on her

Baru Bian: Children from mixed–nativity marriages should be recognised as Sarawak natives

Penang cop killed in bike crash during pursuit of suspect

Minister should have turned down sponsored flight, say activists

Businesswomen eager for funds to expand their ventures

Aiming to get all teachers vaccinated in second phase

‘Vaccine is not bulletproof’

Malaysia’s most infamous criminal in the 80s: He was not ‘botak’ and his surname was not Chin

Senior citizen nabbed over assault of motorist in Pasir Gudang

Masidi: No truth to rumours of MCO in KK