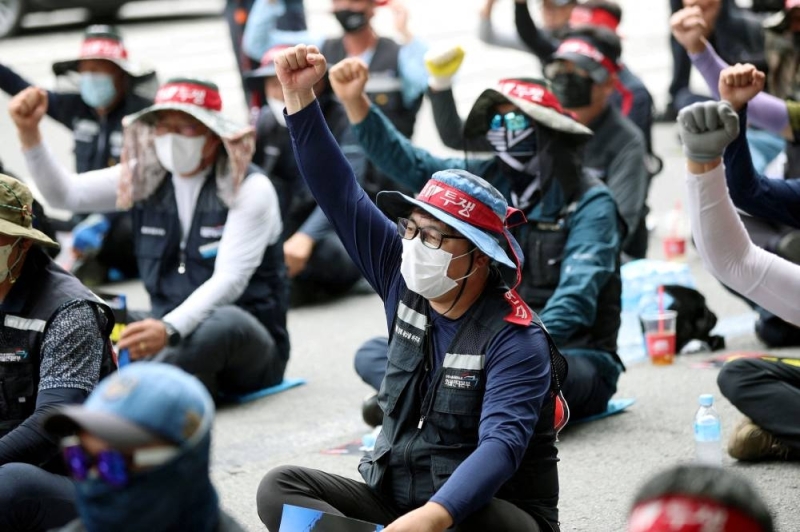 The strike by unionised truckers seeking higher pay has crippled ports like Busan in the export-dynamo economy, snarling the shipment of components and finished products for the automobile, steel, cement and liquor industries.

Steelmaker Posco plans to halt some plants from Monday due to a lack of space to store unshipped products. Automaker Hyundai Motor has cut production at some lines.

Hundreds of strikers were expected today to join the 100 or so who had gathered yesterday at the main gate of an enormous Hyundai Motor factory complex in the southern city of Ulsan near Busan, a union official said.

Dozens have been detained by police, local media said, but their protest has so far been mostly peaceful. The union and Yoon’s government have met four times but failed to reach an agreement.

Protesting against soaring fuel prices and demanding minimum pay guarantees, about a quarter of the Cargo Truckers Solidarity union’s 22,000 members were estimated to be participating in industrial action yesterday, the land ministry said.

The ministry has urged the truckers to return to work but said it would seek to reflect their demands in the legislative process and keep trying to end the strife through dialogue with the union.

The truckers demand an extension of subsidies, set to expire this year, that guarantee minimum wages as fuel prices rise. The government says it is up to parliament whether to change the legislation.

As the global economy struggles with supply bottlenecks, any prolonged slowdown in the production and shipments of chips, petrochemicals and autos could add to concerns of rising inflation and slowing growth.

South Korea’s inflation is set to hit a 24-year high 4.8 per cent this year, the Organisation for Economic Cooperation and Development said last week, while cutting its growth forecast to 2.7 per cent from a December projection of 3.0 per cent. — Reuters