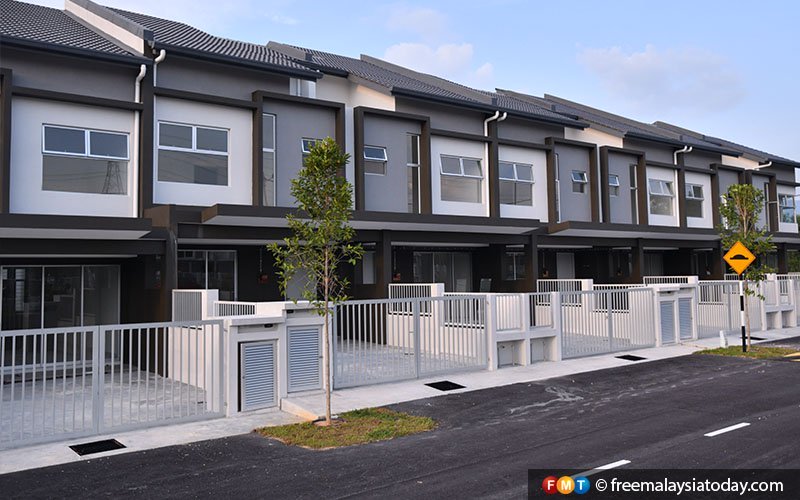 Many of those in the B40 and M40 groups still cannot afford to buy a home.

Concerns over affordable housing costs rising disproportionately to household incomes has been gaining traction among developers, buyers and policymakers in Malaysia of late.

Recently, Housing Minister Zuraida Kamaruddin encouraged property developers to focus on developing affordable housing projects priced at RM500,000 and below, as quoted in a news report.

However, the Valuation and Property Services Department (JPPH) revealed earlier that affordable homes priced between RM200,000 and RM300,000 made up 43% of the property overhang in the country in the first half of 2019.

This indicates that the excess supply of affordable homes has not solved the housing woes of those in the B40 and M40 groups as they still cannot afford to buy a home.

Property consultant, REI Group CEO Dr Daniele Gambero said “affordable” is a wide-open term which was not being adequately defined.

“The government’s intention is good, but an average Malaysian in the B40 and M40 categories is definitely unable to afford to buy a half-million (ringgit) house,” he told Property Advisor. 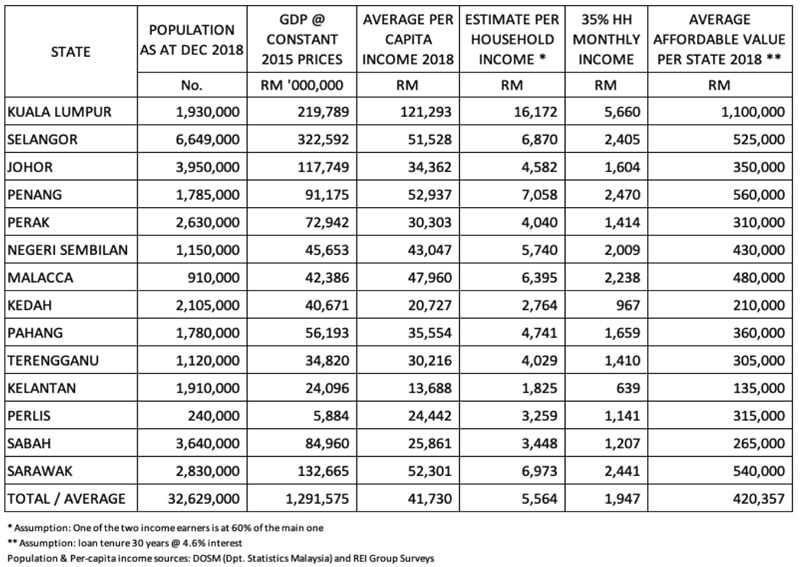 “The reasons for the lack of affordability in every state is different. But common ones include housing costs rising faster than incomes, the mismatch between property prices and affordability, scarcity of land and demographic changes such as population growth, ageing and changes in household composition.”

According to a survey conducted by the Department of Statistics Malaysia (DoSMA) and REI Group, as of December 2018, the population of Kuala Lumpur stood at 1.9 million, with a gross development product (GDP) of RM219.8 mil and an average per capita income of RM121,293.

The estimated income per household was around RM16,000, which makes 35% of a household’s average income RM5,600. From this, the average affordable value for Kuala Lumpur was RM1.1 mil.

The estimates above were done based on the assumption that one of the two-income earners is at 60% of the main one. It is also assumed that each loan tenure is for 30 years at 4.6% interest.

Hence, it is clear that there is a great disparity between income levels and home prices in each state.

A B40 income earner David Tan, 35, who resides in the city centre said his income is insufficient to buy a house. “I cannot afford to buy a house even after working for the last eight years. The current economic fallout of Covid-19 makes the situation worse. Look at the prices of the houses now, they are too high, and I barely make ends meet.

“With my income, I can only afford to buy a house below RM250,000. However, I think I will wait and see after the moratorium period ends. Perhaps I could get a good bargain. As for now, my financial situation does not permit it.”

A 38-year-old assistant e-commerce manager who declined to be named said one should only buy a house they can afford. “In my case, I can hardly save money even for a downpayment. I can only afford to rent at the moment.

“I hope the government will address this affordability issue and make the prices lower. I wish affordable homes would cost around RM200,000.”

The Land Professionals Association of Malaysia (Pertama) president Prof Dr Ismail Omar said what people are looking for is unlimited and what they can afford to pay to get is limited.

“The thing is that what you pay is cost and what you get is value. We enjoy receiving benefits and values and try to avoid paying costs,” he said.

He explained that South Australia’s housing submarkets are identified and classified according to postcodes so that housing affordability and income disparity are established in a proper way.

However, in different parts of the US, those housing submarkets are identified and classified to ensure big data on housing affordability and its relationship with income level is fair to everybody, he said.

“Indeed, with proper classifications of housing submarkets, lots of things are easier to manage and administer.

“The arrangement and handling of property values, property taxes and planning incentives and income distribution are made simplistic and more professionally done.”

According to Bank Negara Malaysia, Malaysia’s maximum affordable house price is RM282,000 based on the household median income.

However, the average price of new properties launched is RM417,262, proxied by the average transaction value in the primary market.

With the rising cost of living and the unequal distribution of income, it appears that more affordable housing may not be the solution.

Instead, the government needs to address the struggles of Malaysians trying to buy a house, stagnating wages, inflation and its nexus to affordability.

This article was written by Sharina Ahmad of PropertyAdvisor.my, Malaysia’s most comprehensive source of property data, property analytics and insights.

Owen on Barca: an Aging team. They don't look like they will reach the final, and they don't look like Barcelona
Monchi on Rakitic in Seville: He is my friend, but it is difficult financially, if not impossible
Borussia will offer Sancho a new contract if Manchester United do not agree to their terms by Monday
Giorgio Chiellini: Difficult seasons happen. We want to keep winning. Always
Messi is sleeping on an anti-virus mattress. What kind of fiction is this?
Solskjaer on the Europa League: Winning with Manchester United would be the biggest achievement of my career
Liverpool can buy defender Olympiakos Tsimikas for 13 million euros
Source https://www.freemalaysiatoday.com/category/leisure/2020/07/05/time-to-improve-affordability-not-build-more-affordable-homes/

Gutsy performance by Mcphee and Super KIP at Brno Circuit

Over 100 undergo Covid-19 tests in Penang

Winning Europa League would be proudest moment as a manager, says Solskjaer

Myanmar to probe deaths of two teens at juvenile centre

Anwar calls for end to ethnic-based parties, up to youths to decide

US health chief arrives in Taiwan on trip condemned by China

Part of Sarawak’s century-old Fort Renee up in flames

Covid-19: Another school in Kuala Sanglang closed for two weeks

Shafie: Over 3,000 native land titles handed over to Sabahans this year

Call for business hours extension in Sarawak’s zone one

Over 3,000 native land titles handed over to Sabahans this year, says CM

Lebanese call for an uprising after protests rocked Beirut

Independents under Dr M’s bloc to be seated together

175 new Covid-19 infections in Singapore, including three imported cases and one in the community

Perak plans to expand community garden to all districts

All roads to and from Kampung Sanglang to be closed tomorrow

Abe to avoid visit to shrine on 75th war anniversary

Johnson and Koepka set for another PGA final showdown