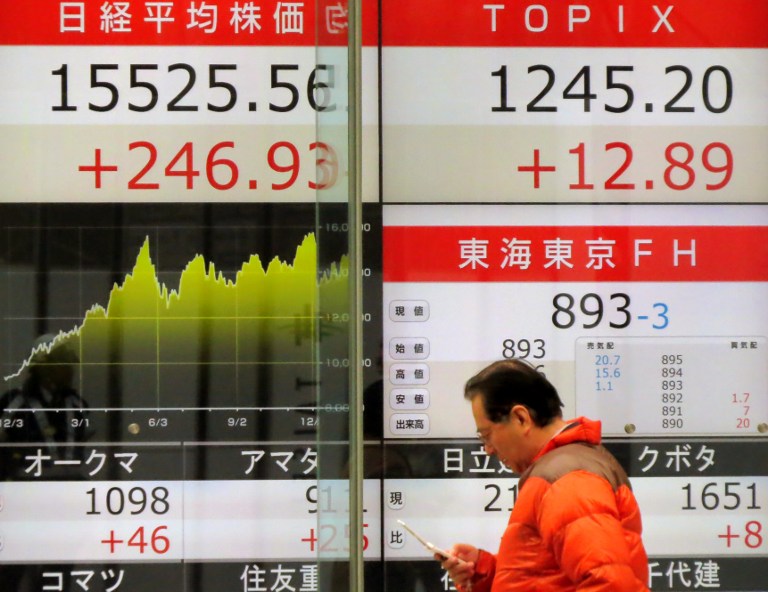 “Market participants are increasingly speculating that inflation will take place, and higher yields are a negative factor for fast-growing shares such as the IT and high-tech sectors,” senior strategist Yoshihiro Ito of Okasan Online Securities said in a commentary.

Expectations that the coronavirus state of emergency may be lifted in parts of Japan, however, is likely to support the  market, he added.

Markets have become jittery about the prospects that the pandemic recovery will ignite inflation and lead to rising lending rates, especially in the US economy, where Congress is moving forward on a US$1.9 billion (RM7.7 billion) stimulus plan.

Powell appeared yesterday in the first of two days of testimony before Congress ― a twice-yearly event ― and said that while inflation could become “volatile” this year as spending recovers from the pandemic collapse, those price increases are unlikely to be large or persistent.

In Tokyo, Toyota was down 0.51 per cent at ¥8,019 after the car giant said it will adjust domestic production due to a parts shortage following an earthquake in northern Japan last week.

It said it plans today to suspend five production lines at four plants, among a total of 28 lines at 14 plants.

Mitsubishi Motors was up 3.07 per cent at ¥302 after a report said the carmaker is set to withdraw from Europe.

Toshiba was up 0.57 per cent at ¥3,520 after a report said the engineering firm and General Electric are in talks about joint production of offshore wind power facilities.

Ronaldo hit the wall twice with a free kick in the game against Verona. He has 66 shots and 1 goal in Juve
Andrea Pirlo: The young Juve players didn't understand the importance of the details. I asked Ronaldo and Alex to talk to them, but it was not enough
Verona coach: We only gave Juve one chance to score, and it's not easy when they have Chiesa and Ronaldo
Ronaldo has 47 goals in the last 47 games in Serie A
Thomas Tuchel: Chelsea are in good shape and want to be the first to beat Manchester United on their own field in the Premier League
Conte on the Inter: When you don't win for 10 years, you get used to it, you look for excuses. I increased the pressure and became a pain in the ass
Ronaldo has 4 goals in the last 4 matches in Serie A. He is ahead of Lukaku by 2 goals in the list of scorers
Source https://www.malaymail.com/news/money/2021/02/24/tokyo-stocks-open-lower-on-lingering-inflation-worries/1952370

Arrest warrant issued for suspect in murder of Yale student

Three things from the Six Nations

5 ways to ace that question about your previous job

Malaysians are thankful for the lifeline

Parents busy with getting kids ready for school again

‘A possible drop in numbers by May’

UK to give £12b to new Infrastructure Bank

Yuck! 5 smelliest foods in the world

UM prof says sanitising of buildings is a wasted effort

Biden to make announcement on Saudi amid Khashoggi murder report

Myanmar’s UN envoy vows to fight after junta fired him

Biden says he will make announcement on Saudi Arabia tomorrow

Why you should never skip paying your taxes

The fine’s not the thing, says psychologist

Labuan woman stranded in Sarawak for over 30 years returns home

Covid-19: Kg Sinsingon and Kg Lotong in Sabah under enhanced MCO until March 12

US ‘deeply troubled’ by Russia’s intolerance of free speech

Myanmar ambassador to the United Nations has been fired

City make it 20 straight wins with victory over West Ham

US in delicate balancing act as Saudi prince spared sanctions