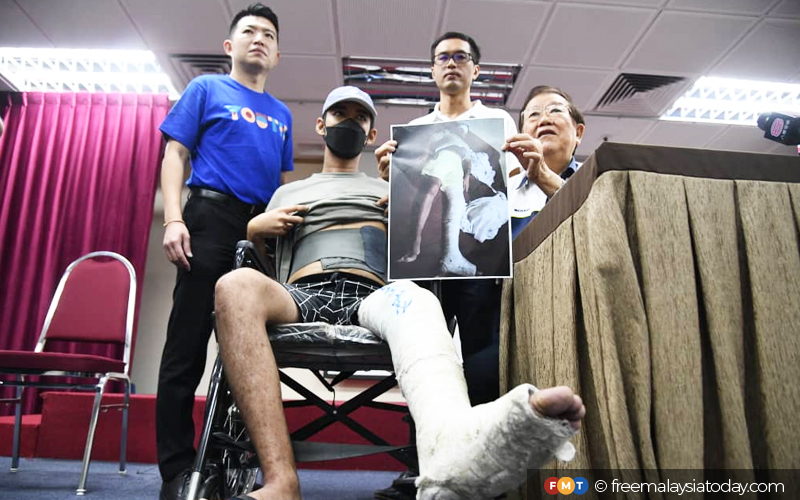 Cheah (in wheelchair) speaking to reporters as Michael Chong holds up a photo showing the injured victim.

KUALA LUMPUR: A human trafficking victim, who was smuggled to Myanmar and forced to work as a scammer, has claimed that hundreds of Malaysians are still being held captive in a “little village” in Myawaddy.

Identifying himself only as Cheah, the 19-year-old said he was duped into working as a waiter at a karaoke centre in Thailand before being taken to Myawaddy in southeastern Myanmar.

He said that after he responded to a job advertisement on Facebook in March, syndicate members picked him up in his hometown in Melaka and brought him to a Thai-Myanmar border town, Mae Sot, using illegal routes, where the journey extended to Myawaddy.

He said he was taken by surprise when he met “hundreds” of Malaysian victims in Myawaddy, held in a four-storey building.

“They were monitored by members of the syndicate who are also Malaysians. The supervisors are known as ‘motivators’ who would brainwash us into scamming people worldwide,” he told reporters at Wisma MCA here today.

Cheah said he was forced to be involved in a love scam operation where his targets were Chinese living in the US, Singapore and Taiwan.

“I only worked for three days. After that, they hit me with a baseball bat every day because I refused to work,” he said.

He said he was involved in a scuffle in April with the syndicate members who pushed him down from the third floor, resulting in his leg and rib being broken.

The syndicate, however, took pity on him and sent him to the hospital where he was warded for two weeks.

“After I was discharged, the syndicate said they were willing to free me but asked for RM120,000 in ransom. After negotiating with my family, they agreed to RM70,000.

“My family managed to raise the funds to get me home,” said Cheah, who returned home last month.

MCA public services and complaints department chief Michael Chong said he was informed by the Malaysian embassy in Cambodia this morning that eight other human trafficking victims had been rescued.

“Our embassy officers went to the detention centre this morning to meet them. Hopefully, they will return home soon.

“I was informed that seven of the victims were beaten up while being held,” he said.