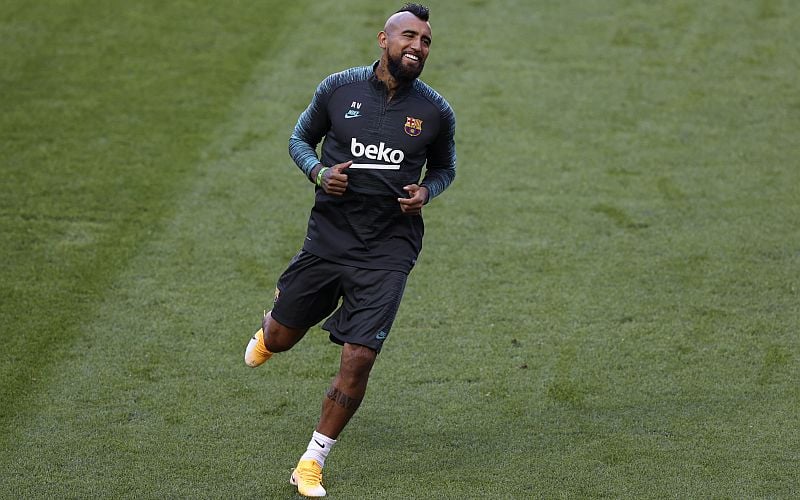 Barcelona’s Arturo Vidal runs during a training session at the Luz stadium in Lisbon on Thursday. (AP pic)

MADRID: Arturo Vidal has warned Bayern Munich his Barcelona team are the best team in the world ahead of their Champions League quarterfinal in Lisbon on Friday.

And Barca coach Quique Setien was in confident mood too, insisting Bayern’s in-form striker Robert Lewandowski is “clearly” not at the level of his captain Lionel Messi.

Their comments come after former Bayern midfielder Lothar Matthaus told German newspaper Bild earlier this week Lewandowski has overtaken Messi as the best player in the world and he no longer fears Barcelona.

Vidal spent three years at Bayern, who are deemed heavy favourites to reach the semis after winning the German title and hammering Chelsea, while Barca crumbled in La Liga.

But Vidal said on Thursday Barcelona’s opponents should not be complacent. “They are very confident but tomorrow they aren’t playing against a Bundesliga team, they’re playing against Barca and Barca is the best team in the world.”

Barcelona surrendered the Spanish title to Real Madrid after winning only seven of their 11 matches following the restart. They then laboured to a 3-1 win over Napoli in the Champions League last 16 on Saturday.

Asked about the expectation that Bayern will go through, Vidal said: “I get it. We are the best team in the world but in La Liga we haven’t shown it in the last few games.

“We lost the league but we have Leo, we have other players and if we play well, we can beat anyone. Tomorrow we have to show it in the field.”

Messi is likely to be key at the Estadio da Luz, with some suggesting all Barcelona’s hopes rest on the 33-year-old’s shoulders.

Yet Bayern have their own trump card in Lewandowski, who has scored an astonishing 53 goals in 44 games for his club this season. Messi has hit 31 goals in 43 matches for Barca.

“Lewandowski is a great footballer but he is not at the level of Leo, clearly,” said Setien.

“Lewandowski is in great form, he has scored 13 goals in the Champions League and it is true that he is very well supported by many teammates who can also do damage.

“He’s in a great moment but Leo is too. We saw it the other day against Napoli.”

Setien also denied Barcelona’s chances are entirely dependent on their captain. “Messi can help win the game, obviously, but I have always believed in the strength of the team,” Setien said.

“You also have to help Messi, give him the ball. He can create his own fireworks but without the strength of the team, Leo would not be Leo, like any player.”

Setien said Ousmane Dembele will be in the squad and could feature but the France World Cup winner is unlikely to start after being out since November with a hamstring tear.

“It’s satisfying for everyone even to have him in the squad and he is in a position to play a few minutes if we need him,” said Setien. “He’s been out for almost a year, it’s true, but we believe he could go out and play well.”

The tie will be a single match in line with the reformed Champions League format from the quarterfinals onwards, with the winner to meet either Manchester City or Lyon for a place in the final on Aug 23.

Mourinho on the exchange with Lampard: just expressed the opinion of the old coach to a young colleague. Be calm when the team wins
The Premier League was spooked by chaos with a penalty for playing with his hand (6 for 3 rounds). The judges were asked to take into account the context - proximity to the opponent and the position of the hands
Bayern midfielder kuizans will be examined in Leeds today, the transfer amount is 20 million euros
Bayern can sign Lemar from Atletico
Kolasinac will move to Bayer from Arsenal for 11 million euros + bonuses (Fabrizio Romano)
Dyer called the toilet the best player of the match between Tottenham and Chelsea
Ferencvaros will play in the Champions League group for the first time since 1995. This is the longest break between the first and second appearances
Source https://www.freemalaysiatoday.com/category/sports/2020/08/14/vidal-declares-barca-best-team-in-the-world-ahead-of-bayern-test/

Want to boost your Instagram? Become a fruit picker in Australia

FAA chief Dickson to put Boeing 737 MAX to the test

23 new Covid-19 infections in Singapore, including four imported cases and three in the community

Saudi economy shrank by 7pc in Q2 as Covid-19 hit

Kuwait’s new emir takes over an economy paralysed by politics

Bukit Aman: Mohamaddin Ketapi to be quizzed over remarks on Lahad Datu incursion in Sabah

Mohamaddin to give statement over Lahad Datu intrusion remarks

US fighter jet crashes after collision with refuelling plane

'This clown,' 'Nothing smart about you': Un-presidential insults fly in first Trump-Biden debate

Overwhelming response for yet to be launched Proton X50

On social media, Najib joins in as Umno Youth and Armada chiefs squable

How an illustrated Quran project led to Charlie Hebdo attack

With masked guests, Dior returns to catwalk in Paris

Helen Reddy, singer of feminist anthem ‘I Am Woman’, dies at 78

As next Covid-19 wave looms, Anwar says not extending loan repayment moratorium would be dereliction on Putrayaja’s part