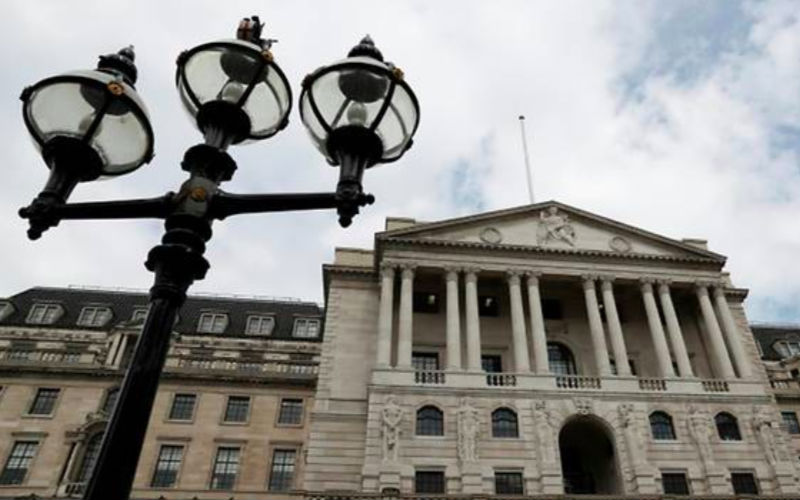 The Bank of England in the City of London. (AFP pic)

LONDON: The Bank of England on Thursday unveiled an extra £100 billion of cash stimulus to prop up Britain’s coronavirus-hit economy, despite a slump less severe than first thought.

The BoE, reporting the outcome of a regular meeting, said policymakers voted by a majority of 8-1 to hike the central bank’s quantitative easing (QE) stimulus.

The pound held steady after the cash infusion to help retail banks lend to businesses — a move analysts said was ultimately aimed at avoiding deflation — a spiral of falling prices.

The QE expansion was widely forecast after the UK economy contracted by one fifth in April amid a nationwide lockdown to try to halt the spread of the coronavirus outbreak.

Yet policymakers believe that the economy will fare better than anticipated as lockdown restrictions are relaxed.

After UK GDP contracted by around 20% in April, “evidence from more timely indicators suggests that GDP started to recover thereafter”, said minutes of the BoE meeting.

“Payments data are consistent with a recovery in consumer spending in May and June, and housing activity has started to pick up recently,” they added.

Policymakers conceded however that “the labour market has weakened materially”, while they expect an increasing number of workers to be furloughed — or have wages backed up by the state — in the second quarter.

The BoE’s latest cash injection means that £745 billion in QE is swirling around the UK economy to boost growth — as a result of economic shocks consisting of the global financial crisis, Brexit uncertainty and the Covid-19 outbreak.

The BoE had already added £200 billion of QE stimulus in March and slashed borrowing costs to the current historic nadir in response to the virus.

Under QE, the central bank purchases assets such as government and corporate bonds to stimulate lending and economic activity.

The pandemic has meanwhile killed more than 41,000 people in Britain, making it the third worst-hit country after the United States and Brazil.

The Covid-19 disease, which has claimed 443,000 lives worldwide, has sparked global moves to stem devastating economic fallout including trillions of dollars from the US government and the Federal Reserve.

A recent string of dire British economic data prompted expectations that more Bank of England QE was on the way.

The annual inflation rate slid to a near four-year low at 0.5% in May, while unemployment claims have more than doubled during the UK lockdown that began on March 23 and which is slowly easing with non-essential shops reopening this week.

“With inflation plunging nearly as fast as Britain’s reeling economy, the Bank of England is having to spray even more emergency cash around,” noted Ulas Akincilar, head of trading at the online platform INFINOX.

“Clearly the primary goal of the bank’s latest dose of monetary stimulus is to keep the most at-risk sectors from falling into an economic abyss.

“But there’s an important subtext behind the extra £100 billion — to keep at bay the looming prospect of deflation,” he added.

When prices drop over a period of time, consumers usually hold off purchases in the hope that they will fall even further, causing businesses to close.

Analysts have warned that British unemployment will surge further later this year when the government turns off the taps.

The Treasury has launched its own multi-billion-pound measures to help those affected by the current economic fallout — notably its costly jobs retention scheme helping 9.1 million people at the last count.

However its furloughing is due to end in October.

Antonio Conte: I will not hesitate before leaving if Inter are not happy with what I am doing
Diego Godin: Inter will do everything to keep second place. Now we need to think about how to catch up with Juventus
Harry Maguire: Manchester United want to fight for trophies
Zidane on the victory over Granada: real suffered as a team. Two more games, we haven't won La Liga yet
Real have won 11 games with a minimum score in La Liga for the first time in 11 years
Akinfenwa after Wycombe's exit to the championship: the Only person who can charge me even more is Klopp
Ramos on the title: I hope that Real Madrid will celebrate the championship on Thursday. Everything is in our hands
Source https://www.freemalaysiatoday.com/category/business/2020/06/18/virus-fighting-bank-of-england-pumps-out-extra-100-bil-stimulus/

Johor cop killed after car crashes into lorry along PLUS highway

OCM under fire over move for constitutional changes

New Zealand, US... Which country is the most optimistic on climate change?

Realme’s next smartphone will come with a huge 6,000mAh battery

Seven days and counting without water in Labuan

UK has 100,000 modern slaves but most go undetected, says study

Perikatan, formed by defections, says no to ‘anti-hopping’ law for now

NZ opposition leader quits after just weeks in the job

Umno drops suits against 9 who defected to PPBM

Solskjaer rejects fatigue as reason for draw with Southampton

3 reasons to opt for fashion rental

China coronavirus cases ease on July 13, no new ones in Beijing

Of skin colour and off-colour remarks

Fauci blames US virus surge on failure to shut down completely

California’s new lockdown dims outlook for US growth in pandemic

US deficit soars to record amid pandemic relief payments

No spectators for rest of PGA Tour season, saya officials

Study predicts deaths from 3 diseases to surge amid pandemic

WHO says too many countries headed in ‘wrong direction’ on virus

Will Facebook completely ban political ads in days before this year's US election?

Installing a brand new roastery during a Covid-19 lockdown? Singapore's PPP Coffee did it in pursuit of the sweetest cup

Gearing up for reopening

M’sians in Melbourne stay calm despite spike in cases

Chaos on first day of sitting

Change of guard in the House

‘An honour to be appointed’

Ongkili’s absence in the House not due to stroke

PM: We had no time to lose

I’m not making Rosmah a scapegoat’

MPs briefed on Covid-19 SOP in the House

Woods grouped with Koepka, McIlroy for return at Memorial