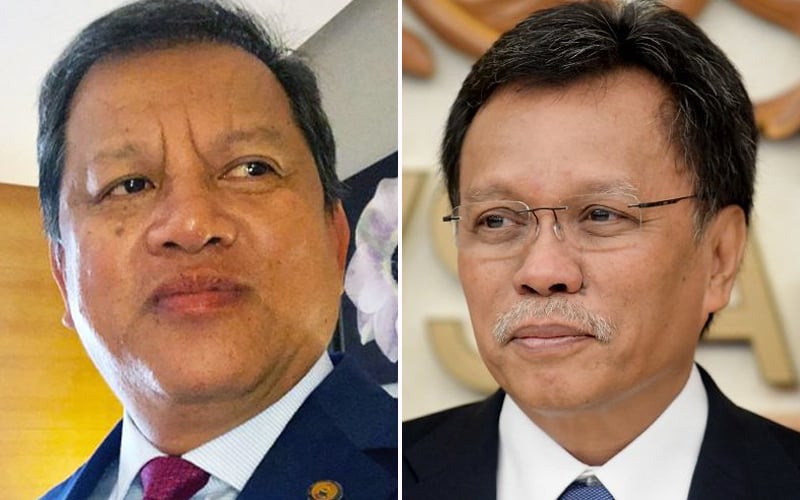 PBS information chief Joniston Bangkuai (left) says Shafie Apdal’s government is not only claiming credit for other people’s work but also taking the opportunity to run down these people.

He said land titles were awarded during a ceremony in Keningau on July 9.

He said the giving of such titles had been initiated by the previous government under the Sabah Native Land Services (Pantas) and communal grant programme, aimed at expediting the process of native customary right claims on land.

He said Warisan president Shafie Apdal, who is Sabah chief minister, should be embarrassed at officiating such programmes instead of implementing such projects himself.

“The presentation of land titles in Keningau and other districts recently, since Warisan came to power, is no different than the ribbon-cutting ceremonies the party leaders have held for many other similar BN-initiated projects,” Bangkuai said.

The Kiulu assemblyman said 21,378 land lots, covering an area of 36,137ha, involving 92 villages across Sabah, had been surveyed up until December 2017 by Pantas, established in 2011. It involved 80 teams and cost RM20 million.

“Hence, the Warisan-led government is once again misleading the people in claiming glory for the efforts of the previous government and its leaders.”

He said this was akin to the Malay proverb, “Lembu punya susu, sapi dapat nama” (someone else getting recognition for another person’s efforts).

Bangkuai also lambasted Shafie for using the handing-over of the land titles to discredit political rivals, the previous BN government and its leaders, claiming they had been ineffective, corrupt and had failed to assist the people when they were in power.

“In an attempt to score political brownie points, he not only claims credit for other people’s work but also takes the opportunity to run down these very same people.

“Shafie’s style of governing seems to be focused on blaming the previous government, belittling and hurling accusations against its leaders,” Bangkuai said.

In Romania, a special champion: everything was decided in the match, the format of which was chosen 3 hours before the whistle
Danny rose: I was stopped by the police last week: is This a stolen car? Where did you get it?. And this happens regularly
Barcelona refused to sell for 60 million euros Trinca u, bought from Braga for 31 million. The club count on him
Chelsea will compete with Everton for Regilon. Real Madrid is ready to sell him
Espanyol asked La Liga to cancel the flight. The Catalans have been in the relegation zone since the fifth round
Inter have not yet decided on Conte's future. Everything will be decided after the Europa League
Haji resigned as Viitorul's coach
Source https://www.freemalaysiatoday.com/category/nation/2020/07/11/warisan-claiming-credit-for-bn-efforts-claims-pbs/

Conte says he is committed to three-year project with Inter

Murray wants assurance on quarantine issues before US Open

Serie A season to kick off on Sept 19, a week later than planned

US teachers protest reopening of schools amid surging virus cases

US spells out changes for Boeing 737 MAX to fly again

India orders ‘full curfew’ in Kashmir ahead of clampdown anniversary

The toilet: The history of this underappreciated luxury

Why Dr M shouldn’t give advice on party-hopping

Check my bank accounts, says former Inanam rep over allegations that he was given millions to switch sides

It's a 'sham': Ex-1MDB CEO tells court of a deal to deceive board of directors

Warisan, allies should be allowed to defend their seats in coming Sabah polls, says Shafie

Thais ‘cast a spell’ for democracy in Harry Potter-theme protest

Cops nab Nepali over assault of countryman in park park

Russia aims to produce ‘millions’ of vaccine doses by 2021

Ministry of Transport: Rm20.37b paid for ECRL project as at July 13

Broadway musical on DaVinci’s ‘Salvator Mundi’ in the works

Thais upset about joint US military drills amid pandemic

Covid-19: Migrant workers among foreigners allowed into Thailand from tomorrow