A group that calls itself “Disciples of Jagaban” flooded the streets of the Federal Capital Territory on Sunday to campaign for Bola Ahmed... 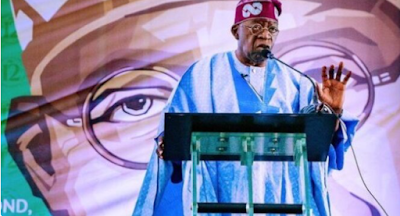 A group that calls itself “Disciples of Jagaban” flooded the streets of the Federal Capital Territory on Sunday to campaign for Bola Ahmed Tinubu.

The group were sighted, with colourful pictures of Tinubu and campaign posters, at areas which include highbrow Maitama District, the Central Business District.

They were also seen around the National Secretariat of the All Progressives Congress.

Some of the posters carried inscriptions such as “TinubuNe”, “Happy Democracy Day, Tinubu Advocates Group,” “Jagaban Nigeria” among others.

The group chorused that it was determined to drag Tinubu into the 2023 presidential race.

They said Tinubu was the most suited person to succeed Buhari.

The national president of the group, Abdulhakeem Alawuje, who spoke to reporters in Abuja, said, “The peace, love, unity, and harmony of this country has never been disturbed like this.

“All this is happening just for those crooked politicians to disorganize us, but unfortunately for them, we have gone far ahead of all their evil strategies.

“We are supporting Tinubu and calling on him, begging him, inviting him to contest the 2023 presidential election for the benefit of Nigeria and Nigerians.

“You can believe me that Tinubu has laboured so much for the development of this country. We all know how he laboured to give us President Muhammadu Buhari.

Without reform, Nigeria may be headed for a break-up

LG elections and administration in Nigeria

Nigeria back to the debt trap!

Yoruba monarchs yet to meet on agitation – Chair, Ekiti Obas

Nigeria must be protected against secessionists, says Wike

60% of funds stolen from Africa through private sector – ICPC

Naira slides to 505/$ as CBN stops forex sale to BDCs

Paris Hilton says she is not pregnant

Discontinuation of forex to BDC will affect exchange rate

Nigerians Search For Buhari In UK, As President Boycots Abuja House Over Protest

BBNaija Shine Ya Eye, Summer Olympics and more to watch this week on DStv, GOtv

Serie A: Ronaldo motivated for next season, says Allegri

ipNX recognised as Fiber Optic Broadband Service of the Year

What Sunday Igboho told court during hearing in Benin Republic

What I expect from Ronaldo next season at Juventus – Allegri

BBNaija S6: He has magic hands, Nini says as Saga massages her neck

Eritrean refugees in Tigray caught up in conflict