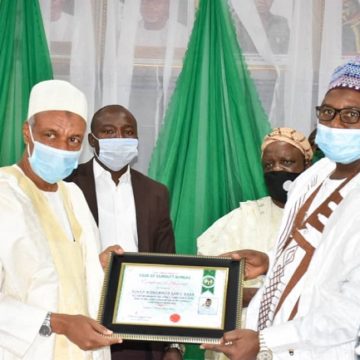 All public officers and top cadre civil servants in Bauchi State have been directed to immediately declare their assets in line with the provisions of the Code of Conduct Bureau to avoid running against the law.

The directive was given by the State Governor, Sen Bala Mohammed Abdulkadir, at the opening of a two-day workshop on strict compliance with assets declaration and Code of Conduct for public officers and career civil servants in the state held at Command Guests House, Bauchi.

Bala Mohammed pledged the readiness of the state government towards promoting zero tolerance for corruption, not only in the state civil service, but the whole of its operations to ensure effective service delivery to the citizenry.

The Governor also reiterated the resolve of his administration to continue to impart the culture of discipline and transparency in government affairs and declared interest to work with the Code of Conduct Bureau in its effort to entrench public probity and accountability in the system.

He said: “Let me commend the leadership of the Code of Conduct Bureau for this worthy partnership, aimed at enriching the culture of honesty, transparency and accountability in the management of our public institutions.”

The Governor added: “I note with appreciation that, this workshop is extended to instil in the minds of public office holders, career civil servants and private organisations, the virtues of probity and trustworthiness in the conduct of their assigned responsibilities.”

Bala Mohammed who was represented by the Secretary to the State Government, Alhaji Mohammed Sabiu Baba, stressed the need for all hands to be on deck so as to block leakages and ensure that, the little resources at the disposal of the state government are prudently managed.

“It is imperative to crave the indulgence of the general public the consequences for non-compliance with the provision of the Code of Conduct Bureau Act Cap C15 LFN 2004. As you all know, the power of the Code of Conduct under this Act is enormous and the public officers are encouraged to be on the side of the law,” he said.

The Governor who declared the workshop opened, charged the participants to participate actively in order to tap from the wealth of experience of the resource persons for better service delivery.

In a keynote address, the Speaker, Bauchi State House of Assembly, Abubakar Y Suleiman, commended Code of Conduct Bureau for ensuring zero tolerance for corruption in the country and assured of the Assembly’s support in order to achieve the set objectives.

Earlier, the Chairman, Code of Conduct Bureau, Professor Mohammed Isah, said the workshop was organised to educate the participants on the activities of the Bureau in order to ensure total compliance with its guidelines for the conduct of public officeholders.

Messi can be disqualified for 4 matches for hitting an Athletic player on the head
Ex-Juve and Bayern Munich defender Benatia moves to Parma
Hodgson on 0:4 with City: At half-time I did not think that Palace would lose big
Athletic forward Inaki Williams scored the most goals for Barcelona - 5 goals
Milan will give defender Conti Parma on loan with a mandatory buyout for 7 million euros
Koeman on the removal of Messi: I don't know how many times he was fouled. He tried to circle, but it didn't work
Marseille is close to renting Milik for 8+3.5 million euros for 1.5 years with the right to buy out
Source https://tribuneonlineng.com/bauchi-gov-directs-public-officers-top-civil-servants-to-declare-assets/

Biden aides: US presidential inauguration will be outdoors and safe

Lessons in Biden’s appointments of Nigerians

It determines what you become on the outside

5 ways you can help new managers to become better leaders

Review of Don Moore’s Perfectly Confident: How to Calibrate Your Decisions Wisely

Israel as the start-up nation