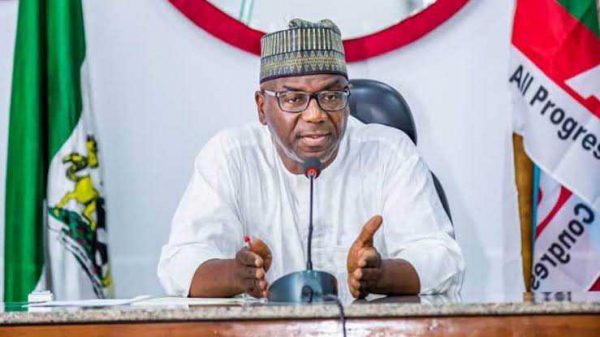 He also cautioned against the disparaging of the President for no just cause.

AbdulRazaq stated this in Ilorin, the Kwara state capital, at the distribution of Ramadan gift, tagged ‘Baba for all’ to the vulnerable, physically challenged, widows and less privileged across the 16 local government areas of the state on Tuesday.

He said, “Most of the All Progressives Congress (APC) governors rode on Buhari’s back to power. Even though we had our own ‘otoge’ in Kwara but he led the party amiably.

“So we are not going to sit and have people needlessly denigrate the leader of the country for no just reason. The man has been working.

“He has done exceedingly well and because he would not talk, the opposition is taking advantage of that to pull him and the country down. No, no patriot should allow that.

“When there was a lot of money in this country, it was mismanaged. But when baba came in, the money has dwindled. There is no money today but President Buhari has been able to manage that and he has been an effective manager of resources. What he has been doing is to manage the situation.

“The effect of COVID-19 has hit hard on global economy, not just Nigeria. It hit Nigeria very hard as the vast majority of us earn our wages daily. So the shutdown affected us more.

“No matter what they say about Baba Buhari, nobody has accused him of embezzling money. That is where it starts from. The man is prudent and diligent. He is making sure that things are done right in every sector.”

Nigeria may not celebrate another Democracy Day, says Soyinka

Governors to be blamed for Nigeria’s problems – Ita Enang

Impact of Covid-19 on online entertainment in Africa

Man With 39 Wives Dies In India

Umahi On Restructuring: Let’s Have Six Vice-Presidents, One From Each Region

Turmeric: side effects of over-consumption

We Did Not Issue A 72-Hour Ultimatum To Delta State, Says Miyetti Allah

It’s illegal for NASS to make law on grazing – Spokesman

Nigeria may break up in 2022, ECOWAS sets date for suit against FG | 5 Things That Should Matter Today

Buhari is a willing horse, Nigerians want to ride him to destruction – Chris Ngige

Nigeria needs leaders who will unite the country —Osinbajo

Nigeria may not celebrate another Democracy Day except… —Soyinka

5 streets in Lagos that NEVER sleep

Nigeria vs Twitter: Buhari has made Nigeria living hell for citizens – Cardinal Okogie

OPPORTUINITIES: Nigeria Should Be Innovators, Not Consumerist Spectators Of Cryptocurrency – Osunsanya

Reps want ‘state of the nation’ address compulsory for Presidents

Actor, Mofe Duncan reveals why being famous is a curse

BrandMed and AstraZeneca partnership - a commitment to patients

Letter to minstrels of war

I’m not retiring from politics like Masari –Ganduje – New Telegraph

We only suspended strike for 45 days —PASAN

3 things women do when they are cheating

Count me out of Sokoto gov race, says Dasuki