President Muhammadu Buhari on Tuesday night received in audience the Ooni of Ife, Oba Enitan Ogunwusi, in his official residence at the presidential villa, Abuja.

Details of the meeting have not been released. 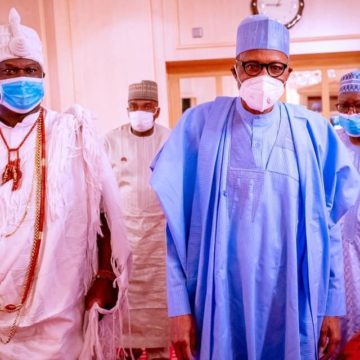 However, the foremost traditional ruler was said to have arrived the presidential villa at about 8.30pm for the meeting.

Also at present was the Chief of Staff to the President, Professor Ibrahim Gambari.

The surprise visit made on Friday night by the leaders of the ruling All Progressives Congress (APC) to former President Goodluck Jonathan at his residence in Abuja triggered a stir in the major political camps, resulting in at least four possible theories..Ooni of Ife hold talks

Ekiti PDP disowns Oyinlola’s reconciliation committee, says ‘We are not aware of any meeting’

Cleaner in court for allegedly stealing laptops worth N5.6m

COVID-19: We must not play politics with vaccines, Gbajabiamila warns

Buhari to New Service Chiefs: You have short time to deliver

QUIZ: How much do you love to sleep?

A test on me for COVID-19 came out positive but became negative after 72 hours, says Obasanjo

‘Zamfara No-fly-zone’ is an indication that Nigeria is at war – Iba Adams, Yoruba Leaders

Family of 7 nabbed for kidnapping in Ogun

Sowore under fire over RevolutionNow’s call for Buhari’s resignation

Army hands over arrested robbery suspects to police in Calabar

DJ Cuppy gets into Oxford university for master’s degree

FRAPAPA set to change the betting outlook in Nigeria

Two Nigerians to die by hanging in Ghana for kidnapping, killing four girls

Biden appoints another Nigerian as director of global health resources

Police arrest family of 7 who specializes in kidnapping in Ogun

NDLEA seized N60bn worth of narcotic drugs in 6 weeks — Marwa

Di Maria, Verratti return for PSG ahead of Barca tie

COVID-19 vaccination: We must rally behind government to fight unseen enemy ― Gbajabiamila

Buhari to Service Chiefs: You have few weeks to restore security

Oja Oba Market, Oja Tuntun Market, and Kunlende Market… Check out the top 10 most prominent markets in Ilorin | From The Masterlist

Okowa felicitates with Obasanjo at 84

Two herdsmen remanded over killing of farmer in Ondo

CAN urges Oyo Govt to be proactive in tackling insecurity