Ole Gunnar Solskjaer’s side have been handed a tough draw on their return to the competition, with Turkey’s Istanbul Basaksehir the final side in their group.

Liverpool also face a difficult task, with Dutch champions Ajax and last season’s quarter-finalists Atalanta joining them in Group D along with Midtjylland.

AT LAST: Reps Back Down On Controversial Water Resources Bill

Holders Bayern Munich play Atletico Madrid in Group A, while Juventus’ and Barcelona meet in the blockbuster tie in Group G that sees Ronaldo face Messi for the first time since he left Real Madrid.

The draw, which also saw Real Madrid and Inter Milan paired in Group B, was switched to a behind-closed-doors event in Geneva due to the ongoing coronavirus pandemic.

UEFA said hosting the event in its original venue in the Greek capital Athens would “violate public health restrictions and constraints regarding indoor events” in the country. 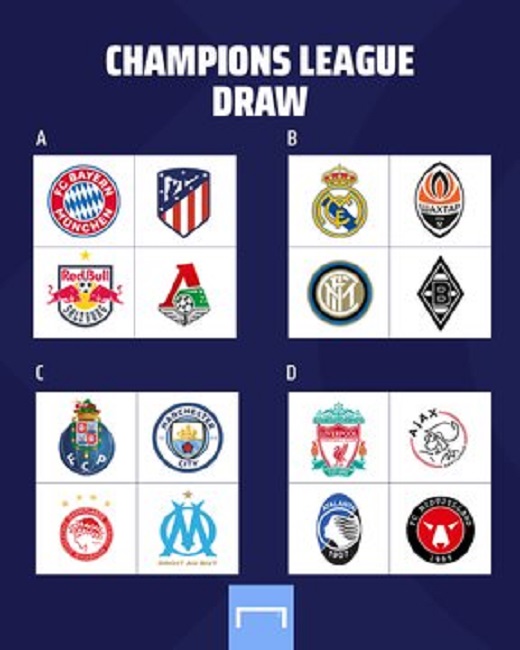 “It’s really nice. In the Champions League you play against the best players in world and I want to compete with them,” the Belgium international said in a broadcast on the UEFA website.

When does the football start?

The group stages get underway in the week of October 19, with six rounds of group games running through to mid-December.

Whoever is lucky enough to go all the way will go head to head at the Ataturk Olympic Stadium in Istanbul – where Liverpool beat AC Milan back in 2005 – on May 29.

Barcelona are concerned about the shape of the Target. The club believes that he did not work enough on vacation
Laporte was supported by van Dyck: Sorry, bro. No joy, even though we are rivals
Lautaro Martinez: Messi is the best in the world. He is always one step ahead of the rest
The Atletico stadium was painted pink as part of the campaign to fight breast cancer
Frank Lampard: nothing comes easy in the Champions League. This is a great platform to learn new things
Ronaldo was not included in the Juve bid for the match against Dynamo Kyiv
Bruno on the role of captain: I didn't expect it. Tomorrow it's not about me, it's about the team. Everyone should be a leader
Source https://tribuneonlineng.com/c-ronaldo-meets-messi-man-utd-face-psg-as-uefa-makes-champions-league-draw/

SWAT: Beyond change of name

Adepeju: Yet another gang rape

My mother ‘ll be buried first week in December – Makinde

INEC job and the risk element

#EndSARS: Ooni Of Ife Calls For End To Protests As Obasanjo Urges President Buhari To Listen To Demonstrators

#ENDSARS: Protesters Escape Attack By Thugs In Abuja, Apprehend, Hand Them Over To Police