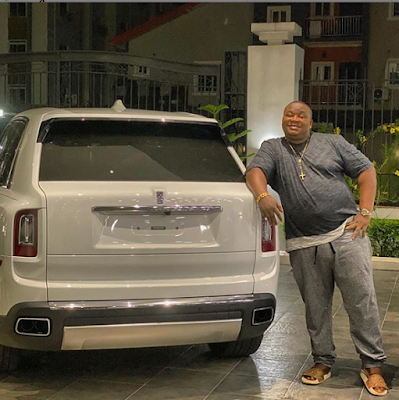 Okechukwu, known for his lavish lifestyle, arrived at the Force Headquarters Annex, Lagos, around 10am and was detained afterwards.

The Instagram celebrity, it was learnt, was invited for alleged misuse of police escorts and weapons as well as unexplained wealth.

A top police source said the investigation was sequel to an order from the Office of the Inspector-General of Police who had expressed shock over the abuse of police personnel.


He said, “We have detained Cubana Chief Priest and he is facing interrogation for misuse of police personnel as well as the illegal use of a weapon and his extravagant and unexplained lifestyle.”

Cubana Chief Priest is known to post pictures of himself in private jets and exotic cars to impress his 1.6 million followers on Instagram.

Inter want to extend Sanchez's lease and are willing to pay extra for him to Manchester United if the clubs play in the Europa League final
Don't talk behind our backs, go out on the field and fight with us. Pep's possible appeal to Jose, Klopp and the world
Robertson Pro 1:2 with Arsenal: the Result is disappointing. But next week, the 30-year wait will end!
Bruno Fernandes: Ronaldo is the most technical player I have seen
Solskjaer on Chelsea: They have 48 hours more rest before the Cup semi-final. It's not fair
Bayer wants about 100 million euros for Havertz. He will not be released until the end of the Europa League draw
Manchester City presented their home form for the 2020/21 season. It has a white pattern
Source http://www.nigerianeye.com/2020/06/club-owner-cubana-chief-priest-detained.html?utm_source=feedburner&utm_medium=feed&utm_campaign=Feed%3A+Nigerianeye+%28NigerianEye%29

Crystal palace vs Manchester United: How Solskjaer’s side could line up against Hodgson’s men

400 corps members pass out in Borno in low-key ceremony

I have no confidence in Reps Committee – NDDC boss, Pondei

France to require masks in indoor public spaces from next week

Governor Matawalle did not donate to university in Jigawa — Official

N81.5bn probe: NDDC boss, others walk out on Reps

Cardi B Slams Those Criticizing Offset Over Expensive Gift For Kulture

Magu: I Was Shocked When I Read The ‘Nonsense’ Allegations Against Me

Governor Wike is a man – Ex-NDDC boss, Nunieh recounts her rescue from police

NBA must fight for public cause ― Falana, Belgore, Odinkalu

Glo Slashes Cost Of International Calls By Up To 55%

EFCC: Not Yet The End Of History

Guyana: US announces visa sanctions, calls President to step aside

World population in 2100 could be 2 billion below UN projections

In Nigeria, African researchers blaze a trail in virus fight