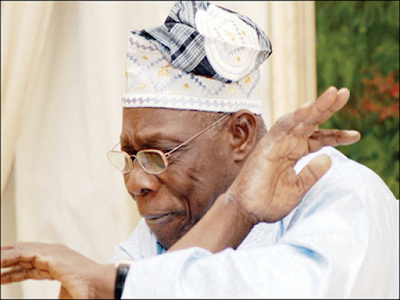 The move was in ex-President’s strict enforcement of the Covid-19 protocols regarding safe physical distance and minimum number of persons permissible in an enclosed space.

At the St. Peter’s Anglican Church (Church of Nigeria Anglican Communion) Diocese of Remo, Isara Remo, Ogun State venue of the Order of Service for the remains of his mother in-law, Mrs Florence Mopelola Adenekan, Obasanjo manned the church’s enhance door and ensured that the approved limit of those to be allowed in was strictly adhered to.

The former President ordered many of the mourners who wanted to be part of the funeral service to go back and personally shut the Church doors against them as the service presided over by the Archbishop of Lagos Ecclesiastical Province of Lagos and Bishop of Remo Diocese, Most Rev Dr Matthew Olusina Fape, commenced at about 10.30 am.

Some of the elder statesman’s close aides and associates were not spared – they too were also locked outside despite having their face masks on.

The late Mrs Adenekan was the mother of Chief (Mrs) Bola Obasanjo. She died on April 17, 2020; two days before her 90th birthday.

The nonagenarian was interred at the church cemetery located behind the church with Obasanjo leading the family of his in-laws to perform the dust-to-dust rites.

Mrs Obasanjo was absent at the ceremony, as she was said to have travelled to the United Kingdom (UK) and could not make it.

The former President later paid homage to the four traditional rulers at Ode and Isara communities in company with his Special Assistant on Media, Kehinde Akinyemi, among others.

Oba Osho said Obasanjo had demonstrated “how true and respected Yoruba son he is by visiting their domains despite coming on personal engagement to the area.

“We shall continue to learn from your wisdom. The entire people of Ode is proud and appreciate this visit,” the traditional ruler said.

Manchester City wants to buy 5 more players this summer. The club is Interested in Lautaro and Felix
West ham midfielder Antonio is the best player in the Premier League in July. He scored 8 goals in 7 matches
Brih is scheduled for the Manchester City – Real Madrid match. Zweier will judge the Juventus-Lyon game
Fulham returned to the Premier League, earned 135 million pounds and destroyed the fairytale of Brentford. Everything was decided by the trick of the defender and a stupid mistake of the goalkeeper
Fabinho: this Liverpool will be remembered forever. The title in the Premier League is special, because we had to wait so long
Tuchel asked PSG to buy Alaba from Bayern. The player wanted to receive 20+ million euros a year
Messi-Casillas: you are an incredible goalkeeper. It was a beautiful rivalry that made you overcome yourself
Source http://www.nigerianeye.com/2020/07/covid-19-obasanjo-locks-out-aides.html?utm_source=feedburner&utm_medium=feed&utm_campaign=Feed%3A+Nigerianeye+%28NigerianEye%29

COVID-19 virus has not been detected in breastmilk – WHO

COVID-19: Buhari govt warns of another shutdown, spread of coronavirus

2023: How Gov El-Rufai dragged me into presidency race – Bamgbose

NBS And The Sokoto Poverty Index

Adamu @ 74: Portrait Of A Bridge Builder

Djokovic, Nadal, Serena Sign Up For US Open Tournament

Dealing with fear and stigma during the Covid-19 Pandemic

With the new fine on ‘hate speech,’ how will the media report the #RevolutionNow protests?

WHO Speaks On Risk Of Transmitting COVID-19 Through Breastfeeding

Joseph Prince Daily Grace Inspiration: What Have You Been Saying?

Ibadan no more dirtiest in Africa

Kalibata named among 100 Most Reputable Africans of 2020

Celebrities Pour Encomiums On Daddy Showkey As He Clocks 50

As we debate the NDDC and Magu, let’s remember Abdulrasheed Maina

Mai Mala Buni: A Leader So Loved By His People

US rapper killed in ‘drive-by shooting’

S’West govs, Tinubu, others pay tribute, as Pa Fasanmi is laid to rest

PPMC fixes ex-depot price of petrol at N138.62 per litre

Ondo 2020: How Jegede ran to Mimiko for reconciliation, support