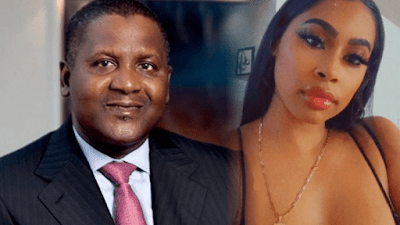 Autumn, through her Instagram account @Allarounda1, had shared a video of herself and the richest African man on a couch draped in an orange blanket fiddling with his mobile phone with his buttocks clearly exposed.

She also posted pictures of Mr. Dangote alighting from a luxury plane in a private hanger, describing herself repeatedly as a ‘ForbesListSugarBabe’ in an apparent reference to her lover’s status amongst an elite list of world’s billionaires.

The raunchy images were later deleted by the woman, claiming she had been flooded with requests from bloggers to comment further on her affairs with Mr. Dangote.

She also rejected claims that she took her affairs with Mr. Dangote to social media to chase undue fame.

In follow up updates, she said she was trying to clean Mr. Dangote’s name from the mess earlier created by Bea Lewis, who described herself as a restaurant operator in the United States.

However, Mr Dangote, in the lawsuit filed in an American court in Miami, Florida, sought compensation of $30,000 with the claim that his reputation was battered by the “ForbesListSugarBabe.”

Meanwhile, Autum Spikes took to her Instagram account and threatened Mr. Dangote that he had taken the wrong turn by making the case public.

Autumn also noted that Mr. Dangote had offered to pay her for her silence, an arrangement she rejected before the billionaire filed the suit.

“Aliko is suing me for declining his silence money.. How petty of him and his legal team,” she wrote.

She said the pair had been in a relationship for nine years without a non-disclosure agreement to gag her from publicly commenting on the affair.

Mr. Dangote’s lifestyle has been largely kept from the public until now. Little was known about him beyond his marriage and divorce in the past.

However, Dangote’s media aides are yet to comment on the scandalous affairs that seemed to be pointing at the billionaire’s steep appetite for glowing American women.

People should be allowed to discuss Nigeria’s future —Shawulu

‘Broken from seeing this’ | The Daily Vulnerable

How beers and Vikings gave Bluetooth technology its name

In Iraq, Pope reaches out to top Shiite cleric

Nigerians must fight the anti-terrorism war as one

ACF expresses concern over stoppage of food supply to South

Man to die by hanging for beheading two-year-old boy

Research works on cocoa, livestock, others already in farms ― ARCN

Court sentences labourer to death by hanging in Ogun

Ogun: Man to die by hanging for beheading two-year-old boy

No cause for the alarm over rising food prices, Lagos assures residents

Ezekwesili: Without Fixing Politics, We Can’t Have Good Governance

Burna Boy to perform at 2021 Grammys

What you need to know about a ‘No-fly zone’

Stick to sports – Ibrahimovic hits out at LeBron James again

BREAKING: Over 50 kidnapped by suspected bandits in Niger

Over 50 kidnapped by suspected bandits in Niger

Many killed in multiple attacks by suspected bandits in Kaduna communities

Zamfara: Gov Matawalle told to reveal identities of those behind kidnapping

ACF To Matawalle: Reveal Abductors Of Jangebe Students Or Be Treated As An Accomplice

Trial of Sowore, others adjourned to May 7 as ‘babalawo’ storms court in solidarity

Femi Adesina: A Witness In The Court Of Posterity By Dr Bolaji O. Akinyemi