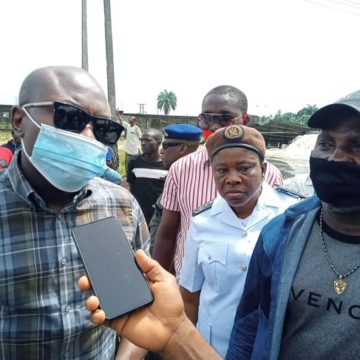 With a payloader, officials of Warri South Local Government Area Taskforce on Beautification and the Delta State Taskforce on Environment, on Monday, commenced the demolition of shanties and caravans illegally constructed along major roads and streets of Warri, in the local government area.

Chairman of Warri South Local Government Area, Dr Michael Tidi, who was also on the ground to supervise the exercise, assured that there would be strict monitoring to prevent re-erection of the shanties and caravans.

He said his administration has doubled its efforts to rid Warri of illegal structures, with a view to improving the aesthetics of the oil city and ultimately attract genuine local as well as external investors.

Dr Tidi stated that the demolition of illegal structures under the flyover connecting Ogunu and Ugbuwangue communities was done after a well-thought-out plan, so as to clear the place of criminal elements, who trade and consume illicit drugs under the flyover.

Chairman of the State Taskforce on Environment, Evangelist Sylvester Oromoni, dismissed the claim by some owners of the demolished structures that they were not given notice.

He said adequate prior information was given by both the State Taskforce on Environment and the Warri South Council Taskforce on Beautification before the exercise commenced. 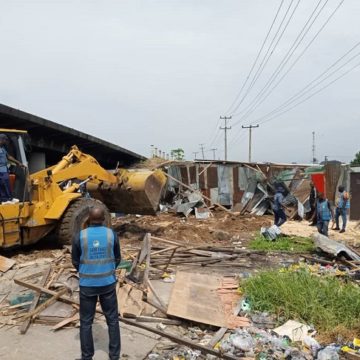 Vice-Chairman of Warri South Council Taskforce on Beautification, Hon Mavis Onojeghwho, opined that owners of the demolished caravans and shanties, who claimed they were not informed, thought the prior notice would not be backed by action from the state and local governments.

While declaring that every illegal structure in Warri will be brought down for the benefit of everyone, Hon Onojeghwho, averred that there was no going back in the resolve to make Warri tidy.

The demolition exercise will continue Tuesday, April 13, with Okumagba Avenue as the take-off point.

It will be recalled that Warri South chair, Dr Tidi, during his build-up to his second tenure assured of his determination to rid the oil city of filth and illegal structures as his top priority.

Easy steps to retrieve your NIN on ALAT

Some bandits are foreigners – Afaka student gives reason behind abduction

2021 Prophecy: Prophet Jeremiah reveals the chosen men to lead Nigeria out of trouble

If My Child Is Abducted, I Will Lock Aso Rock — Gumi

Emmanuel Onwubiko: Bring back our Nigeria

The nexus between Hadiza, Tinubu and Pantami

Highly Placed Nigerians To Be Prosecuted For Financing Terrorism — Malami

Between soccer and Teslim ‘Thunder’ Balogun

Teslim ‘Thunder’ Balogun: What Nigerians never knew about him, exploits home and abroad

After shedding so much blood, losing our people, farmlands Benue youths resolve to fight back

My 17-yr-old wife ran away 5 days after we got married, 51-yr-old man tells court

From Sita to Arlington Resa – Is FAAN “Born Again”?

‘I discovered my wife is mentally ill after she stripped naked, destroyed my property when we got married’

Tales of homeless Lagos youths: Hustle in the day, rob at night

Our Olympus is falling: Who can rouse the General?

Taking the bull by the horn: IGP Alkali vows to improve public safety

Immunity after a covid infection?

Are you in your spouse’s life?

What are the benefits of walking

Why I featured Tribemark in my new album- Eddy Kenzo

Davido celebrates 10 years in music •Gets dedicated emoji on Twitter

Catholic bishops call for summit on restructuring, devolution of power

Two abducted as another war brews between Aguleri, Umueri

Troops kill one bandit, several others escape with bullet wounds in Kaduna

Insecurity: Wike says El-Rufai is reaping from evils he plotted against others

Insecurity: Wike says El-Rufai is reaping from evil he plotted against others

Who is Ann Winblad: Bill Gates’ ex-girlfriend who Melinda allowed him to jet off with annually

Students’ welfare will be my priority, says FUOYE VC