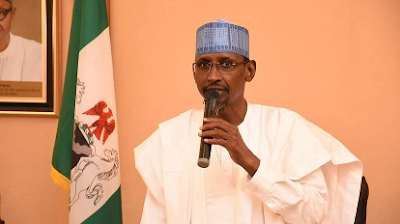 The FCT Minister, Muhammad Bello has ordered the arrest and prosecution of the people who broke the FCT warehouse in Gwagwalada Area Council and looted the food items in the store.

Bello gave the order during an emergency security meeting with leaders of various security agencies in the city, on Monday in Abuja.

Recall that suspected hoodlums on Monday looted a warehouse in Gwagwalada area of the Federal Capital Territory, FCT.

The warehouse is located along the Secretariat road in Gwagwalada.

Reacting, the minister, who asked those who looted the food items to return them immediately, disclosed that there would also be massive deployment of security agencies to safeguard factories and warehouses in Idu Industrial District of the city.

”What is going on is no longer End SARS protest but broad day stealing by hoodlums,” NAN quoted him as saying.

Pep on Aguero's reaction to Maradona's death: it's difficult, especially for his son. Sad situation for the family
Pogba and Mctominay will not play with Southampton due to injuries
Jurgen Klopp: Maradona is the best player in my life. Meeting him was like meeting the Pope
Chalhanoglu will move to Manchester United as a free agent in the summer of 2021 (Christian Falk)
Benzema, Carvajal, Ramos and Valverde will not play with Alaves due to injuries
Ronaldo will not play against Benevento. Pirlo gave him a rest
Zidane on Real Madrid's downturns: Stability in football is the hardest thing to achieve. The problem is not in relation
Source https://www.nigerianeye.com/2020/10/endsars-fct-minister-orders-arrest.html?utm_source=feedburner&utm_medium=feed&utm_campaign=Feed%3A+Nigerianeye+%28NigerianEye%29