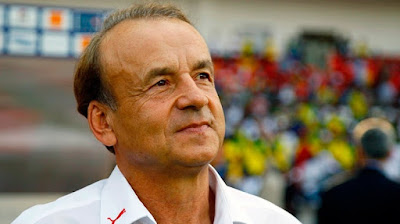 Nigeria coach Gernot Rohr will sign a new contract next week after agreeing on terms to extend his four-year stay with one of Africa’s football powerhouses, the national football body said Tuesday.

During the new two-year contract, Rohr will be expected to lead Nigeria to qualification for a seventh World Cup finals and the 2021 Africa Cup of Nations in Cameroon.

“The executive committee mandated the general secretary to liaise with Super Eagles technical adviser, Gernot Rohr, with a view to concluding all matters around his new contract within the next one week,” the Nigeria Football Federation said in a statement in Abuja.

Rohr, 66, has been in charge of the three-time African champions since 2016.

The former Niger and Gabon coach-led Nigeria to the 2018 World Cup in Russia and the 2019 Africa Cup of Nations staged in Egypt, where the team placed third.

Top officials have insisted on inserting new provisions in the contract such as paying Rohr in local currency as against his current 45,000 euro ($49,000) monthly salary.

He is also expected to spend more time living in Nigeria.

The Franco-German national has been credited with assembling a young team made up of players who had previously represented their adopted countries at age-group levels.

However, his critics argued that he has continued to overlook players from the domestic league in his squad.

Rohr’s defence is that Nigeria’s best players are based in Europe.

Кад Cadiz returned to La Liga after 14 years
Pioli about 2:2 with Napoli: One point is a good result
Gattuso on Milan's penalty: the Rule needs to change. Jumping with your hands behind your back is another sport
Milan will offer 25 million euros for Celtic defender Ayer
Klopp on plans: Four years at Liverpool. After that, I want to do nothing for a year
Rogers Pro 1:4 with Bournemouth: Leicester play well only 45 minutes after the break
Inter and Roma are Interested in Garay
Source http://www.nigerianeye.com/2020/05/gernot-rohr-sets-to-sign-new-contract.html?utm_source=feedburner&utm_medium=feed&utm_campaign=Feed%3A+Nigerianeye+%28NigerianEye%29

Experts Warn Against Impact Of Naira Devaluation On 2020 Budget

EPL: Brendan Rodgers explains why he substituted Iheanacho in Leicester 4-1 loss to Bournemouth

Fourth night of mass protests against corruption in Bulgaria

US records another 60,000 new coronavirus cases in 24 hours

Nigeria gets medical equipment from ECOWAS to fight COVID-19

You must not enrol for WAEC without FG’s participation, NUT, NAPTAN tell states

Post COVID-19: Taxation, a must for survival of nation’s economy, not oil — Commissioner

ABCON calls on FG to suspend all increases in taxes, tariffs

The misnomer in use of interim applications

Lawmakers and the imperative of nation building

Agenda 2050: A new thinking with citizen participation and inclusion

Joints, disjoints and dislocations in the Buhari government

2 Women Tested Positive For COVID-19 Give Birth In Rivers

356 Soldiers In North-East Resign… And Their Reason Is Heartbreaking

Tottenham vs Arsenal: Arteta apologises to Gunners players after 2-1 loss

EPL: Mourinho gives reason next season will be different for Tottenham

EPL: Mourinho speaks on Tottenham finishing above Arsenal after 2-1 win

Reps quiz NDDC over non-execution of projects by 1, 773 contractors