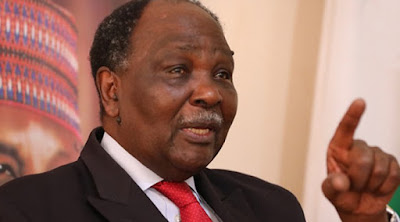 Aformer military Head of State, retired General Yakubu Gowon has described the allegations levelled against him by a United Kingdom parliament member, Tom Tugendhat that he stole half of Nigeria’s money stocked in the Central Bank of Nigeria (CBN) during his regime as “mere rubbish fallacy”.

General Gowon, who told the BBC News Pidgin that he served Nigeria with utmost fear of God adding that his legacies were visible to everyone.

“What the MP said was just mere ridicule and I don’t know as to where he cooked up such statement. I served Nigeria as much as I could and my achievements during those years are available to everyone,” he said.

He, however, promised not to engage in any form of argument over the matter as people who knew him very well would speak in his defence.

“I don’t want to talk over the matter since those who know me very well say that the MP’s statement is nothing but a mere fallacy,” he added.

On Tuesday, British MPs passed a vote for UK’s government to sanction some Nigerian government officials were involved in brutalising EndSARS protesters.

While debating, Mr Tugendhat alleged that bribery and corruption were the causes of Nigeria’s underdevelopment, citing an example that Gen. Gowon stole more than half of country’s worth in its central bank and stashed the sum in London when he was toppled.

Gen. Gowon ruled Nigeria from 1966 to 1975 before his government was overthrown while he was away from Nigeria.

Bruno picked up 4 Player of the Month awards in 2020. Ronaldo, Henry and Lampard had the same number-but for a career in the Premier League
Lev - the best coach of the decade in the national teams, Deschamps-2nd, Shevchenko-17th (IFFHS)
Head of the Premier League: We ask players not to hug and change their behavior
Milan had rented the midfielder, Torino Meite until end of season with option to buy
Ramos played on painkillers with Athletic due to knee problems
Barcelona's presidential election is scheduled to take place on March 7
Sir Alex Ferguson: Fortunately, I was retired when I watched Liverpool play in the last two years
Source https://www.nigerianeye.com/2020/11/gowon-denies-looting-cbn-says-i-served.html?utm_source=feedburner&utm_medium=feed&utm_campaign=Feed%3A+Nigerianeye+%28NigerianEye%29

Why Nigeria is unable to curb corruption – Lawyers

How I became prominent in Nollywood in just 7 years —Actor, Bolanle Ninalowo

As Museveni dips into more ignominy

Justice Akintan: An iroko that never forgets his roots

Problem of ASUU and the way forward

That Okorocha’s 2023 message to Wike!

Ibadan: The many firsts of an ancient city

The #YNaijaCover: The ‘Pigeons have come home to roost’ | #ArmedForcesRemembranceDay2021

Some Nigerians Don’t Pray For Their Soldiers, They Only Wail — Femi Adesina

Policeman Beat Me Up, Seized My Phone After I Asked To Sit Beside Him In A Bus —Deacon

NPA expects 19 ships with petroleum products, others at Lagos port