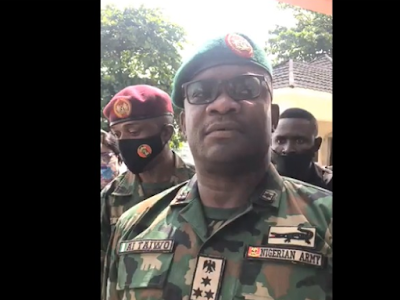 A military official identified as Brigadier General AI Taiwo on Friday told members of the Lagos State Judicial Panel of Inquiry probing the Lekki shootings that the Military Hospital morgue has been under renovation since October 2019.

Taiwo made this known this afternoon when the panel members paid an unscheduled visit to the military hospital in the Ikoyi area of the state.

After initial resistance by the soldiers, which lasted for about 30 minutes, the panel members were allowed on the hospital premises.

The brigadier general and other soldiers took members of the panel led by the chairman, Retired Justice Doris Okwuobi, to the morgue in the hospital.

Our correspondent observed that there was renovation ongoing in the facility.

Asked if there was a functional morgue in the hospital, Taiwo said, “This place has been under renovation since October last year.”

The chairman of the panel, however, thanked Taiwo and his men for their cooperation.

Earlier, a member of the panel, Ebun-Olu Adegboruwa, SAN, said the mission of the panel was to inspect the mortuary of the hospital.

He said the panel got a tip-off that prompted the unscheduled visit.

Addressing journalists, Adegboruwa said, “We got information impromptu, we could not give them notice because of the importance of what we want to do; it is an investigation. So, if we give information ahead of time that may jeopardise the essence of the investigation.

“We are exercising our mandate on behalf of the governor of Lagos State under the tribunals of inquiry law.

“We have already inspected the Lekki toll gate today and we decided to pay an unscheduled visit to the mortuary of the Military Hospital because we have confidential information concerning certain events that took place in the hospital here.

“We don’t want to make any conclusions yet until we have access to that mortuary to inspect it.

“We have a pathologist with us who is here to help us conduct medical examination of bodies that we may find in the mortuary.”

At least 30 youths were injured when uniformed men opened fire on #EndSARS protesters at the Lekki toll gate on October 20, 2020.

Eyewitnesses also said about seven persons died in the attack which has been widely condemned locally and internationally.

Barcelona are thinking about signing Garay due to Pique's injury
Pepe apologized for the red in the match with Leeds: there is no excuse for My behavior. I am deeply sorry
Manchester City have prepared a 10-year plan for Messi. After finishing his career, they want to make him an Ambassador for the club (The Times)
A Preston player who twice touched an opponent's genitals can be disqualified for 3 matches
Griezmann about his childhood: I tried to get into 10 clubs in France, but no one gave me a chance
Austin Matthew McConaughey (co-owner) is preparing for MLS: all season tickets have been sold, although there are only 2 players in the team, and the stadium (for $240 million) is still under construction
Lineker on Liverpool: Huge praise for Klopp's spectacular performance despite injuries
Source https://www.nigerianeye.com/2020/10/lekki-shootings-lagos-military-morgue.html?utm_source=feedburner&utm_medium=feed&utm_campaign=Feed%3A+Nigerianeye+%28NigerianEye%29

2023: It Is South East’s Turn To Be President – Ebonyi PDP Elders

5 Myths You Shouldn’t Believe About Trivia Board Games

Buhari Should Work On Security – PDP

How to beat the casino

2023: APC has not shut out any geopolitical zone – PGF boss

The exploits of Dr. Onyema Ogbuagu is another reason why the FG must strive to keep the country’s best brains

2023: Buhari should be wary of people trying to market Tinubu ― Bode George

#AlbumReview: Qdot takes us to the culture years with ‘Alagbe’

How Nigeria will exit recession, by FG

UK Debates Sanction For Nigeria Over Handling Of #EndSARS

IGP Promotes 16 Officers Killed By Hoodlums During EndSARS Protest, 82,763 Others

US rescue mission in Nigeria

The intelligence community and the new challenges (2)