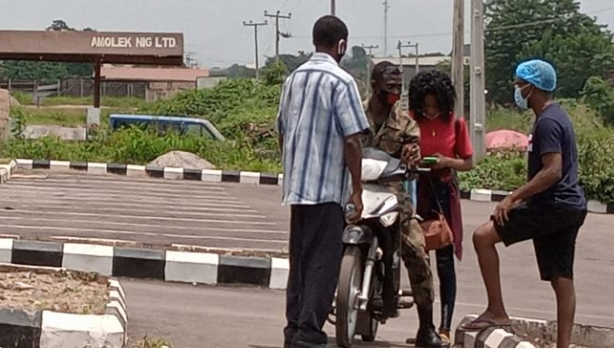 There was a mild drama at the Oyo state Infectious Disease Center on Saturday when a young woman refused to follow her father home after she was discharged from the isolation centre, TheCable reports

The graduate of statistics from a school in the state was among the 20 people discharged from the centre after they were treated for COVID-19.

When  the isolation centre which is located in Olodo area of Ibadan was visited, relatives of those who were to be discharged were outside the gate waiting anxiously for their loved ones.

An official of the centre, who preferred anonymity,disclosed that the patients were allowed to go home after testing negative for coronavirus.

“They were here for different duration of time. Some of them had spent more than four weeks at the centre receiving treatment. They were discharged after our medical team that they had tested negative for the virus,” he said.

Among those waiting for their loved ones was a pastor who is the father of the young woman.

He said that his daughter began exhibiting a wayward attitude after graduating from school.

“She is my second child but after her graduation from the school of statistics, she refused to come home. I only got to know that she had been isolated at the centre through a relative she confided in. I am a man of God and I will continue to pray for her,” he said.

The drama began after the young woman opted to follow a soldier who came to pick her with a motorcycle.

The father approached the soldier but after about five minutes of discussion, the lady was taken away on the motorcycle while her father left the centre in annoyance.

It was gathered that the soldier was admitted to the isolation centre but got discharged after recovering from the disease.

“The soldier the girl followed home was one the the three soldiers at the isolation centre when the girl was on admission,” a discharged patient who did not want to be names said.

“Before the soldier was discharged, he and the girl were very close. They mingled together.”

Among those discharged were aged men and women, and a student of the University of Ibadan.

Some of the discharged patients said that they were happy to reunite with their families after receiving a clean bill of health.

Andrea Pirlo: it is Unlikely that Suarez will become a Juventus forward
Suarez and Vidal are not in Barca's bid for the third match in a row
Fernando Torres on Liverpool: It was magical. It seemed like I could fly
Kahn on 8:0 with Schalke: Bayern showed the same game as last season
Liverpool unexpectedly took another Jota from Wolves for 41 million pounds. He is unstable, but won the Champions League and the Europa League (in Football manager)
Ancelotti on Tiago at Liverpool: he picked the wrong team. My heart is broken
Leroy Sane on 8:0 with Schalke: Bayern are hungry, although the boys have already won the treble
Source https://www.nigerianeye.com/2020/08/love-at-isolation-centre-discharged.html?utm_source=feedburner&utm_medium=feed&utm_campaign=Feed%3A+Nigerianeye+%28NigerianEye%29

Man, 91 leads protest to Obiano over trouble in Anambra community

#EdoDecides: Soldier threatens to slap anyone who asks him to settle dispute at polling unit

‘No Matter How Touching Your Story Is, I Won’t Send You Money’ – Omashola Notifies Fans

I’ll slap anyone who asks me to settle a dispute, ‘hungry’ soldier charges at Edo voters

Noble Igwe seals ambassadorial deal with ‘Wear It All Luxury’

One killed as gunmen invade relaxation spot in Kogi

FG’s response to UK, US on visa ban and asset seizure is spot on, but…

ONE CHINA POLICY: Chinese military flies 18 warplanes near Taiwan during US envoy’s visit

Arsenal vs West Ham: Lyon give update on Aouar’s move to the Gunners

#BBNaija: I can’t stay one week without you – Nengi tells Ozo (video)

#BBNaija: “After you have $ex with Neo, you’ll know if the relationship will work or not” – Laycon advises Vee

#BBNaija: “We just want to make sure you don’t get that third strike. So, apply sense” – Vee warns Ozo after he wanted to share the luxury lounge with Nengi

I don’t joke with my $ex toys. I will use them instead of having sex on TV – Nkechi Blessing

#BBNaija: ‘I may run for president in future’ – Prince reveals desire to join politics

Kanayo O. Kanayo is grateful for a successful surgery

Cardi B explains why she filed for divorce from Offset, says ‘sometimes people really do grow apart’ (video)

Cardi B explains why she filed for divorce from Offset

FUOYE pledges to appoint VC, others based on merit

1 Dead, Many Injured As Gunmen Open Fire In Relaxation Spot In Kogi

#EdoDecides: I expected INEC would have prepared better for this election ― Obaseki grumbles