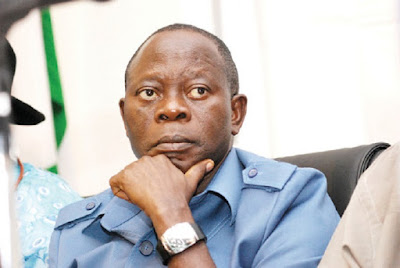 Hundreds of protesters have stormed the national headquarters of the All Progressives Congress to demand the sack of the National Chairman, Adams Oshiomhole.

The protesters, who said they were members of the APC Young Stakeholders (Forum), stormed the party headquarters as early as 11am with various placards with inscriptions such as: “Oshiomhole Must Go”, “Oshiomhole go home”, “We are tired of losing”, and “Enough is Enough.”

A leader of the protesters, Mathias Omikpa, said the APC young stakeholders were tired of reversals of the party’s victories on account of the tardiness of the party chairman.

He said, “It is time for Oshiomhole to go, we are tired of this downward trend. The national chairman has brought nothing but misfortunes to our party from Zamfara to Rivers now Bayelsa. We are calling on the President, (Major General) Muhammadu Buhari (retd.), and the National Leader, Asiwaju Ahmed Tinubu, to intervene.

“The action of this chairman has reduced the gains of our great party before he became chairman, our party controlled 24 states we are now down to 18 only God knows how many more states we will lose if he remains as chairman within the next one year.”

The protesters sang anti-Oshiomhole songs and conducted themselves peacefully as a combined team of security staff of the APC, regular policemen and officials of the Nigeria Security and Civil Defence Corps watched from a safe distance.

Another member of the group, Genesis Johnson, expressed disappointment with the party’s “sure slide into the abyss.”

Johnson said, “Look at what happened in Bayelsa State, it was caused by Oshiomhole and we say enough is enough. We want him to park his load and leave that office. He is not the only Nigerian that can manage that office.

“Since he came into office, he has been creating problems for this party. We will suffer to win election and at the end of the day opposition will go to court and collect the state.”

Attempts to get a reaction from Oshiomhole’s media aide were unsuccessful as of the time of filing this report. Calls to his mobile phone were neither picked nor returned.

Taraba shuts borders, bans movement in, out over COVID-19

Coronavirus pandemic drives up price of heroin, meth, and fentanyl

COVID-19 We are working on palliative measures — Makinde

COVID-19 and the Ecology of Death

Coronavirus: Ministers Donate Half Of Their Salaries To Support Govt Efforts

What Senate President said about Tinubu at 68

Dbanj Pours Out His Feelings 21 Months After Losing First Son

Why social distancing will be hard – Burnaboy reveals

COVID-19: Why we are not imposing 24hrs curfew now ― Sanwo-Olu

PREMIER LEAGUE: Players ‘furious’ about prospect of rushing to complete season by June

COVID-19: Why we are not imposing curfew now ― Sanwo-Olu

Senate President felicitates with Tinubu at 68

Pantami: The Gang-up Against Saviour of Nigeria’s Digital Economy, By Hashim Suleiman

Coronavirus: America to pay each citizen at least $1,200 each while they stay at home

COVID-19: I am now in self-isolation ― Makinde

Tonto Dikeh Reveals Plan To Deal With Her Employees

‘Mercy Stands Out From Other BBNaija Housemates’ – Uche Maduagwu

Frodd Slams Follower Who Asked Him To Go For Coronavirus Test

Akeredolu: The cause of Akure blast, vehicle buried by impact

COVID-19: FG to give stipends to Nigerians- Zainab Ahmed

Makinde speaks from self-isolation, calls for collective fight against Covid-19