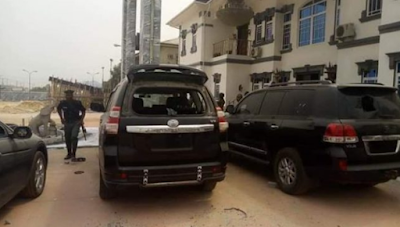 The Bayelsa State Police Command has imposed a three-day dusk to dawn curfew on the state.

The curfew was imposed following violence that broke out over Supreme Court ruling declaring Douye Diri of the Peoples Democratic Party, PDP, winner of the last governorship election in the state.

Commissioner of Police in the state, Uche Anozia, made the disclosure on Friday in Yenogoa, the state capital.

Anozie disclosed that the curfew will run from 8pm to 6am.


Recall that the Supreme Court had sacked David Lyon of the All Progressives Congress, APC, and declared Diri winner of the election.

Following the ruling of the court, the Independent National Electoral Commission, INEC, had declared Diri winner of the governorship election and issued him with Certificate of Return.

The action of INEC had led to crisis in the state as some angry youths said to be loyal to APC attacked PDP secretariats and some properties belonging to Diri.

Some angry youths has occupied major streets and the Government House on Friday morning, armed with APC flags and bearing placards, protesting the ruling of the apex court.

A nation and its unpreparedness

WHO chief urges end to ‘politicisation’ of coronavirus

Buhari, other African leaders stand with WHO chief after Trump attack

COVID-19: Why we are supporting Nigeria ― Pingjian, Chinese Ambassador

COVID-19: Shina Peller Calls Out FG Over Distribution Of Palliatives

Coronavirus: Nigerians advised for stay away from hospital ‘unless critically ill’

Coronavirus: Nigerians advised to stay away from hospital ‘unless critically ill’

Who wins the N150 million prize at ‘Access The Stars’ e-Finale on Saturday?

Treasury House Fire: Could it be what we are thinking? | The #YNaijaCover

Why NDDC failed to procure ventilators for Niger Delta – Pondei

No face mask, No shopping in Shoprite

FG to shut down oil refineries for upgrade — NNPC GMD

(BREAKING): Another batch of 281 Americans flown out of Nigeria

Gov Wike under fire for detention of Caverton pilots

COVID-19: NDDC fails to get ventilators to oil-states, gives reason