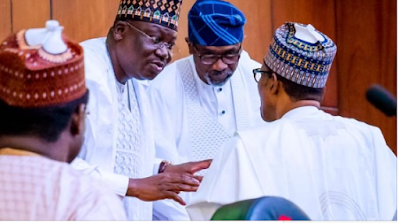 President Muhammadu Buhari says a lot of progress has been made working with the current national assembly.

Speaking at the national executive committee (NEC) meeting of the All Progressives Congress (APC) in Abuja on Friday, Buhari said the national assembly led by the current senate president has shown “so much commitment” to issues.

“For that reason I was pleased to mention yesterday that the ninth national assembly, you can see and read it in the papers, they have so much commitment on important issues and we make a lot of progress.


“This relationship, we will try and maintain, we cannot allow some of the things go public but I assure you that we have made a lot of progress.”

The president’s comment comes a day after Senate President Ahmad Lawan said any request Buhari sends to the national assembly would make the country a better place.

At a meeting with Itse Sagay, chairman of the Presidential Advisory Committee Against Corruption (PACAC), at his office, Lawan expressed willingness to approve of any request of the president.

Over 100 medics die in Italy’s coronavirus crisis, including two nurses who took their own lives

‘Congratulations Sir,’ is trending on Twitter and this is what it’s about

Gridlock surfaces on major roads in Ilorin amidst lockdown

Lockdown: We are still searching for Naira Marley – Police

Wike to Federal Govt: Why give Lagos N10 billion for COVID-19, and nothing to Rivers?

EPL: Ighalo may remain with Man Utd despite £400,000-a-week offer from Shenhua

“My Imagination Has Me Dating Drake” – Toke Makinwa

‘There’s going to be a lot of death’, Trump tells America as coronavirus spreads