One senator quits, another tears into Baudet as Forum collapse continues 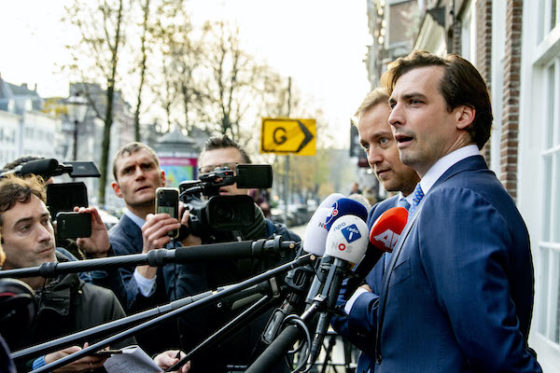 The collapse of far right party Forum voor Democratie continued on Tuesday evening, this time with the immediate resignation of senator and law professor Paul Cliteur, and the publication of a damning denouncement of party founder Thierry Baudet by another senator, Annabel Nanninga.

Cliteur said he had decided to leave the senate as a show of solidarity with Baudet, whom he tutored while a student at Leiden University.

‘Things have gone wrong and he has made mistakes,’ Cliteur said. ‘But you have to call him to account on his standpoint, not on app messages sent by the youth wing.’

Cliteur’s resignation followed that of Theo Hiddema, the party’s other MP alongside Baudet, who said he no longer felt able to serve in parliament. Both have been described by Baudet as ‘close friends’.

Baudet resigned as party chairman and leader for the 2021 election campaign on Monday following the publication of a number of racist and anti-semitic messages by the Parool newspaper. He will remain an MP.

A number of senior party members, including several senators, went public with their criticism of the decision to ‘investigate’ the situation within the youth wing rather than suspend members immediately.

The party’s fortunes in the polls have plummeted since reports of Baudet and others’ links with far right groups have circulated as well as Baudet’s support for conspiracy theorists such as anti-coroanvirus campaigner Willem Engel.

Nanninga, who also serves as a city councillor in Amsterdam, wrote a stinging attack on Baudet on website TPO.nl in which she accused him of damaging the party’s reputation by flirting with the far right and conspiracy theorists.

The weekend’s row had led to ‘nazi teenagers out for trouble being protected at the expense of the good name and integrity of around 100 FvD representatives’, Nanninga wrote.

She said she too had been on the verge of cutting up her membership card, but decided against it, on the condition that Baudet does not feature on the list of potential MPs and the party did its utmost to remove far right elements.

Baudet himself told reporters outside FvD headquarters in Amsterdam on Tuesday that he is ‘not yet finished with politics’.

In VPRO Tegenlicht: Perfect Me