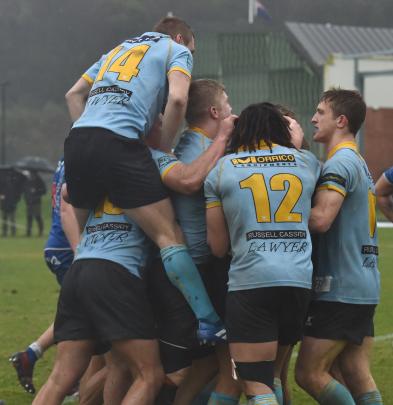 University players celebrate their win over Harbour in the semifinal at the University Oval on Saturday. PHOTO PETER MCINTOSH

University and Taieri will clash in next Saturday's club final after both sides recorded 10-8 victories in tight semifinals today.

As winter finally arrived in Dunedin, both games were played in wet and chilly conditions.

Univeristy got home at the University of Otago Oval over Harbour with replacement halfback Kieran McClea scoring the try to tie up the game in the last minute of the match.

University had pounded away near the end and McClea managed to slip a couple of tackles to score under the post. In the final act of the game, Mike Williams kicked the conversion to win the game for the students.

At Peter Johnstone Park, Green Island led 8-3 at the break and had a lot of territory in the second half.

But it could not add any points and Taieri scroed in the final 10 minutes through loose forward Brodie Hume from a lineout drive.

Josh Casey nailed the conversion from a handy position which was ultimately the difference between the sides.

The final will be played at Forsyth Barr Stadium next Saturday, kicking off at 4.15pm.

Avangard congratulated Zenit with the title: it's Time to match and take the Gagarin Cup
Coach of Orenburg Pro 0:1 with Rubin: Morally devastated, could have drawn
Kike Setien: Griezmann played a great match, understood Messi well, scored a great goal. We changed something
Barca President on the Real Madrid match: VAR always favours one team. I have an unpleasant feeling
Faty scored the 9,000 th goal in the history of Barcelona
Griezmann scored in La Liga for the first time since February with a pass from Messi
Suarez came out on the 3rd place in the list of the best Barca Goalscorers in history
Source https://www.odt.co.nz/sport/rugby/dunedin-premier-rugby/university-and-taieri-set-final-date

A Year Of Incredible Achievements And Interesting Times For Skills Active

Community Recovery Programme A Win For The Regions

Covid-19: New cases at the border? Ministry of Health to update

Kim Kardashian's concerns about Kanye West running for US president

Three killed in one day on Canterbury roads

Kim Kardashian's concerns about Kanye West running for US president

Family appeals for young killer Haami Hanara to hand himself in

Witnesses sought after man kicked and punched in central Dunedin

The brain gain: How returning high-skilled Kiwis will help NZ

The photo that's coming back to haunt Elon Musk

Friends reunion special: Covid tests and quarantine in the mix

'Going to burn you': Maxwell's swift revenge against Epstein victim

Double up: Hospital logo confused with Sexwise - and same agency designed both

The brain gain: Thousands of high-skilled Kiwis return - where will they work?

'She knows too much': Fears Ghislaine Maxwell will die in jail

Covid-19 may have originated outside China

Why Swedes buckled to Kiwi action in $1b+ takeover

Live: Have we gone three days without a new Covid case?

Formal request made: Pressure on Prince Andrew to speak to FBI

Young mum has only months to live after failed diagnoses

How to make capitalism work for all

Message to Scott Guy's killer: 'You are a coward'

Kylee's message to Scott Guy's killer: 'You are a coward'

Ominous clue in the case against Ghislaine Maxwell

Where stranded cruise ships are stuck