New Zealand
This article was added by the user . TheWorldNews is not responsible for the content of the platform. 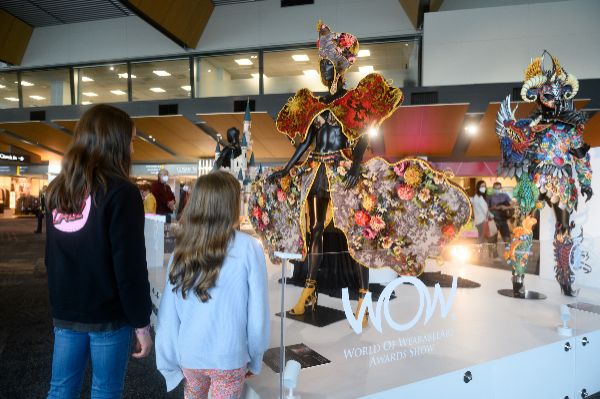 A taste of the World of WearableArt (WOW) has just landed at Wellington Airport.

Five award-winning entries from the WOW collection are now on public display in the airport terminal until showtime in September.

Wellington Airport’s Manager Brand and Sponsorship, Jo Maxwell says the exhibit is already a major hit with the travelling public.

“It’s great to see people literally stopped in their tracks, and a constant stream of pictures and selfies being taken.”

WOW attracts an audience of 60,000 people and contributes up to $28 million to Wellington’s economy. It’s part of an exciting line-up of major events for Wellington over the next few months including Wellington on a Plate, Beervana, and the All Blacks vs Ireland test match.

“We are delighted to have the opportunity to showcase these incredible works of wearable art at Wellington Airport. The detail and storytelling each designer weaves into their creations is really quite remarkable,” says Natasha Gordon, Head of Marketing, WOW.

“The team at WOW can’t wait to reveal the 2022 finalists at the WOW Awards Show this Spring. We have some exciting treats in store for audience members.”

Wellington Airport provides a world class airport for visitors, the Wellington region and New Zealand. It's international terminal, The Rock, is ranked 4th best in the World. Being very close to the CBD saves 5.4 million travellers plenty of time and makes Wellington a more attractive place to visit. The Airport won the Wellington Gold Awards for Safety and is a major supporter of local events, attractions and community groups.

'I know a person when I talk to it': Google AI has become sentient, warns engineer

'I know a person when I talk to it': Google engineer warns AI has become sentient

Gynaecological Examination Chairs Market Is Set To Expand At A CAGR Of 6.9%

Abuse in foster-care inquiry to begin

On this day in 2010, Virat Kohli made his T20I debut against Zimbabwe

Mysterious fireworks display over Auckland solved: Who lit up the sky?

Complaints about nude bathers or their behaviour on Pāpāmoa Beach revealed

Complaints about behaviour of nude bathers on Pāpāmoa Beach revealed

Two dead in crash near Otorohanga

Delays, shortages and strikes: Can the global aviation industry get airborne in time?

'I'm an ironwoman': Bride in wedding day chopper crash shares journey to hell and back

Exclusive: To hell and back - bride in wedding-day chopper crash tells of pain, survival

'Batten down the hatches': Winter storm to 'ramp up' as heavy rain, winds and snow batter NZ

'I literally wouldn't be here if it wasn't for blood donations': Sisters' unique bond

Chef in the middle of TVNZ-Three MasterChef ratings war

The rise and rise of Japan's unsackable slacker

Sky-high airfares: How the Govt could help ease the pain for travellers

How British journalist vanished deep in the Amazon

Vanished deep in the Amazon: New clue in search for missing journalist

Sasha Borissenko: A look at prisoners' rights - and earnings

India to pitch for 'fair and just' talks, outcomes at WTO ministerial in Geneva

The secret life of Auckland's CBD: The good, the bad, the ugly

Opinion: A couple of comments you should read instead of Louise Wallace's fat-phobic nonsense

Marriage is between man and woman: School under fire over 'discriminatory' statement

Marriage is between man and woman: School under fire for 'discriminatory' statement

'Utterly tragic': Newborn's death - why dialling 0800 for ambulance was a factor - coroner

'Utterly tragic': Newborn's death and why dialling 0800 was a factor - coroner

Matt Nippert: I spent two weeks scamming the scammers. This is what happened

Derek Cheng: Poor or invisible ministers - why Labour is losing the law and order debate