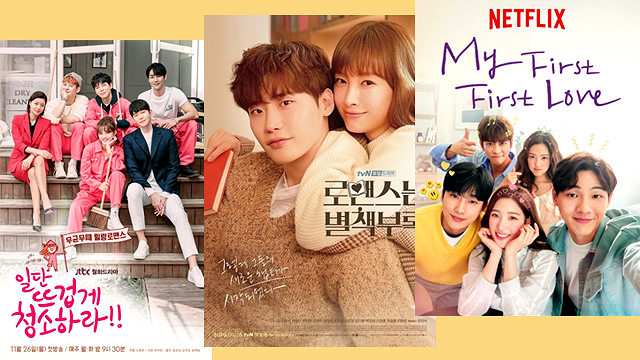 (SPOT.ph) If you need to take a breather from the daily grind, one great way to "escape" reality is by watching feel-good shows and movies. K-Dramas, for one, offer a wide selection of inspiring  coming-of-age tales, stories that revolve on second chances, and comic relief from unconventional plots and characters. Step back and take a break with this selection of Korean Dramas.

Have a good laugh or get your dose of romance from these light and easy-to-watch K-Dramas:

While the initial episode is a little heavy, it’s a delight to follow the story of a mother who goes after second chances in her career and in love. Former successful advertising copywriter Kang Dan Yi (played by Lee Na Young) gets into a publishing house by lying about her credentials. She later finds out that the company is headed by Cha Eun Ho (Lee Jong Suk), her childhood best friend.

Clean With Passion for Now is centered on two extremely different people, Jang Sun Gyeol (Yoon Gyun Sang) and Gil Oh Sol (Kim Yoo Jung). Sun Gyeol has a severe case of mysophobia or fear of germs, so it comes as no surprise that he owns and manages a cleaning company called Cleaning Fairies. He meets the charming Oh Sol who doesn’t really care about her personal hygiene. Their opposing traits create an interesting dynamic for the story and makes for a fun watch!

If you’re looking for something that’s extra fluffy with an easy-to-follow plot, then What’s Wrong with Secretary Kim is right up your alley. Park Seo Joon plays Lee Young Joon, a pompous vice president of a company alongside Park Min Young, who plays secretary Kim Mi So. While Young Joon’s arrogance makes Mi So want to quit, their interactions together will make your heart flutter.

Unlike most K-Dramas, Welcome to Waikiki centers more on comic relief rather than romantic encounters. The TV series focuses on Kang Dong Goo (Kim Jung Hyun), Cheon Joon Ki (Lee Yi Kyung), and Bong-Doo-Sik (Son Seung Won), frustrated artists who run a hostel in Itaewon, Seoul in the hopes to finance their dreams of producing a film. It’s packed with comical moments and crazy antics—all in the name of making their dreams come true.

If you haven't had enough of the Grim Reaper-and-Sunny love team in Goblin, this K-Drama is for you. In Touch Your Heart, Yoo In Na takes on the role of Oh Yoon Seo, a once-successful Korean actress who got involved in a drug scandal. After two years of inactivity, she is given another chance for a role as a lawyer but only if she learns the ropes in a law firm and where she meets Kwon Jung Rok (Lee Dong Wook). They get off on a rocky start but things take a turn for romance as the couple develop feelings for each other.

This heartwarming coming-of-age drama stars Ji Soo, Jin Young, Jung Chae Yeon, Kang Tae Oh, and Choi Ri, a group of friends who somehow ends up living under one roof. The series does not only focus on the idea of “first love,” as the title implies, as it centers on youth, friendship, and the concept of figuring out what you truly feel and want.

There’s nothing like a good ol’ time-traveling K-Drama for a good laugh. Heo Im (Kim Nam Gil) comes from the Joseon era and is recognized as one of the best acupuncturists and healers of his time. He is transported to present-day Seoul and crosses paths with Choi Yeon Kyung (Kim Ah Joong), a cardiac surgeon who believes only in modern methods. Despite their initial differences, Heo Im becomes Yeon Kyung’s apprentice and slowly adapts to contemporary medicine. Along the way, they eventually discover that their destinies are intertwined.

Unlike most rich, male leads in K-Dramas, Kang Ji Sung or Louis (Seo In Guk) from Shopping King Louis isn’t actually arrogant. It’s just that he spends...a lot. He would buy anything that catches his eye no matter what the price tag is. The shopping habit ends when he loses his memory. Louis then meets Bok Shil (Nam Ji Hyun), a simple woman who teaches him to be content with having only what he needs.

If you enjoy a character breaking the fourth wall, then give Extraordinary You a try. Eun Da Oh (Kim Hye Yoon) isn’t exactly thrilled when she finds out that she’s just a support character in a comic book titled Secret and that her life was being written out for her. She decides to go after her own fate, and of course, her true love, who happens to be a nameless character in the comic.

While the premise of I’m Not a Robot is quite heavy, the little plot twists make it especially fun to watch. Min Kyu (Yoo Seung Ho) lives with anthropophobia or the fear of people. He lives in isolation, thinking he’s actually allergic to human contact. He comes across Aji-3, a robot assistant who will act as a personal maid and happily purchases one. Unbeknownst to him, the “robot” sent to him is actually the human being who Aji-3 was based off of (Jo Ji A, played by Chae Soo Bin).

Are you sure you want to delete this list?

ADD YOUR OWN FAVE

Share your favorite if we missed it! Type your pick here and tell us why you love it.
+ Add to list

Check out another top 10 article we hope you'd like:

Klopp, Lampard, Rodgers and Wilder claim the award for the best coach of the Premier League, Pep-no
The authors of Showsport choose the winner of the Champions League: Chernyavsky - for Leipzig, Muiznek believes in real 🤪
Trent, rashford, martial and Greenwood are up for the award for the best young player of the season
Ronaldo started the 2016-17 season poorly – and then scored 10 goals in the Champions League play-offs and produced the best performance in the history of the tournament
Henderson, de Bruyne, Pope and Ings is among the contenders for the award for the best player of the Premier League season
The Bundesliga plans to start the season on September 18 with a match between Bayern – Schalke or two Borussia
Barcelona announced 7 reserve team players for the match with Napoli. Dembele, Vidal and Busquets will not play
Source https://www.spot.ph/entertainment/movies-music-tv/82741/light-k-dramas-for-a-breather-a4670-20200705-lfrm

400 Filipinos expected to be flown out of Lebanon next week

Pagasa: LPA may intensify into tropical depression in coming days

Russia’s race for virus vaccine raises concerns in the West

Sam Milby believes Catriona Gray is ‘The One’

Lakers not exactly rolling along as playoffs approach

Chance to face Tyson ‘too incredible’ to resist, says Jones

‘Love Life with Kris’ might not preem on schedule

Kevin Durant picks Clippers to win it all in NBA restart

3 Wyoming sightseeing balloons crash, as many as 20 injured

10 of the Funniest Names Suggested for Pasig's COVID-19 Lab

Number of Pinoys killed in Beirut blasts rises to 4

WADA to reduce bans for recreational drugs from 2021

4 accessories that will help you bike to work

Children in regular contact with nature could suffer from eco-anxiety, study finds

Abstract art can change our vision of time and space, new study finds

Leclerc hits back at racism accusations for not taking a knee

29 Isabela villages on lockdown due to COVID-19

COVID-19 tests of dialysis patients in Marikina to be prioritized

Cheers! The Philippines Ranks High Among Asian Countries That Search for Beer

Five shows to watch this August: ‘Lovecraft Country’, ‘World’s Most Wanted’, others

Health workers in provinces told: Honor your oath, gov’t to protect you in COVID-19 fight