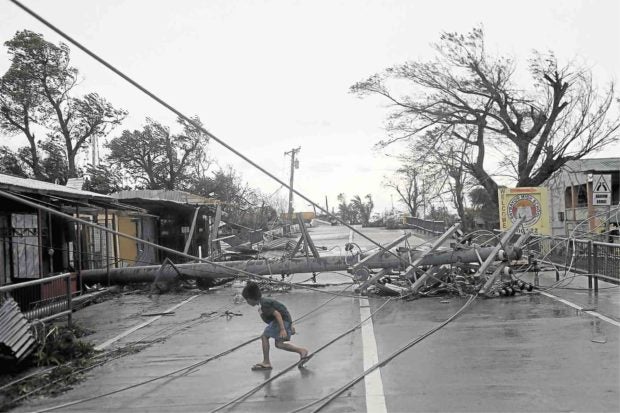 In Alcala town, a fallen electric post blocks a section of the Alcala-Baggao Road

BAGGAO, Cagayan — Corn farmer Jacinto Pagallaman, 54, wondered why more than 24 hours after Typhoon “Ompong” ripped the roof off his house at Barangay San Jose here, no government agency had reached his town.

Ompong (international name: Mangkhut), the world’s most powerful typhoon so far this year, made landfall in this town at dawn on Saturday.

“Sadly, they’re not here when we need them most. None, not even a pack of noodles,” Pagallaman said of government agencies, as he sifted through the flattened cornfield he had tilled for 12 years.

“This cornfield seems to symbolize how we’re so down right now,” he said.

Struck by a second strong typhoon in a span of two years, Cagayan folk displayed disaster preparedness and resilience on Saturday.

But they wondered whether this sturdiness was working to their disadvantage.

“I guess they (in the government) know Cagayanos are strong, which perhaps, makes them a little slow to respond,” Pagallaman said.

President Rodrigo Duterte assured the public on Sunday afternoon that the government was well prepared to respond to the needs of those affected by the typhoon.

“I just want to assure the people that [that] government is present,” the President said in Tuguegarao City as he presided over a situation briefing on the effects of Ompong.

“When (Fidel) Ramos was the President, he’d always emphasize on us that we go back to normalcy as soon as possible,”  he added.

The President conducted an aerial inspection of badly hit areas in Cagayan and Ilocos Norte. He is expected to fly to Baguio City on Monday and to Isabela province on Tuesday.

Baggao bore the brunt of Ompong.

Packing sustained winds of 205 kilometers per hour and gusts of 355 kph, the typhoon left a landscape of massive devastation in the towns lying on its 900-km diameter westward track, flattening rice and corn farms, punching holes on rooftops, twisting power lines in areas nearest its eye.

From Baggao, Ompong’s 50-km eye swirled through Alcala, Gattaran, Lal-lo and Lasam towns, roared toward Pudtol and Flora towns in Apayao, and stomped over Laoag City before it exited to the West Philippine Sea on Saturday night.

“From its landfall to the time of its exit, the eye of Ompong spent more than eight hours on land,” said weather specialist Romeo Ganal Jr. of the Philippine Atmospheric, Geophysical and Astronomical Services Administration.

But for many Cagayan residents who felt the brute force of Ompong, the typhoon’s destructive force seemed to have lasted way too long, even stronger than Supertyphoon “Lawin” (international name: Haima).

“We started to feel the effects of the typhoon at around 10 p.m. (on Friday). By Saturday noon, strong winds still made staying outdoors dangerous. Its force seemed endless,” said 85-year-old Reginaldo Centeno, who had to flee his house at Barangay Pagbangkeroan on a bank of the Cagayan River.

From the national highway in Alcala to the town center of Baggao, the wrath of Ompong laid out a landscape of devastation, taking its toll mostly on huts and wooden houses, at times blowing down entire houses like exploded matchboxes.

The hills of cornfields were flattened like well-combed hair, littered with GI sheets and branches of trees.

The roads were blocked by sagging electrical wires from broken electric posts.

Residents in Alcala town, too, wondered what took relief efforts too long to arrive.

“We have no idea [why no help has arrived]. But that’s not a problem; this is our life,” farmer Danilo Guiab, 54, said on Sunday, as he started to make repairs on his blown-down house at Barangay Baybayog.

But the damage was more difficult to bear for Aida Erpelo, 55, whose “sari-sari” store was smashed into pieces, scattering and blowing away its contents.

“The wind threw off everything inside the house, including our rice canister. We have nothing to cook,” Erpelo said.

School principal Roger Duco scanned the damage to his school, grimacing as he took photos with his mobile phone. “This might take many more years to be replaced,” he said.

In Lal-lo town, Lydia Domingo, her husband Anacleto and their handicapped son, Georgy, were just thankful they survived after their house at Barangay San Lorenzo was crushed by strong winds, drenching both of them for hours.

“We will just try to start anew,” she said. On Sunday, they started to rebuild their house, with her husband going to the town center to buy nails and plywood.

Their neighborhood, too, has yet to be reached by government relief efforts.

“I have stopped expecting any help from [the] government at times like these. I have seen too many favoritism in the distribution of aid,” said rice farmer Faustino Laporga, 86. Even at his age, he still dries palay (unhusked rice) on the roadside.

“I just hope [the] government will also do something to help the farmers after this typhoon,” he said.

The pain of losing their house to the typhoon was too much to bear for Feida Pablo, a mother of three who was wailing beside a pile of soiled clothes.

She recalled the troubles she and her husband had to go through investing in their 3-year-old house at Barangay San Pedro in Lasam town.

“After more than 30 years of marriage, this was our only chance to own a house. And just like that, it got wiped out in an instant,” she said.

At a corner of the crushed house sat her drunk husband, Marcelino. “He could not bear the pain, so he’s just trying to drown his sorrows,” Feida said. —WITH A REPORT FROM JULIE M. AURELIO IN MANILA

Borussia agreed to transfer 17-year-old midfielder Birmingham Bellingham for 23 million euros
Getafe goalkeeper Soria on 0:1 with Real Madrid: a Draw would have been fairer
Courtois has kept 16 clean sheets in the League – more than anyone in the top 5 leagues of Europe
Ex-referee Andujar Oliver: Carvajal was clearly knocked down in the Getafe penalty area. A clean penalty
Carvajal on 1-0 with Getafe: we Should have taken advantage of Barca's misfire. Everything depends on us
Gattuso on 0:2 with Atalanta: I'm furious. I didn't like the attitude of the players
The match between city and Liverpool in an empty stadium is a very strange feeling. Pep reacts to a reporter shouting, Gary Neville can be heard across the podium
Source https://newsinfo.inquirer.net/1033139/cagayan-town-bears-brunt-of-typhoon

US issues guidelines but no new rules for safe air travel

DOH: No wakes for OFWs who died of coronavirus in Saudi

‘Economic recovery may begin in Q3’

Our hopes for stability in Hong Kong

Put my finger into the nail marks

49 jeepney routes to return to the streets | Evening wRap

Plight of children with disabilities ‘exacerbated’ by COVID-19 lockdown – group

Johnny Depp libel case in UK can go ahead – judge

European banks team up to offer alternative to Visa, Mastercard

Eerie atmosphere for early arrivals at belated Formula One opener

DOTr to buy 2,000 chairs for NAIA Terminal 3 to ease woes of stranded persons